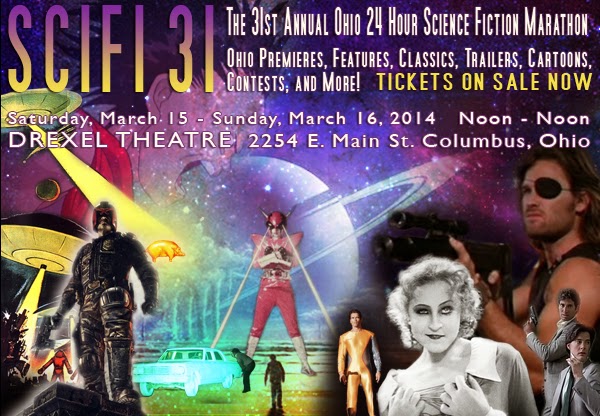 Ever since LeBron left, the only thing significant about Cleveland, we can all agree, is the Case Western-Reserve University Science-Fiction Marathon, a customary kickoff to the winter-spring series of the CWRU Film Society.

If you are reading this now...you missed it. It was over months ago. And you probably couldn't have gone anyway. The CWRU Sci-Fi Marathon, for reasons only known to the evil secret society that assures everything in Cleveland goes wrong, happens in mid-January: bitter cold, blizzards, icebergs, glaciers, your severance-pay money running out from your job layoff at Thanksgiving, and the trail end of your bout of food poisoning from Christmas dinner.

Yes, you've missed out on the CWRU Sci Fi Marathon. But I like using that line about LeBron.

And I also like to call attention to something truly frightening. Many years ago a similar science-fiction marathon in Columbus would take place exactly a week after the grueling CWRU sci-fl and fantasy endurance test. I actually heard that hardcore devotees would undergo the CWRU marathon, spend a few days recovering, then go downstate and do it all again the subsequent weekend.

This was when Clinton was in the White House. We all had things better then.

But, unlike you, perhaps, the Columbus marathon has not been downsized out of existence or been outsourced to the Third World. It has simply moved down the calendar a few months.

And you do have the time and opportunity to attend. The 31st annual Ohio 24 Hour Sci Fi Marathon convenes on Saturday, March 15, at noon and runs to that same time on Sunday, March 16, thus saving you the trouble of booking a room overnight somewhere. The venue is the Drexel Theatre, one of Columbus’ better-established art houses, at 2254 E. Main St.

Film showings include REPO MAN, the restored version of METROPOLIS, the Japanimation landmark AKIRA, the atypical flying-saucer B-movie from the late Ray Harryhausen that is EARTH VS. THE FLYING SAUCERS and many others. What distinguishes the Columbus marathon from the CWRU Sci Fi Marathon (besides the fact that Columbus possibly has more job opportunities, and LeBron never dissed the place on national network television) is that this event occasionally brings in special guests and regional premieres. The title has mysteriously vanished from the marathon website (www.scifimarathon.com), but I was sure I saw the announcement that there would be showings of episodes of “Danger Five,” a culty Australian web-based series that reimagines WWII in terms of a moddish 1960s James Bond/Derek Flint/BARBARELLA type spy fantasy, filled with gadgets, robots and mutants.

Like I said, it disappeared mysteriously. After several hours at a Sci Fi Marathon, reality does tend to warp. I speak from experience, the Columbus event being perhaps the only movie science-fiction marathon that I attended for any serious span of time. It was part of a scheme to impress a girl (it didn’t work, naturally).

Better luck to you though, especially in the costume contest and other fringe events. Admission to the Ohio 24 Hour Sci Fi Marathon is $37 in advance ant $40 at the door, while ticket supplies last.
Posted by Charles Cassady Jr. at 3:17 AM