The Selfish Giant (March 13th and 14th at the Cleveland Cinematheque)

[THE SELFISH GIANT screens Thursday March 13th at 9:00 pm and Friday March 14th at 7:30 pm at the Cleveland Cinematheque.] 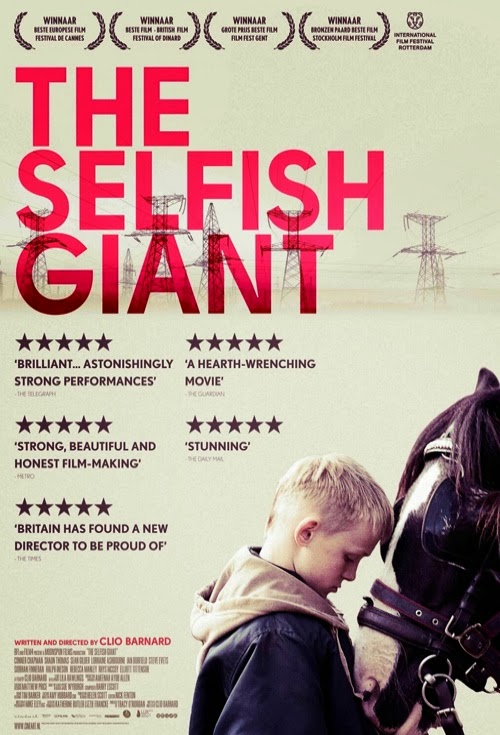 THE SELFISH GIANT, a bleak, rough-and-tumble British film, takes its title, and its inspiration, from a children's fable by Oscar Wilde, about a mean giant's transformational encounter with two children. Writer-director Clio Barnard's version is set in Northern England and centers on two working-class 13-year-old boys who start working for a “selfish giant,” a shady scrap-metal dealer named Kitten (a very sinister Sean Gilder). One boy, Arbor (Conner Chapman), is subject to behavioral fits and is constantly taunted by other boys. He also likes to fight, which gets him “excluded” permanently (expelled) from school. Arbor's older brother Martin (Elliott Tittensour) is a drug addict who steals Arbor's medications, and his single mom (Rebecca Manley) is at wits' end handling her unruly boys.


Arbor's only friend, a gentle, chubby boy called Swifty (Shaun Thomas), is unlucky enough to be one of the many children of “Price Drop” Fenton, an ill-tempered modern Macawber, forever in debt. The family's furniture is constantly being repossessed from under them.


It's no wonder the boys are attracted to the illicit trade of stealing utility cable and selling it to Kitten, who teaches them to burn off the identifying casings and dye from the ill-gotten wires, grudgingly paying them for their risky labors with cash.

For Arbor, the “job” is a source not only of money, but of a new identity. “I'm a proper scrap man, me,” he says proudly, piloting horse and cart in pursuit of valuable metals. For Swifty, there's a dual allure. In addition to helping pay his family's debts, he gets to pursue his passion for horses. When Swifty proves his skill at handling Kitten's prized harness horse, Diesel, Kitten selects him to drive the sulky in one of the town's raucous, high-stakes road races. Arbor, whom Kitten despises, feels left out, and the boys' friendship is strained. Arbor belittles Swifty's equine ambitions. “What's the point in a trotting horse?” he scoffs. “They can't pull a cart.”

Although the film is inspired by Wilde, the influence of Dickens is felt in the exploitation of poor children to perform dirty, dangerous jobs. “There's some unscrupulous people out there getting kids to do their dirty work,” says a police officer who questions Arbor after some kids are spotted burning cable. “That Kitten is using you,” warns his worried mother, to no avail. Arbor starts stealing copper from Kitten, which sets in motion events that lead to tragedy.

Cinematographer Mike Eley uses a muted palette to paint the rural-industrial beauty of Bradford, West Yorkshire, and the sound design — note the ominous hum of the overhead power lines the boys contemplate stealing — is masterful. Barnard, whose first fiction feature this is, has a graceful, intuitive feeling for the lives and colloquial language of her characters. Toughness and beauty meld perfectly in this exquisite little film, which resonates on a high emotional octave. 4 out of 4 stars.