The Pawnbroker (March 8th and 9th at the Cleveland Cinematheque)

[THE PAWNBROKER screens Saturday March 8th at 7:10 pm and Sunday March 9th at 8:30 pm at the Cleveland Cinematheque.] 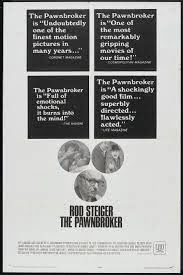 The international news media noted the death of Czech-born pianist Alice Herz-Sommer, the oldest known survivor of the Nazi Holocaust, passing away in London hospital at age 110. She ascribed her longevity - after witnessing the horrors of the Terezin prison camp and losing her husband and family members in the genocide - to keeping an upbeat attitude, and devoting herself to a love of music. She manifested an ennobling view of the human race, saying often that there is much good as well as bad, and there always has been.

What makes the obituary particular poignant is that Herz-Sommer had just been profiled in the documentary short film THE LADY IN NUMBER 6, which has garnered an Academy Award nomination. It was even reviewed by me on this blog, so the news that Alice is no longer with us set me to thinking:

Surviving a Final Solution death camp just downwind of Auschwitz...living to convey a message of hope and optimism past a full century...Seeing the rise and fall of Soviet Communism, German and Italian Fascism, Japanese Emperor-worship militarism, Red-scare McCarthysm, fanatical Chinese Maoism, death-squad-friendly Reaganism...yet when did the amazing Alice Herz-Sommer's health finally give out? What finally brought her down? WHEN SHE GOT INVOLVED IN MOVIES, THAT'S WHEN!

I can imagine what happened. Probably the by-now familiar story. After the camera crews showed up, everything changed in Alice. There were probably torrid affairs with Clooney and DiCaprio and Depp (Alice being on the rebound after the inevitable text-message breakup with Bieber). The sex tapes with Charlie Sheen. Alice going on David Letterman and/or Jimmy Fallon, clearly stoned on heroin, flashing and "twerking" the embarrassed host. Her awkward, obviously drunken piano solo at the Superbowl half-time show, lip-syncing her Mozart keyboard work and exposing her nipple to a startled Motley Crue. The riotous run-up to her 110th birthday party, with the TMZ footage of the old woman trying to run down paparazzi with her limo, as her desperate passengers/lesbian crushes Lindsay Lohan and Miley Cyrus attempted to wrestle the wheel away, screaming, "You're out of control, Alice Herz-Sommer! Have you no dignity or decorum?"

But let us not dwell on the manner in which Alice Herz-Sommer died, but celebrate her long, rich life and healthy outlook.

One not shared with the title character of THE PAWNBROKER, Sidney Lumet's landmark 1965 Holocaust-tinged drama.

Other filmic narratives had mentioned the extermination camps, and, of course, ghastly newsreel footage of the tangled corpses at the ovens of Auschwitz and Dachau provided imagery that was burned on the brains of generations. But in most American films, such as DIARY OF ANNE FRANK, prevailing morality and studio censors would only let you get so far in hinting at the fate that awaited Jews. Most of them just let sympathetic characters get dragged off by the Gestapo, and the viewer was left to imagine the rest. It would take a while for SCHINDLER'S LIST and others could begin to approximate the brutality and horror. Lumet's urban drama (based on a novel by Edward Lewis Wallant that I can't say I've read yet but, like SCHINDLER, filmed in mesmerizing black and white) was a strong step in the direction of showing the unshowable, even with its concessions to melodramatic symbolism.

Without ever using the psychobabble term, it's about post-traumatic syndrome suffered by Sol Nazerman (Rod Steiger), a bitter, aging Jewish immigrant, living on Long Island but commuting to Harlem to operate a black-gangster-owned Harlem pawn shop, some 20 years after V-E Day. Sol's entire family perished in the death chambers - and not all of Sol got out safe either. "Europe is a graveyard," he tells a friend who suggests he take a vacation there.

Though he's lost his faith and is emotionally shut down to most of the world, Sol still maintains guarded relationships with his regular clientele of ghetto misfits, and he tolerates his upbeat young Hispanic assistant Jesus (Jaimi Sanchez). Bit by bit, however, incidents trigger shock-cut flashbacks, to the concentration camps and cattle-cars. A bare-breasted girl-of-the-streetz cues memories of Sol's wife as a stripped-naked inmate, a barking dog becomes a snarling German shepherd on patrol as a dying prisoner hangs from barb wire, and so on. Finally, a fresh tragedy, violence and loss triggers a cathartic breakdown in Sol's reserve. [SPOILER ALERT MACH SCHNELL! MACH SCHNELL!] You didn't think a nice-guy character would be named Jesus and get out of this thing alive, did you?

Unlike the statements made by Alice Herz-Sommer on the transformative power of music and hope that carried her through the darkest era, there's no guarantee here that Sol will emerge a better, more reconciled person after the climax. Some things just won't heal. THE PAWNBROKER pushed the envelope for themes, nudity and intensity, even if Lumet only inserts the visceral strong stuff for cuts lasting a few seconds or less. Still, best remember that THE PAWNBROKER exhibited in an era when THE SOUND OF MUSIC was the rosier alternative of the Nazi era. Steiger received a Best Actor Oscar nomination, and soundtrack composer Quincy Jones would go on to make quite a name for himself. (3 1/2 out of 4 stars)