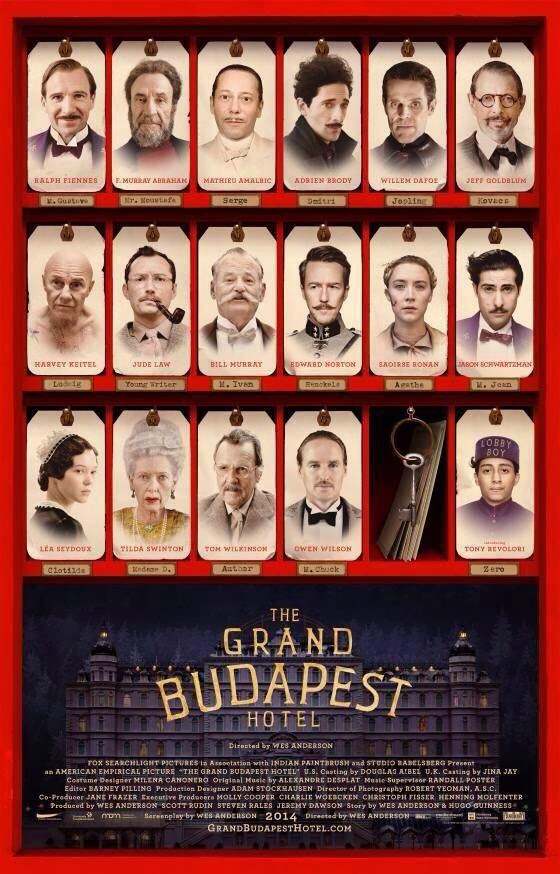 “Love/hate relationship with Wes” and “Can't stand quirky for quirky's sake” are the titles of two contentious comment threads on the movie website imdb.com. Participants in these conversations vociferously debate the merits of director-writer Wes Anderson, who is known for his quirky, stylized films, the eighth of which is THE GRAND BUDAPEST HOTEL. Set in an aging, once-elegant hotel in the mythical Republic of Zubrowka, it is perhaps the apotheosis of Anderson's stagebound, confectionary style. And, like the Courtisane au Chocolate, the fancy pastry that figures in the movie's Byzantine plot, it may be too cloying for some.


I, too, have had a difficult relationship with Anderson's work, sometimes finding that the artificiality gets in the way of total engagement with his stories. It occurred to me at some point that Anderson's films have a core of deep sadness. Beneath the layers of cute stylization, the stories are about children or grown-up children who feel orphaned, lost and alone. Toward the end of THE ROYAL TENENBAUMS, Chas, the young widower played by Ben Stiller, crashes his sports car and breaks down, softly sobbing to his estranged father, “I've had a rough year, Dad.” It's just a moment, but so emotionally real it cuts through the arch tone and hits you, hard. (Anderson has said it's the most important moment of the movie.) THE DARJEELING LIMITED is even more nakedly emotional, about three grown brothers reconnecting on a train ride through India. The film has Owen Wilson's character saying things that echoed his own troubled life at the time (he attempted suicide before the movie was released), and provides the indelible image of a forlorn Adrien Brody carrying the lifeless body of an Indian boy he couldn't save from drowning. MOONRISE KINGDOM was about an orphan boy nobody wants who uses his wits to find his own way, and along the way finds an unlikely father.

There are elements of the “lonely little boy” theme in THE GRAND BUDAPEST HOTEL -- a young refugee bellboy marries an equally solitary pastry cook -- but the focus here is on one superbly drawn character, Gustave H., the epicene 1930s hotel concierge magnificently enacted by Ralph Fiennes. Demanding perfection from his staff and fussing over, flattering and romancing his elderly, rich women guests in a manner that would put The Producers' Max Bialystock to shame, M. Gustave is the bitchy, irresistible sun around which the large cast orbits. Several times Gustave protests that he's not homosexual, an assumption that arises from his legendary fussiness. He reprimands one of his elderly guests/paramours, the dowager countess Madame D. (Tilda Swinton in all kinds of old-age makeup), that the color of her nail polish is so wrong it makes him sick. Gustave explains his predilection for old ladies as a compromise borne of his own advancing age. “The cheaper cuts,” he tells his protege, Zero, “are more flavorful.” He's like a hetero Liberace, only with impeccable taste.


The visual style is characteristic Anderson, centering on an the elaborately imagined diorama of a hotel. The Grand Budapest, once renowned for its opulence, is first seen in its derelict present-day condition, shabby and all but empty, “an enchanting old ruin.” The script, co-written by Anderson and Hugo Guinness and “inspired by” the writing of the Austro-Hungarian author Stefan Zweig, is a story-within-a-story. Jude Law plays Young Writer (that's his only name), who takes up residence at the hotel in order to write. Curious about the hotel's past, he talks to a permanent guest, Mr. Moustafa (F. Murray Abraham), who tells Young Writer the story of the Grand Budapest's history and especially of Moustafa's mentor, M. Gustave, who hired him to be a Lobby Boy, Anderson's whimsical version of a bellboy (they wear purple Philip Morris-style caps that read LOBBY BOY.) Suspend disbelief and trust that the refugee Lobby Boy named Zero, played by the young Guatemalan actor Tony Revolori, grows up to be F. Murray Abraham, and watch the colorful yarn unwind.

In the tense period between world wars, word reaches Gustave that the Madame D., who had a fearful premonition before leaving the hotel, is dead. Was she murdered? Gustave enlists Zero on a train trip to Madame's villa where the he learns that she has bequeathed him a valuable painting. The bequest sparks the enmity of Madame D.'s sleazy son, Dmitri (Adrien Brody), who vows that the “ruthless adventurer” and “fucking faggot” Gustave will not have the priceless “Boy With Apple.” Gustave and Zero spirit away the painting, which sets off a chain of antics and lethal events and lands Gustave in prison for a time. A large number of Anderson's favorite actors turn up in small roles, including Bill Murray, Jason Schwartzman, Bob Balaban, Jeff Goldblum, Willem Dafoe and Owen Wilson. The movie is a real boys' club, apart from Swinton and Saoirse Ronan, as Agatha, a pastry chef with a large port wine stain on her cheek, who becomes Zero's bride, and whose courage and sublime cakes help save the day.

Over the busy proceedings hovers an air of impending fascist doom. Twice Gustave is questioned by gun-toting soldiers while traveling by train; only once does his silvery tongue save him and Zero. Costume designer Milena Canonero's conceptions are memorable; I especially liked the Nazi-type leather trench coats, emblazoned with “ZZ” instead of “SS”.  M. Gustave is about style, not ideology, and his take on the occupying regime is sartorial: “I find these black uniforms very drab.” Alexandere Desplat, who has scored previous Anderson films and seems to have the busiest composing pen in Hollywood, contributes an appropriately emotional, middle-European-sounding score.

All of these embellishments are lovely but ephemeral. The thing that will be remembered about this film is Fiennes' fine performance as the magnificent M. Gustave.  3 1/2 out of 4 stars.