[THE FACE OF LOVE opens Friday March 28th at the Cedar Lee.] 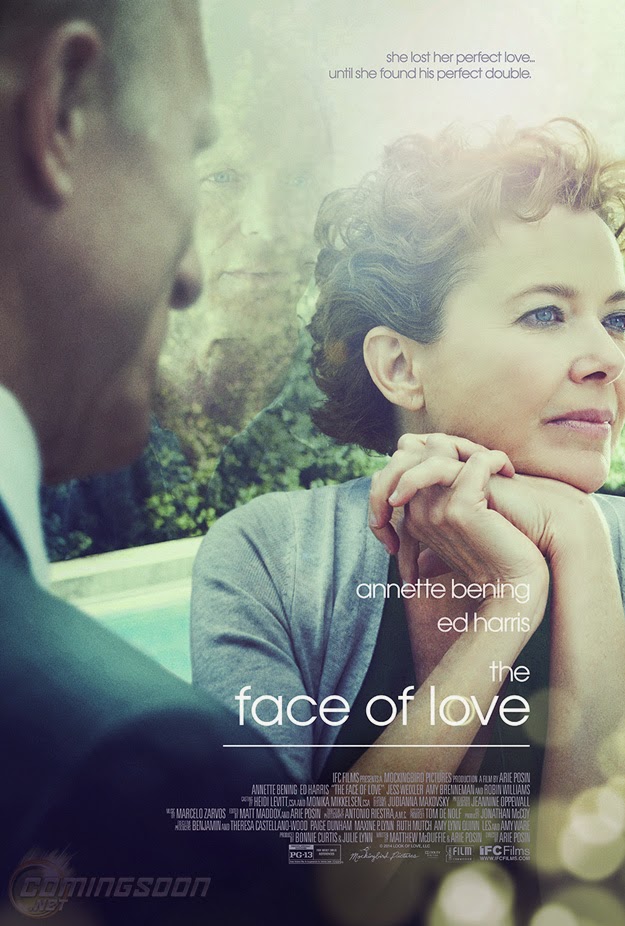 There are two good reasons to queue up for “The Face of Love:”  Annette Bening and Annette Bening. Maybe a third reason if you count the always welcome Ed Harris, despite the estimable chrome dome being saddled with a soggy punchline of a role. Directed and co-written by Arie Posin whose promising 2005 debut, THE CHUMSCRUBBER, was barely released despite its illustrious cast (Ralph Fiennes, Jamie Bell, Glenn Close, et al), the considerably less ambitious LOVE is essentially a Lifetime flick with movie stars.

But what stars! Bening remains a glowing, radiant force of nature, and it’s her incandescence, talent and great bone structure that make Posin’s film not only bearable, but even mildly compelling. A fiftysomething widow who “stages” houses for realtors (hey, it’s Southern California), Bening’s Nikki has the shock of her life when she spots a doppelgänger (Harris’ Garrett) for her late husband Tom (Harris again) while visiting an art museum. After stalking Garrett for awhile—she does some internet snooping and learns that he teaches at a local college—the pair finally “meet” (under the circumstances, it’s less of a “meet-cute” than a “meet-creepy”). Since Garrett is the spitting image of Tom, Nikki does her best to keep their nascent relationship secret from her grown daughter (an excellent Jess Weixler) and widower neighbor (Robin Williams trying a little too hard not to be “Robin Williams”) lest they get the, y’know, wrong idea.


It’s a silly, soapy,  potentially risible set-up rife with supernatural underpinnings that Posin and co-scenarist Matthew McDuffie apparently had zero interest in exploring. (Just call it “Nowhere in Time”.) While I didn’t miss the dewey-eyed New Age romanticism a more commercially calculated approach might have trafficked in, Posin fails to replace it with anything particularly substantive. Everything here remains at surface level—we’re supposed to take it on faith that Tom had a double living in the exact same city (Los Angeles), and that his widow would have the great good fortune of crossing paths with him five years after his death—so the whole thing just feels kind of desultory.

It also has the unfortunate side effect of making Bening’s character seem a tad dense. She’s apparently so grateful to have found a physical replacement for her beloved late husband that she doesn’t even question the complete and utter strangeness of the situation (e.g., “How is this even possible?,” or “Am I losing my mind?”).

In a misguided attempt at discretion or maybe good taste, Posin shies away from the melodramatic potential of the material rather than embrace it head-on. (Imagine what a 1950’s-era Douglas Sirk could have done with Posin and McDuffie’s half-baked script!) Yet, because it smacks more of Nicholas Sparks style manipulation than Sirk-ian conviction, the tears it tries to jerk in the final act seem unearned, even disingenuous.

Lackluster production values do nothing to shake the TV Movie vibe. Unlike Sirk, Posin does nothing remotely interesting with the camera. He’s the farthest thing from a visual stylist. About the only thing “The Face of Love” has to recommend it is Bening’s effulgence. Fortunately for Posin—and the audience—whenever she’s framed center screen, that’s more than enough. 2 ½ out of 4 stars.
Posted by Milan Paurich at 12:00 AM