The Battle of Pussy Willow Creek (now on video) 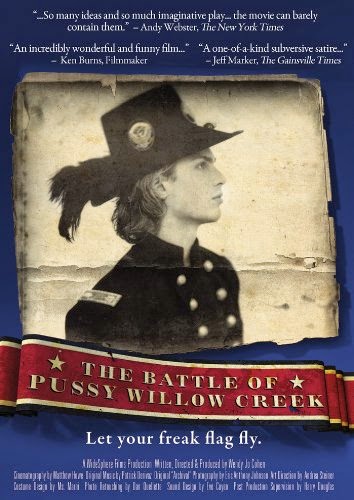 I have one less amazing fun fact with which to fascinate and enthrall potential employers on my job interviews (yeah, right). The one that Ken Burns, beloved household-name documentary filmmaker, long eschewed having his own website. For much of his career the famous man's online presence was only featured as a sub-section of the website of Florentine Films, the production company he formed at the outset with his college colleagues. Now that's humility - something in tragic short supply in the movie racket.

But no more. KenBurns.com has gone live and will take you now to a Ken Burns app and Ken Burns presences on YouTube. At least it doesn't smack of the vanity job that a lot of other celeb/showbiz sites are, but it nonetheless leaves me short one surfire conversation-starter.

Okay, how about this as a substitute: the definitive Ken Burns parody feature is now available on video.

Yes, a feature-length spoof of the Florentine Films/Ken Burns-school of historical documentary that now seems to be the PBS standard, with its reliance on old historical photos, recitation of vintage letters, and talking-head interviews. What an utterly brilliant notion, and why didn't somebody think of doing it while Leslie Nielsen was still alive?


Even more shockingly, THE BATTLE OF PUSSY WILLOW CREEK, as it's called, by New York filmmaker Wendi Jo Cohen, was completed in 2009, evidently, and has only now become available to the masses on DVD. Yes, DATE MOVIE and DANCE FLICK got actual studio releases, while this ace satire sat it out.

Needless to say, PUSSY WILLOW CREEK takes major cues from Burns' hit The Civil War. Filmmaker Cohen uses an onscreen pseudonym `Grace Burns' to rip the lid off a long-suppressed (by personal orders of Lincoln, the Confederacy and even the British Empire) story of a decisive battle - how the Union's all-misfit Rhode Island 13th Brigade saved Washington DC from a southern invasion. Despite their having no artillery and a drummer boy with but one arm (and not really a boy, either).

The economical presentation is mostly mock-ups of vintage illustrations, old letters, sham photographs, spurious 19th-century popular music (all composed by `Collins Stephens,' nyuck nyuck nyuck), interspersed with motley experts of modern times. They explain how fey Jonathan Lang, a cross-dressing androgyne (and, eventual opium addict) fighting for the Union cause, went to war as part of what amounted to an obsessive lover's quarrel with his southern boyfriend from the military academy.

Ultimately to head the Rhode Island 13th, Lang was joined in his mission by an elderly Chinese immigrant launderer - `General Li' - fond of basing military strategy on I Ching castings; a vengeful teenage prostitute with a voracious sexual appetite and lots of porn-star style pseudonyms (Candy Apple, Poison Apple, etc.); and a young black techno-nerd who was raised by his white adoptive mother in complete ignorance of slavery and racism and what his own skin color meant. This last is sort of a Grand Theft David Chappelle, but I'll forgive Ms. Cohen that.

THE BATTLE OF PUSSY WILLOW CREEK repeatedly comes up again and again with inventive giggles on a skimpy budget. Really, watching it I was reminded of the career-long lament of local filmmaker Robert Banks Jr. when he beholds something done creatively for little money: "Somebody HERE could have made that!" Yes indeed, but it was Ms. Cohen who pulled it off (and I am pleased to see she does have a website to get the word out. I wished Ken Burns' or Ric Burns' would link to it).
All that's missing is narration by Samuel L. Jackson spoofing narration by Keith David. Though the material should appeal both to highbrow WVIZ ideastream types (hi guys! Did you get my resume for that job? Oh, you accidentally tossed into the office shredder? Funny that keeps happening; I'll send a fresh one...) and the lowbrow comedy fans who jammed to FARCE OF THE PENGUINS.

I have no official website either. Indeed I don't, even with a shelf-full of books to my name. See, I used to tell people I was at least as big as Ken Burns. Can't use that excuse anymore. (3 1/4 out of 4 stars)