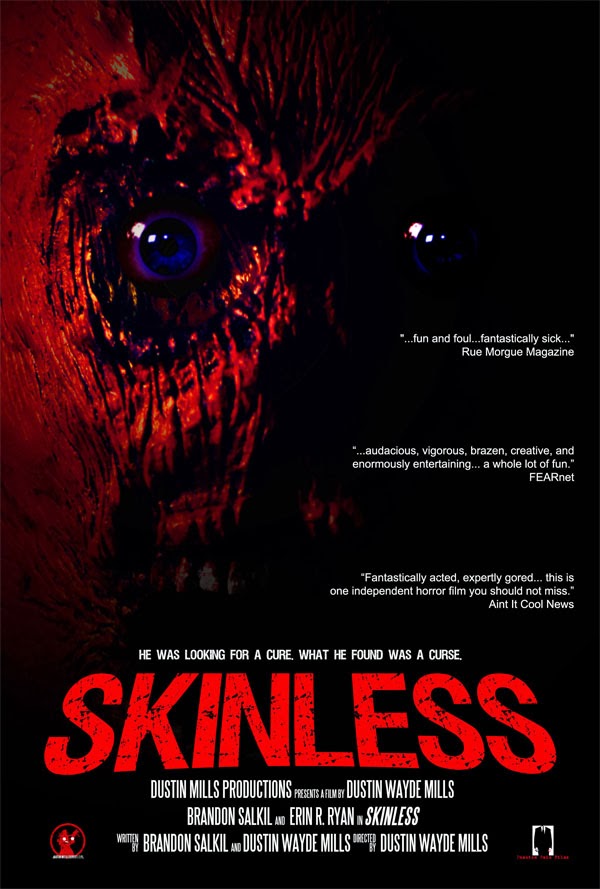 Firmly in the mad scientist/medical horror camp, SKINLESS concerns Peter Peele (the film's co-writer Brandon Salkil) and Alice Cross (Erin R. Ryan), brilliant doctors who have been working on a cure for skin cancer with little success. Their luck looks set to change when Pete learns of a South American worm that excretes an enzyme which completely destroys cancer cells. Unfortunately it destroys healthy skin cells, too, but he figures it can be genetically reprogrammed.

Getting the necessary funding to move forward proves difficult, though, as their investor Neil (Dave Parker) refuses to put up any more money until he sees some results first. Adding to Pete's urgency is the fact that he has a pretty nasty case of melanoma growing on his shoulder. Under the circumstances, Pete sees no choice but to go straight to human trials using himself as the guinea pig. This proves to be the last straw for Alice, who has up til now put up with Pete's unrequited crush on her and other eccentricities (like having sex in the basement lab with escort Olivia (Allison Fitzgerald)).

Left to his own devices, Pete injects himself with a modified version of the worm slime. At first his cancer appears to be cured, but we wouldn't have much of a horror movie if that was the end of it. Soon, Pete's skin starts dissolving away, along with his sanity, just in time for Alice and Neil to check up on him, at which point the film actually tries for (and to some degree succeeds at) a little pathos along the lines of Cronenberg's THE FLY.

SKINLESS was made by Toledo based filmmaker Dustin Mills and his associates for $2000. Normally if you wanted to see a $2000 horror movie, you'd have to go buy it from the dealer's room of a horror convention like NE Ohio's Cinema Wasteland. Unless you're one of the truly die-hard horror faithful, though, you probably wouldn't want to. These are usually the kind of movies so amateurishly made that even Netflix wouldn't touch them.

So what is there about SKINLESS that warrants being projected on the big screen over other films of its ilk? In short, quality. We're still definitely grading on a curve here, but the acting, writing, and direction are all above average for a micro budget horror film. Mills and Salkil seem to have actually written a complete script before shooting commenced, and the direction and editing are surprisingly competent. Hollywood isn't likely to come calling for any of the cast members soon, but they all appear to have learned their lines and given some thought as to how they would play their roles.

Perhaps most importantly, Mills seems to have thought through what his limitations were beforehand. Outside of a few shoddy special effects (which, given the film's campy tone, work just fine) he never reaches beyond his grasp. These things may all seem like givens if you were going to make a movie, but as anyone familiar with the twilight netherworld of homegrown horror flicks can tell you, they are not.

While it's no masterpiece, SKINLESS is an obviously heartfelt horror film that delivers the twisted, bloody goods its target audience is looking for, and at least by the standards of its miniscule budget, does so in a fairly polished and professional way. Make no mistake, if you're strictly used to Hollywood fare or even mid budget schlock like your average Roger Corman production, this may be too rough around the edges for you. But if you enjoy Troma films or the old H.G. Lewis gore movies from the sixties, it measures up quite nicely in that company. 2 ½ out of 4 stars.
Posted by Bob Ignizio at 12:00 AM