Repost: To the Wonder (March 13th and 15th at the Cleveland Cinematheque)

[TO THE WONDER screens Thursday March 13th at 6:45 pm and Saturday March 15th at 9:45 pm at the Cleveland Cinematheque. Local film writer Kurtiss Hare (also Film Programmer for The Nightlight in Akron) will introduce both shows. TO THE WONDER topped Hare’s list of the best films of 2013. Maybe I should go so he can explain what I missed.] 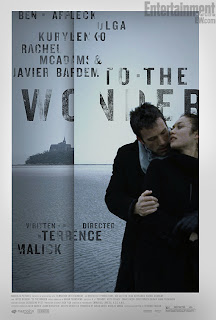 The central theme of TO THE WONDER is that love changes and fades and transforms over time. The film illustrates that well through the romantic love between Marina and Neil, the maternal love between Marina and Tatiana, and the spiritual love between Father Quintana and his God. The problem is we feel no connection with any of these characters as real human beings. Without that, why care? In turn that makes it harder to overlook the way all the relationships in the film just go from one state to another without us ever seeing the reasons why. One minute Neil and Marina are in love; the next they're smashing their furniture. The result is a pretty looking film with a potentially interesting theme that is unlikely to engage the interest of most viewers enough to get its ideas across. 2 out of 4 stars.
Posted by Bob Ignizio at 12:00 AM