Repost: The Good, The Bad, The Weird (March 28th and 29th at the Cleveland Cinematheque)

[THE GOOD, THE BAD, THE WEIRD screens Friday March 28th at 9:30 pm and Saturday March 29th at 7:00 pm at the Cleveland Cinematheque as part of Cleveland Cult Film Festival 5.] 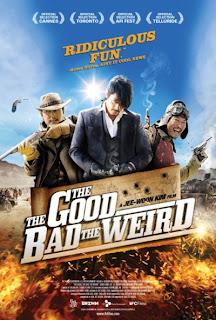 THE GOOD, THE BAD, THE WEIRD may be inspired by the spaghetti westerns of Sergio Leone, but it's not just another retro pastiche. There are definite nods to Leone films, but as anyone who has seen A TALE OF TWO SISTERS can attest, Director Ji-woon Kim has more than enough style of his own. And regardless of its influences, this Korean “Oriental Western” tells a distinctly Asian story in a decidedly modern style.


The movie begins with a masterfully executed train robbery scene that results in Yoon Tae-Goo (Kang-ho Song) getting his hands on a treasure map that everyone seems to want. Chief among Tae-Goo's pursuers are hired killer Park Chang-yi (Byung-hun Lee) and bounty hunter Park Do-won (Woo-sung Jung). Beyond that set up, the rest of the plot is best summed up by Park Do-won when he says, “Life is about chasing and being chased. There is no escape.”

Kang-ho Song's Tae-goo is easily the most memorable of the three main characters, although Byung-hun Lee makes for a more than adequate villain. It's Woo-sung-jung's bounty hunter who really lets the film down. I'm not sure if he gets that much less screen time than the other two characters, or if it just feels that way because most of what he does is so forgettable. Still, for the most part this is an enjoyable film. There's not much to it, but it is a visually stunning, action-packed bit of fluff.

There's very little in the way CGI or special effects in general to be found in THE GOOD, THE BAD, THE WEIRD. It's a reminder of just how exciting an action film can be when we're aware that we're watching real people doing dangerous things rather than computerized doppelgangers. Not so thrilling is the fact that some of the film's equine performers were subjected to the kind of inhumane treatment (primarily tripping) that hasn't been allowed in American films for decades.

Various online news sources report that these scenes were cut for western distribution, but they sure looked like they were present to my eyes. Either way, it doesn't change the fact that the cruelty took place. Whether that's reason enough to skip the film entirely I leave for you to decide. Personally I try to balance my distaste with the fact that this is a film made in another country with a different cultural viewpoint, but it can't help but take some of the fun out of the experience. 3 out of 4 stars.
Posted by Bob Ignizio at 12:00 AM