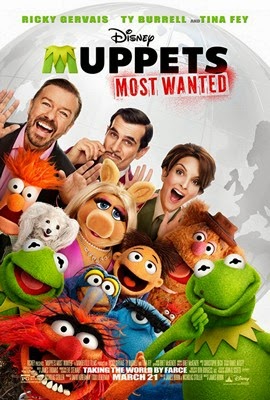 One really couldn’t have wanted for a better Muppets reboot than 2011’s THE MUPPETS.  Over a decade had passed since Kermit the Frog, Miss Piggy, and the rest of the gang headlined a major motion picture, so—some thirty-five years after the debut of The Muppet Show (1976) on television and release of THE MUPPET MOVIE (1979) in theatres—it was questionable whether Jim Henson’s felt-skinned friends could still fire our imaginations and tickle our funny bones.

Writer / star Jason Segel (I LOVE YOU, MAN) cleverly addressed the Muppets’ relative post-millennial obscurity for their new Disney keepers by setting his human character’s half-pint brother—Walter the Whistler—after Kermit and company in a bid to save their historic studio from a greedy oil tycoon.  The resulting romp packed ample pep for young audiences but was also nostalgic (and smart) enough for parents who grew up watching the show and early films.  The musical numbers were catchy, the gags funny, and the whole “let’s get the gang together again” story sufficiently heartwarming for all.
So how could Disney top Segel’s reunion picture?

Director James Bobin returns with MUPPETS MOST WANTED, a campy catch-up flick that tickles in all the right spots whilst nudging the overall Muppets saga that much further into the future.  Voiced predominantly by Steve Whitmire, Eric Jacobson, and Dave Goelz instead of creators Jim Henson (deceased) and Frank Oz (retired), these may not be our Muppets—but they look and sound damn near the same.

The premise is recycled:  Bobin and his writers rely on the old “mistaken identity / evil twins” trope, threading it through a fairly standard heist storyline.  Muppet filmmakers already used the “amnesia” gimmick in THE MUPPETS TAKE MANHATTAN (1984) and had Kermit unravel a jewel-snatching in THE GREAT MUPPET CAPER (1982), so it’s not as if the frog hasn’t already made a little magic from tired TV sitcom formulae.  Remarkably, Bobin’s hodgepodge hits home again.
MOST WANTED picks up right where THE MUPPETS left off.  Kermit, Piggy, and the ensemble are still gathered in the street outside their theatre after that film’s climactic telethon.  Villain Tex Richman is gone, as are Gary (Segel) and Mary (Adams)—who’ve presumably run off to tie the knot.  Unsure how to capitalize on their victory, the Muppets break the fourth wall by launching into opening musical number “They’ve Ordered a Sequel,” during which the characters toss around ideas—for both their theatre troupe and this latest cinema installment.  It’s a perfect way to reconnect with everyone in the bunch, even if one of them admits during his verse that, “sequels are never quite as good.”

Confused by the array of goofy concepts presented, Kermit is easily talked into staging a world tour by Machiavellian agent Dominic Badguy (Ricky Gervais).  The Muppets are ecstatic—but they don’t know their new rep has booked major shows in big cities like Paris, Berlin, Madrid, and Dublin just so he can knock over nearby museums for artifacts once owned by the legendary Captain Thomas Blood.  Whoever holds all the pieces can disable the security system at London Tower and make off with England’s royal crown.

But Dominic’s not acting alone.  In fact, he’s merely the “No. 2” heavy to international terrorist / Kermit clone Constantine, who handily escapes from a Siberian prison and replaces the main Muppet in order to guarantee a trouble-free tour—and ripe robberies.  Only scent-savvy Animal spots the duplicity when Kermit is frog-napped and transported to the Gulag to supplant AWOL Constantine, but no pays mind to The Electric Mayhem’s mangy drummer.

“You can’t do this to me!” Kermit argues with authorities.  “I’m an amphibian American!”

Back in civilization, no-nonsense CIA operative Sam the Eagle and daft French INTERPOL agent Jean-Pierre Napoleon (Ty Burrell) form an odd couple detective duo.  Sam’s determined to nab the thieves behind the heists, but Jean-Pierre takes a more relaxed approach—and thinks nothing of setting aside warm clues for a hot lunch.  A hilarious “Interrogation Song” ensues after brooding, thick-browed Sam notices that the robberies coincide with the times and locations of Muppets shows.  But Sam and Jean-Pierre conclude that the motley crew is “incapable of being culpable” following a round of rigorous, rhymed questioning that spotlights each Muppet’s eccentricity.

Scooter, Fozzie, Piggy and friends hear a change in their leader’s voice, but Constantine keeps them in check by saying he’s got a cold.  Dominic advises the “bad frog” to play nice and brush up on Kermit’s speech and mannerisms to help maintain the illusion.  Constantine thinks he’s got everything under control but reluctantly acquiesces, and we catch a snippet of “Rainbow Connection” during his review (and mockery) of vintage Muppet Show episodes on tape.  The crook also does an about-face with Ms. Piggy, throwing his charm into overdrive after initially brushing off the doting diva sow.  Constantine’s efforts to “keep the pig happy” result in another sidesplitting song (the disco-themed “I’ll Get You Want You Want”), but the false frog’s zeal soon puts Piggy on high alert:  Her “Kermie” was always reticent about their romance.

On set, Gonzo the Great’s latest stunt involves an “indoor running of the bulls.”  Animal indulges in a ten-minute drum solo during a protracted Mayhem jam.  Pyromaniac Crazy Harry takes his bomb fetish to new levels.  Pepe the King Prawn reverts to his old fish-throwing habits.  Swedish Chef concocts succulent—but unintelligibly pronounced—new dishes.  In Madrid, the show theme is rendered en Espanol and Ms. Piggy does the Macarena with flamingoes.  Dr. Benson Honeydew tests a “magnetic bomb vest” on hapless assistant Beaker.  And all the Muppet cacophony provides perfect cover for Constantine and Dominic as they blast, dig, and drill through cinderblock walls and steel vaults.
No self-respecting “mistaken identity” spoof works without a climactic confrontation between the doppelgangers, and capers lack tension without deadlines (or detonations).  Accordingly, The Muppets strategize to break Kermit out of prison and turn tables on Constantine—who holds London Tower hostage with a customized explosive—and our hero has to hustle to keep a wedding date he thought he never wanted.

It’s still not easy being green.

Commendably, Bobin gives longstanding peripheral Muppets more camera time on this outing:  Beauregard the Janitor becomes engineer on The Muppets’ traveling train; Electric Mayhem bassist Sgt. Floyd Pepper has lots of groovy dialogue; fang-faced, 9-foot tall brown ogre Sweetums gets a dance number; former Tex Richman cronies Bobo the Bear and Uncle Deadly the Dragon share a moment; even those cutesy-pie infants in Bobby Benson’s Baby Band show up in the third act.  Heckler curmudgeons Statler and Waldorf are still alive and in rare form:  When they spot a German advertisement for “Die Muppets” outside a Berlin concert hall, they take it for a suggestion box.

Gervais makes an effective (tap-dancing) crook, Burrell does an admirable “Inspector Clouseau” impersonation, and Fey—while no Amy Adams—rocks a Russian military uniform and gets a song of her own, too.  It’s all very lighthearted, fun, and moves more briskly than its 113-minute running time would suggest.  2 ½ out of 3 stars