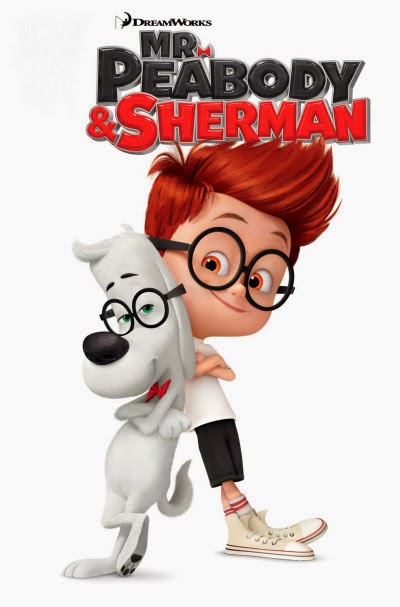 Based on the 1960s cartoon, Mr. Peabody (voiced by Ty Burrell) is an extraordinary dog. He graduated with a degree from Harvard, invented numerous innovative inventions (including planking and Zumba) and even adopted a son, named Sherman (Max Charles).

Sherman, who is starting his first day of school, has been given expedited education from his genius dog of a father. Most of this education comes from travelling back in time in one of Peabody's inventions, The Way Back.

On his first day of school he is teased by his classmates, especially a pretty little girl named Penny (Ariel Winter). Penny is jealous of Sherman's knowledge and makes fun of the boy, calling him a dog, just like his father. Sherman's response, ironically, is to bite Penny.

This incident leads to what becomes an overkill of plot lines. Mr. Peabody must appease Penny's angry parents, drive off a child services agent bent on taking Sherman away from him, and come to terms with the love he has for his son.

While all of this is happening, even another plot line is added. Sherman disobeys Peabody and uses the time machine to try and impress Penny. To solve this problem, Mr. Peabody jumps back into time to save them and adventure ensues. MR. PEABODY & SHERMAN is simply taking on too much for it's just over 90-minute run time.

The history lessons add a funny twist but lack an educational value as Leonardo DaVinci has a phony Italian accent and the Trojans seem to be rather dim-witted. Some of the messages also become a bit off-color. Sherman seems to be falling in puppy-love (again, ironic) with a girl who was nothing but cruel to him. In addition, Mr. Peabody is struggling to admit that he loves his son (he replies to his sons love with "I have a deep regard for you as well").

While the intentions for a fun-loving family film are there, the cartoon does not pull through and wraps up its numerous plot lines quickly and sloppily.

The real treat of the movie is Ty Burrell’s take on Mr. Peabody. Burrell is quick and witty as he generates most, if not all of the laughs in the film.

The advantage of Mr. Peabody & Sherman is that most children will not recognize the flaws and most parents will be content reliving their past and catching some pun-filled humor. 2 out of 4 stars.
Posted by Grace Snyder at 12:01 AM