Journey to the West: Conquering the Demons (opens in Cleveland March 7th exclusively at the Capitol Theatre)

[JOURNEY TO THE WEST: CONQUERING THE DEMONS opens in Cleveland on Friday March 7th exclusively at the Capitol Theatre.] 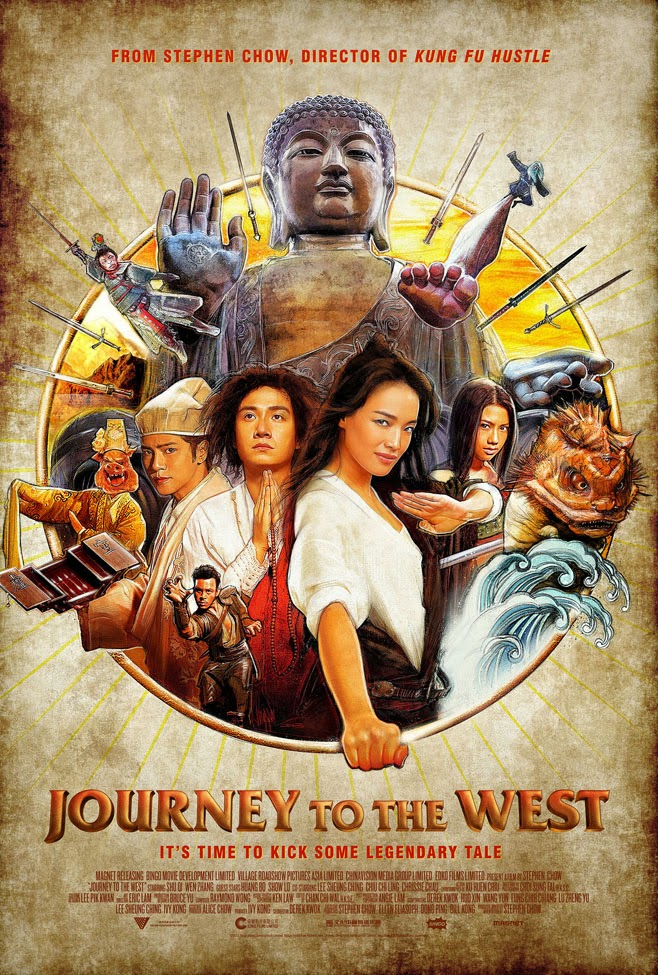 Loosely based on a 16th century Chinese novel considered one of the four great novels of Chinese classical literature, Stephen Chow and Derek Kok's JOURNEY TO THE WEST: CONQUERING THE DEMONS feels anything but literary. Rather it is, like most of Chow's work as a director (SHAOLIN SOCCER, KUNG FU HUSTLE, etc.), a lighthearted action/adventure romp full of improbable situations and slapstick humor.

As the film starts, a fishing village is being terrorized by a fish demon, a sequence which alludes to JAWS when a dubious demon hunter kills a giant stingray, only to be told by “unshaved monk” Tang Sanzang (Wen Zhang) that he got the wrong critter. Indeed this turns out to be the case when the real fish demon returns to gobble up a few villagers. Sanzang tries to subdue the monster by reading it nursery rhymes, which he believes will bring out the good in the creature. When this fails, it's up to yet another demon hunter, the striking Miss Duan (Shu Qi) to save the day. From here on, the film is a series of vignettes in which Sanzang and Duan track down and do battle with other dastardly entities, Sanzang coping with both his own self doubt and the unwanted advances of Miss Duan.

In many ways JOURNEY TO THE WEST recalls the sort of fantasy films I grew up watching as a kid that adapted various Greek myths and the adventures of Sinbad, and which featured stop motion monsters created by special effects wizard Ray Harryhausen. Here the legends are of Chinese origin and the monsters created on a computer, but the sense of fun and wonder is largely the same. But there are also significant differences in tone, with JOURNEY TO THE WEST being more broadly comedic as well as a bit more violent and, occasionally, ribald. I wouldn't go so far as to say it's family unfriendly, but it definitely earns its PG-13 rating. As long as you and your kids aren't bothered by a little sexual innuendo and some light gore (say on a par with an INDIANA JONES movie), and provided you're okay with subtitles, this JOURNEY should prove an enjoyable one. 3 out of 4 stars.
Posted by Bob Ignizio at 12:01 AM