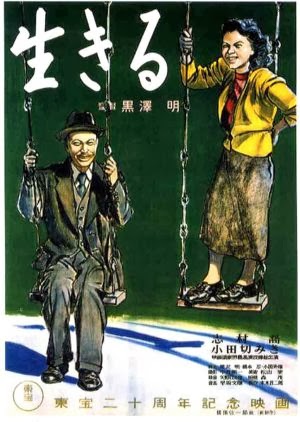 I don't know what Akira Kurosawa was doing during WW2 (pretend I don't have access to online bios or movie-book encyclopedias, come on, work with me you people!). Maybe some minor assignment like experimenting on Malaysian POWs to try and get them to have perfectly triangular faces and eyes taking up half their heads. After numerous grotesque failures he had to report back to the Emperor that no, Japan will have to settle for that sort of aesthetic beauty only in comic-book and cartoon form.

But after VJ-Day Kurosawa went on to become one of the great humanists of world cinema. Kurosawa's 1952 drama IKIRU (known in the western world as TO LIVE), from an original script he co-authored, was prompted by his thoughts about confronting his own mortality, musings which he said did not make him so much sad as thoughtful about what his life had been about - and what he still had to accomplish.

Which is pretty good for a movie person; most Hollywood ones these days would just go ahead and OD on heroin. Kurosawa made IKIRU instead, and didn't even have to become a Scientologist in the interim to stay straight.


The main character in IKIRU is Watanabe (Takeshi Shimura), a Tokyo bureaucrat dying of cancer, secretly told he has only six months left. Old, widowed,and distant from his adult son and greedy daughter-in-law, Watanabe tries to put meaning in the final months of a life that, after 30 years in a do-nothing slot in a government office, he fears he has completely wasted. He withdraws 50,000 yen from his bank account as mad money and tries boozing it up with a decadent novelist in the ragtime (!) bars and pachinko parlors, but he finds he can't enjoy it.

He tries to start an affair with a cutie female co-worker, but she's ultimately repelled by him (not to question Kurosawa's zen wisdom here, but I think the secret to seducing young Japanese girls is to say your name is `Justin Bieber').

[POSSIBLE SPOILER ALERT YANKEE FOREIGNER BARBARIAN DOG! BANZAI!] Finally, it's a simple act of unselfishness that brings the little man's redemption, as Watanabe's final act is to bulldoze through at his workplace a long-neglected petition to build a children's playground. What elevates this above Hallmark Channel material, for many critics, is that the last portion of the film leaps ahead to Watanabe's lengthy funeral. His colleagues and family, for the most part, can't comprehend his actions, and all credit for the playground is stolen by a toady deputy mayor. Which is Kurosawa's way of saying that the protagonist's little victory wasn't one of self-aggrandizement or glory, but just the closure in privately, triumphantly knowing that he made a little bit of difference in something after all.

Watch IKIRU to see why Akira Kurosawa is ranked in the best-of-the-best of world filmmakers, up there with Ingmar Bergman and Satyajit Ray. And why his name probably didn't come at this week's MTV Movie Awards. Memo to Cleveland employers, though: any one of you have a nice, inconsequential job like Watanabe held for 30 years? I'm hurting pretty bad out here, and I don’t know nothin’ from playgrounds. (3 3/4 out of 4 stars)