Enemy (showing in Cleveland exclusively at the Cedar Lee Theatre)

[ENEMY is now showing in Cleveland exclusively at the Cedar Lee Theatre.] 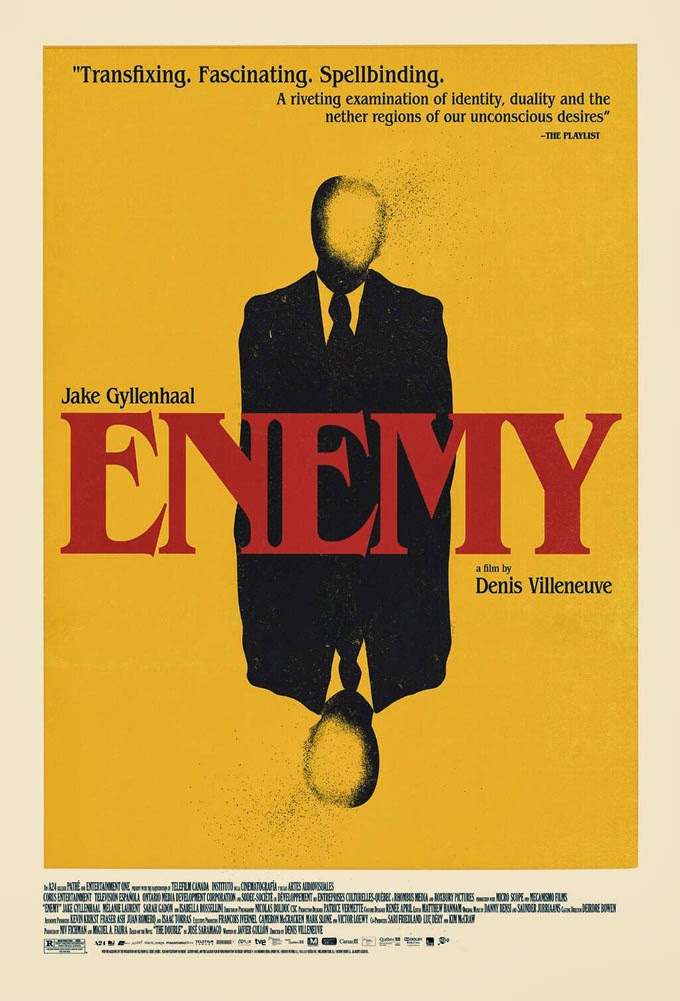 Last fall director Denis Villeneuve presented audiences with PRISONERS, a psychological thriller about missing children that divided its audience.  Now Villeneuve gives us ENEMY, a film based on the novel THE DOUBLE by Nobel Prize winner Jose Saramego, and if there wasn’t a consensus on PRISONERS, this film will likely create an even larger divide among moviegoers. Just as enigmatic as PRISONER and twice as cerebral, both films keep you guessing, but in the case of ENEMY the answers don’t come easy. In fact you could argue that they don’t come at all.

The movie begins with an epigraph taken from Saramego’s novel, “Chaos is order yet undeciphered.” This will serve as our mission statement over the next ninety minutes. Take it to heart and prepare as best you can. To watch this film literally is a mistake. You’ve been warned: deciphering must take place to work out the impending chaos.

ENEMY stars Jake Gyllenhaal (ZODIAC, DONNIE DARKO), who also appeared in PRISONERS. However, unlike PRISONERS, which also starred Hugh Jackman, Paul Dano, Viola Davis, Melissa Leo and Terrence Howard, ENEMY lacks that sort of star power. Gyllenhaal plays Adam Bell, a sluggish, reluctant history professor. Adam is a man of routine. He lectures on totalitarian government and the tradition of history repeating itself. Despite powerful historical messages, which you can try to read into however you’d like, his classes seem uninspired and his home life consists of a near empty apartment and his girlfriend Mary, played by Melanie Laurent (INGLOURIOUS BASTERDS, NOW YOU SEE ME). Like the rest of Adam’s life, it’s hard to tell if he is passionate about Mary of if she is simply part of his routine.

Adam's curiosity is piqued when – after renting a light-hearted movie recommended by his colleague – Adam spots an extra in the film who looks exactly like himself: his indisputable doppelganger.  He sets out to find the lookalike.

The man is aspiring actor Anthony Claire (also played by Gyllenhaal). In contrast to Adam, Anthony is a self-assured go-getter (he drives a motorcycle and dresses to impress). But beyond their emotional makeup and significant other, everything about Adam and Anthony is the same – features, voice and scars. What might appear to be a simple doppelganger movie is anything but.

Adam sets out to meet Anthony and the repercussions will turn Adam’s repetitive life upside down. Not only does Anthony share Adam’s interest in finding out the truth, but so does his pregnant wife, Helen (Sarah Gordon). The mutual pursuit is tense and messy.

At times ENEMY plays out like a twisted David Lynch tale, other times it has the dread of a Stanley Kubrick film (Danny Bensi & Saunder Jurriaans' score doesn’t hurt). The setting – Toronto – is a dreary landscape of bleak and muted colors. The tone is heavy and never lets up.

From the moment the film begins with a stripper and a soon to be stepped on tarantula (and few films have made me question the meaning of an insect like this one), you can be assured going forward that nothing about ENEMY will be simple. Strangely, it feels okay to be confused. The film wouldn’t work if you weren’t guessing and theorizing. That is to say, Villeneuve and screenwriter Javier Gullon expect you to do some thinking and to pay attention.

Villeneuve and Gullon present a cold and distant film. They do a masterful job of getting you close enough to the central characters to care, but not so familiar that the pieces fit. It will either intrigue you or won’t. You may eagerly try to track down clues and symbolism or you might find your head in your hand waiting for the end to come. All things considered, it worked for me. In fact, I haven’t been able to shake the film off since I saw it.

ENEMY doesn’t tell what direction you or the film is headed, though Villeneuve has openly stated that the movie can be deciphered. When it comes to an end, with a final shot that will make you squirm in your seat, you’re ultimately left with the deiding what the films message is, what the chaos means. Not everyone will agree and that’s half the fun. 3 stars out 4.
Posted by Joseph Anthony at 12:00 AM