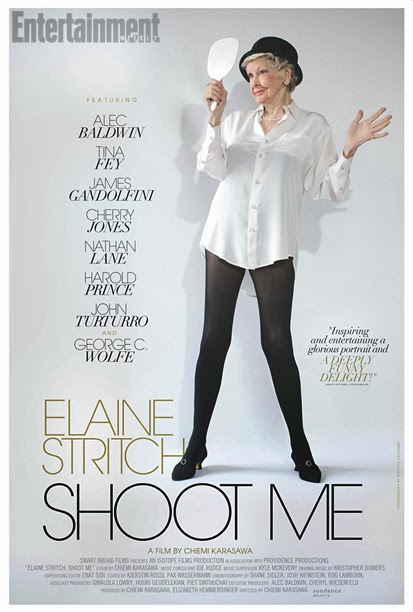 If I live to be 89, I hope to be like Elaine Stritch, the brash, one-of-a-kind Broadway actress profiled in Chiemi Karasawa's fine documentary ELAINE STRITCH: SHOOT ME. Who am I kidding? I have only a fraction of her energy now.


Eighty-seven at the time the film was made, Stritch is seen rehearsing her latest cabaret show at New York's Carlyle Hotel, where she also lived at the time. The show, "Elaine Stritch Singin' Sondheim…One Song at a Time,” has Stritch, in her distinctively rough, inimitable voice, revisiting the songbook of the composer who created one of her most celebrated roles, Joanne in “Company.” Beset by insecurities, the effects of diabetes and the occasional memory lapse — granted, Sondheim's lyrics are a challenge for a singer of any age — Stritch pushes on, with the help of her devoted young accompanist, Rob Bowman.

While Stritch's name may not be very familiar to non-theatergoers, she's also known for occasional standout film roles (e.g. Woody Allen's SEPTEMBER) and a recurring role as Jack's mom on 30 Rock. As in her Tony-winning one-woman show, “Elaine Stritch at Liberty,” the erstwhile convent girl reflected on her life, her career and her loves, who included Marlon Brando, Gig Young, Ben Gazarra and Rock Hudson. (She even dated a young Jack Kennedy, who dropped her when he discovered she wouldn't put out.) She is elegiac about her husband, actor John Bay, scion of the Bay English Muffin family and the great love of her life. “He made me laugh and feel everything. I was happy, happy.”

After Bay's death from brain cancer in 1982, Stritch had to find a way to carry on. Losing her husband sent Stritch into a battle with alcoholism, which she still wages by attending AA meetings (“They keep my mind sharp.”). She toys with the idea of having “one drink a day,” but drinking seems to wreak havoc on her health. During the course of the film, she endures two hospitalizations, which seem dire, but after each one she comes roaring back.

Stritch is a singular talent with a remarkable personality. She's known for her long, slim showgirl legs and her brutally honest tongue. “Your hair looks good for a change,” she barks at a longtime friend while visiting her alma mater, the Stella Adler School of Acting, which is dedicating a studio to her. In another scene, she rebukes the film's patient director for not filming her properly. But her salty personality is part of what friends and fans cherish. James Gandolfini, an admirer who became a close friend, praises Stritch's “bullshit meter” and says knowing her reminded him that acting, which can often seem like a silly thing to do, is “a beautiful tradition.” (How much do we miss him, by the way?) Nathan Lane says, “She's very, very truthful.” A younger woman she befriended at AA describes how Stritch commanded her to become, henceforth, her driver, and also to clean her car and bring Elaine her favorite decaf Coke. The woman, now a dear friend, couldn't resist Stritch. “She's so alluring. She is a Molotov cocktail of madness, sanity and genius.”

We get a sense of Stritch's particular magic when she takes the stage at the Café Carlyle. Honest, self-aware and utterly charismatic, she sings “I Feel Pretty” from West Side Story and “Rose's Turn” from "Gypsy" and absolutely owns them. She is, in the words of her director, “a brilliant storyteller who reaches for the emotional truth.” The audience responds with torrents of love.

“If I forget my lyrics — fuck it! I'm happy,” Stritch says. She is realistic about her age and the fact that time is limited. Still, she has plans for the future, including buying a home in her Michigan hometown and possibly retiring. (Later it was reported that Stritch found life in Birmingham, Michigan, where she bought a swanky condo, deeply boring.) It is her work that sustains her. “I feel better when I work. I'm protected in the theater, with prosceniums and escape.” She quotes Bette Davis' statement that old age "isn't for sissies,” and adds,“I like the courage of age. Why not enjoy it? There's not a damn thing you can do about it.”  4 out of 4 stars.

Email me at pzoslov@gmail.com
Posted by Pamela Zoslov at 12:00 AM