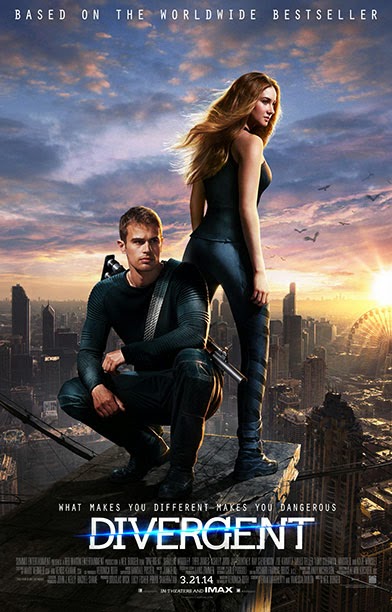 DIVERGENT: it’s the latest in an exhaustive line of YA lit adaptations and - if you listen to the panicked baying of media wolf-criers – the film upon which the immediate future of tween cinema hangs. Directed by Neil Burger (LIMITLESS) from the first book in a trilogy by Veronica Roth, it’s another action-lite coming-of-age sci-fi flick, this time set in a post-post-apocalyptic Chicago, where a new social order has risen.

Check it out: Everyone belongs to one of five factions, each of which is defined by a character trait and responsible for controlling one aspect of society. The brainy Erudite handle science and tech; the fearless, adenoidal Dauntless enforce the laws; the selfless, Soviet-gray Abnegation helm the government; the forthright-to-a-fault Candor oversee the courts; and Amity, peace-preaching extras from HAIR, grow the food.

Then there’s Divergent – a feared, unspoken sixth class that doesn’t fall into any category and is, therefore, a threat to the starkly categorized social order. At the start of the film, sixteen-year-old Tris (THE DESCENDENTS’ Shailene Woodley) enters the standard serum-induced hallucination test (you know the one...) to identify her place in society, only to discover she belongs to this forbidden group. Electing to keep her prognosis a secret and join Dauntless instead, she soon uncovers a nefarious conspiracy that only a Divergent can overcome.

At nearly 2 ½ hours, it’s a credit to both decent casting and Burger’s dynamic (at times even beautiful) direction that DIVERGENT is as watchable as it is. The film’s biggest shortcoming is its inability (or perhaps unwillingness) to fully unmoor itself from its navel-gazing, YA trappings and become the full-fledged science fiction actioner of which it’s capable.


Though we find out early on that Tris is Divergent – a fact that will certainly undermine her attempt to fit in with any single faction – we’re still subjected to almost an hour spent within the lower ranks of Dauntless, as she trades jabs, jokes and smooches with others hoping to join the beefiest of the factions.

During this time, we meet intense dreamboat Four (UNDERWORLD: APOCALYPSE’s Theo James), mega jerkface Peter (THE SPECTACULAR NOW’s Miles Teller), and obvious big bad Jeanine (Kate Winslet), but the stakes never seem any higher than Tris gaining acceptance into Dauntless’ pec-popping ranks. It’s only in the last 45 minutes that the true scope – and stakes - of the story coalesce… and when they do, it’s kind of awesome, complete with a couple decently choreographed fights, a slew of gun battles and a genocidal mind control conspiracy.

Despite the fairly goofy five-faction premise, somewhere in DIVERGENT, there’s a decent mid-‘90s post-THE MATRIX sci-fi movie – you just have to sit through some overwrought teenage self-actualization to get there. And even that’s not quite as bad as it sounds. I mean, there’s some knife throwing and stuff.

I’ve already commended Burger for his direction, which employs enough movement and camera set-ups to keep the film chugging along without ever becoming distracting or frenetic. I can’t close out, though, without giving props to the set designers who, despite occasionally falling victim to sterile, overly clean, sorta network drama aesthetic, did a neat-o job realizing the varying attire and living spaces of the factions, from Abnegation’s chimney-ash Brutalist hovels to the depths of Dauntless’ jockdom - Nickelodeon Guts’ Aggro Crag as furnished by American Gladiator.

I’m a terrible judge of acting, so I’ll just say that Woodley gets a thumbs up for portraying Tris’ gradually increasing self-confidence. And Kate Winslet has set the bar way too high for herself, so while it seems unfair to say that she’s just not that compelling here, I will say that I prefer her with bushier eyebrows (again, a terrible, terrible judge).

Ultimately, like adult Romance, Young Adult is more meta-genre than genre, with offerings leveraging every possible literary mileu – historical fiction, mystery, fantasy, and, in the case of DIVERGENT, science fiction – as backdrops upon which to explore the same familiar adolescent quandaries: first love, the search for identity, questioning of authority, etc.

When done well, you get something like THE HUNGER GAMES (or its superior sequel CATCHING FIRE), which uses a compelling genre narrative to keep its protagonist’s self-involved emotional issues in check, without ever diminishing their importance to the character’s journey. Do it poorly, and out gushes TWILIGHT.

DIVERGENT hews closer to GAMES’ intrepid will to build a dire future and arrange it into prison bars around a steely young woman than it does to TWILIGHT’s empty, maudlin bluster. And while it’s neither the sappiest romance nor most thrilling adventure, it’s a convincing argument for the continued mining of YA material, overwrought sentiment, ludicrous premises, and all. (2 ½ out of 4 Stars)

P.S. Can’t not point out that the film’s other most obvious flaw is that, after introducing five distinct factions, we only ever spend time with Dauntless, Erudite and Abnegation. Coulda been much more compelling if, instead of following a single young Divergent, we followed five – one in each of the factions – and watched as the conspiracy slowly spread ripples across all of society, ultimately bringing our young characters together to fight with or against each other … but, then, I never read the books, so who knows what the hypothetical sequels hold.