[BETTIE PAGE REVEALS ALL screens Saturday March 8th at 9:30 pm and Sunday March 9th at 6:30 pm at the Cleveland Cinematheque.] 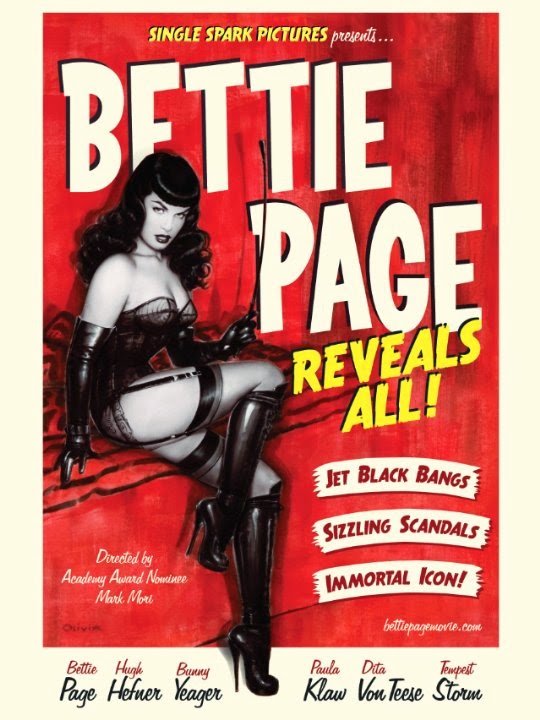 For most of the nineteen fifties, a woman from Tennessee named Bettie Page posed for a series of photographs that would make her an iconic sex symbol. The photos ranged from amateur shot cheesecake photos for New York city “camera clubs” to bondage photos for pin up photographer Irving Klaw. She also posed several times for Bunny Yeager, herself a former pin-up model turned photographer, which resulted in Bettie becoming the first holiday Playmate in the January 1955 issue of Playboy Magazine. In all of these photos, there was something special about Bettie that went beyond just her undeniable good looks – a sense of joy, a knack for knowing just the right post, and a complete and utter lack of shame. And then, she seemed to simply vanish from the face of the earth.

Over the years, the cult of Bettie continued to grow. Her photos inspired artists like Dave Stevens, who used her as the model for his main character's girlfriend in the comic book The Rocketeer. Fan clubs sprouted up like The Bettie Scouts of America, and a fanzine called The Bettie Pages reproduced her old photos and published articles about her. She influenced major artists like Olivia and Robert Blue, and even had an impact on the worlds of fashion and music. It was only a matter of time before someone would learn her fate, but could the story of what happened to Bettie Page after she left the spotlight possibly live up to expectations? Indeed, it could.

BETTIE PAGE REVEALS ALL truly lives up to its name, allowing its now deceased subject to narrate her own story through recorded interviews in which she comes across just as forthcoming and unashamed as she does in her famous photographs. Her early life was not an easy one, and yet she managed to accomplish a great deal, coming within a hair's breadth of being her class valedictorian and earning a scholarship. Who knows what course her life might have taken if things had been just a little different?

Bettie doesn't shy away from discussing some of the darker periods in her later life, either. She admits to bad judgment when it comes to men, and discusses times when she was victimized while never accepting the identity of victim for herself. And while some might assume these terrible incidents were a result of Bettie's nude and fetish modeling, it seems that if anything, it was in those circles Bettie was treated best.

There has, of course, already been a Hollywood biopic made about Bettie: THE NOTORIOUS BETTIE PAGE. It's a reasonably entertaining film that gives a more or less accurate account of Bettie's modeling career (although Ms. Page was less than thrilled with it), but it doesn't go into nearly the kind of detail one gets here. Certainly this film is aimed primarily at Bettie's many fans, and even if the material is familiar to them, the chance to hear Bettie tell her story in her own words makes it worth revisiting. For those who aren't already familiar with Ms. Page, the film does an excellent job not just of letting her tell her story, but of putting it in a cultural and historical context through interviews with those who knew and worked with her as well as those she has influenced, and through them makes a case that there was some importance to what this smart, vivacious girl from Tennessee did.

Oh, and if you're hoping to get a glimpse of Bettie in her later years, forget about it.  As the closing quote from her says, "I would like people to remember me how I was in the photos." 3 ½ out of 4 stars.
Posted by Bob Ignizio at 12:17 AM