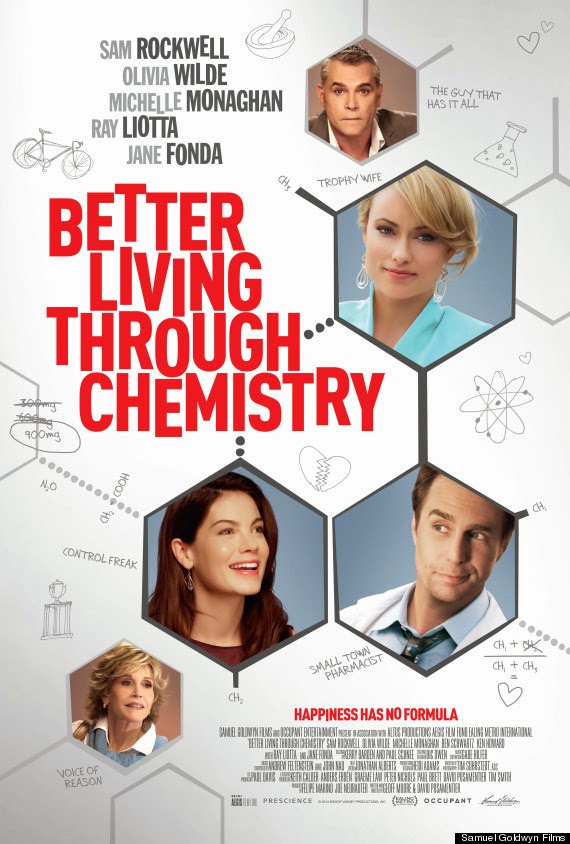 Doug Varney (Sam Rockwell) is your classic nebbish protagonist. His cycling nut wife Kara (Michelle Monaghan) looks at him with contempt, his overweight son Ethan (Harrison Holzer) paints the windows in his room black and is in trouble at school for smearing poop on lockers, and even though his father-in-law (Ken Howard) is passing the family pharmacy business on to him, he won't let Doug change the name. At least Doug likes his job, even if he winds up staying late to finish deliveries because his employee decides to leave early for a Widespread Panic concert at the last minute.

Lucky for Doug, as it turns out.

One of the customers on his delivery route is attractive but unsatisfied trophy wife Elizabeth Roberts (Olivia Wilde). Even through a haze of drugs and alcohol, Elizabeth immediately recognizes Doug as an “authentically nice guy” and kindred spirit, which evidently is a real turn-on for her. Doug refuses her advances at first, but when they meet a second time they wind up doing the deed in Elizabeth's car. As narrator Jane Fonda classily opines, “Adultery? Please. Save the preaching for church. You'd change your tune, too, after being balls deep in a woman like Elizabeth.”

As often happens in movies like this, one good lay gives Doug the necessary confidence to take charge of his life and stand up for himself, and what few inhibitions he still has remaining are soon wiped away after Elizabeth convinces Doug to partake of his own stash. Doug's life seems to improve dramatically under this regimen of sex and drugs, but all that changes once the DEA shows up to do an inventory at the pharmacy right around the same time he decides to help Elizabeth kill her husband.

There are a lot of funny moments along the way, but the plot gets so ridiculous that it's hard to stay invested. It also doesn't help that the movie feels painfully like the work of first time directors. Working from their own screenplay, writers/directors Geoff Moore and David Posamentier trot out every visual storytelling trick they can think of (whether it works or not) while simultaneously violating the “show, don't tell” rule of filmmaking with Fonda's mostly superfluous narration. The excellent cast almost manage to yank it back from the precipice, but despite their efforts BETTER LIVING THROUGH CHEMISTRY can't stop itself from careening over the edge. 2 out of 4 stars.