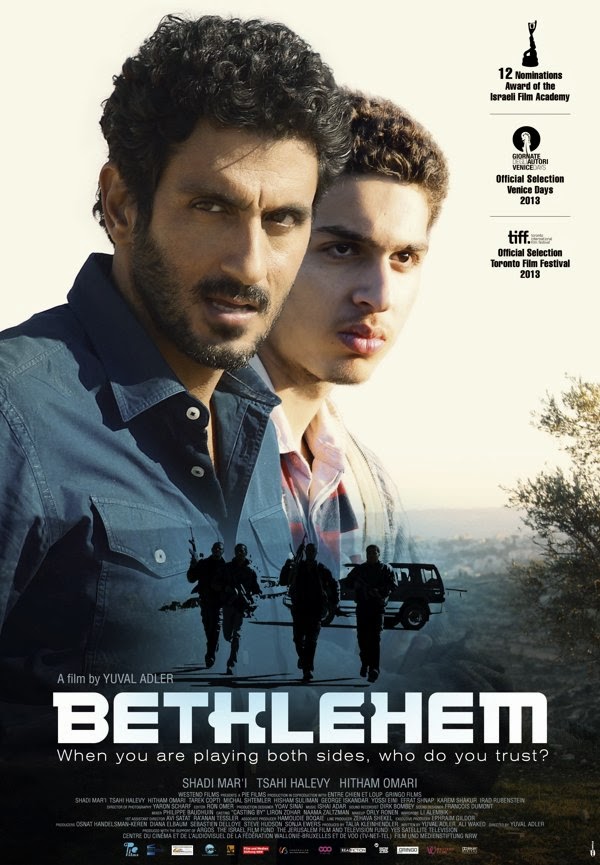 Every once in a while, two movies arrive at almost the same time that seem to tell very similar stories. In Hollywood, this is usually by design, with smaller projects looking to ride on the coattails of big event movies. The classic example is when James Cameron's THE ABYSS begat DEEP STAR SIX and LEVIATHAN, and we saw it again this year with the modestly budgeted THE LEGEND OF HERCULES coming out months ahead of this year's Dwayne Johnson starring would-be blockbuster HERCULES. In the case of the Israeli BETHLEHEM and the Palestinian OMAR, however, it would seem to be more a case of something in the zeitgeist.

Both films concern young Palestinian men caught between a loyalty to country and cause, and a need to work with the enemy to protect themselves and those they love. But as Roger Ebert always said, “It's not what a movie is about, but how it is about it.” And there is much about each film that is different – OMAR is more of a tragic love story, while BETHLEHM plays like more of a straight forward dramatic thriller. Both films have a something to say about the social and political issues that serve as their backdrops, but they are both as concerned with telling a compelling story as they are at conveying a message.

At the heart of BETHLEHEM is the relationship between teenage Palestinian boy Sanfur (Shadi Mar’i) and his Israeli handler Razi (Tsahi Halevi). Despite being on opposite sides, and the fact that Razi is unequivocally using Sanfur, there is an almost father-son bond between the two could very easily prove disastrous for both of them.

Razi's main goal as an agent is to take down the terrorist Ibrahim (Tarik Kopty) who, as it happens, is Sanfur's older brother. Meanwhile, when Sanfur isn't helping Razi, he's delivering money from Hamas to his brother. Not only would this not sit well with Razi if he knew, but Ibrahim's followers wouldn't be too pleased either since they're members of the Al-Aqsa Martyrs' Brigade and not exactly Hamas fans despite a shared hatred for the Israelis and dislike for the official Palestinian authority, shown in the film to be corrupt and ineffective.

The heart of BETHLEHEM really is the relationship between Razi and Sanfur, and how the political situation they live in complicates that relationship. It doesn't matter how real the father/son type bond between them is; it will inevitably become corrupted and lead to tragedy for one or the other, maybe both. The film does not portray either of these characters as being the hero of the piece. Instead, they are both flawed protagonists drawn in shades of gray, each trying to do what they think is the right thing as best they can in an almost impossible situation.

Despite the main characters being played by non-professional actors making their screen debuts, the performances are strong across the board. Usually films that feature that kind of casting have an almost documentary feel to them, but that's not the case here at all. In its technical aspects, BETHLEHEM feels very much polished, almost “Hollywood” at times. In fact, it's perhaps a little too polished at times, occasionally falling into dramatic conventions.

Getting back to our compare and contrast from earlier in the review and putting aside which film may or may not more closely match with a viewer's political views, OMAR is the better film. Nonetheless, BETHLEHM is still a damn good movie. It's also more likely to work for a mainstream movie-going audience than OMAR, which has more of an arthouse feel to it. I say see 'em both. 3 ½ out of 4 stars.
Posted by Bob Ignizio at 12:01 AM