[BACK ISSUES: THE HUSTLER MAGAZINE STORY screens Friday March 28th at 9:40 pm, Saturday March 29th at 11:25 am, and Sunday March 30th at 4:20 pm at the Cleveland International Film Festival.] 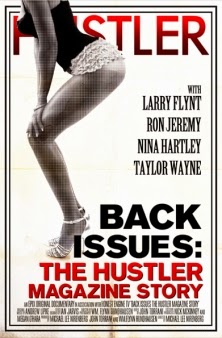 Michael Lee Nirenberg says he had no idea his dad, Bill Nirenberg, had been “a pornographer.” The senior Nirenberg worked for many years as art director of Hustler magazine, and is one of the sources for Michael's excellent documentary, BACK ISSUES: THE HUSTLER MAGAZINE STORY, playing this weekend as part of the Cleveland International Film Festival. The film provides a riveting history of Hustler's raunchy empire, from a four-page black-and-white newsletter to a multimillion-dollar media enterprise, and an insiders' view of what it was like to work for the mercurial, volatile and very shrewd Larry Flynt.


The speakers provide interesting insight into what made Hustler, the unreservedly crude, calculatedly tasteless magazine, unique. Ron Jeremy provides this assessment: Playboy models represented “the girl next door,” who the average male reader considered unattainable; Bob Guccione's Penthouse featured the “rich bitch” fashion model, also unattainable; and Hustler proffered a “raunchy, horny,” more down-market girl, who might be at home on the back of a motorcycle. “I got a shot with this girl,” thinks Joe Average, the one-handed reader. The magazine built its notoriety on “pink,” the spread-legged, gynecological photos the “classier” magazines wouldn't run, as well as the tasteless but admittedly funny cartoons. (A former staffer aptly describes Hustler as “National Lampoon with more titties.”) One reason Hustler could publish these pictures, as well as bold political exposés, gross and violent imagery, nude pictures of Jackie O., and scabrous features like “Asshole of the Month,” was that Flynt eschewed mainstream advertising, relying almost entirely on adult ads and newsstand sales. He also refused cigarette ads, so was free to print sharp ad parodies like the one that read “Welcome to Marlboro Country” over a photo of patients in a cancer ward.

There is much ground to cover in the story of Larry Flynt, and Nirenberg puts it together in a swift package, interspersing the revealing interviews with fast flips through Hustler's back pages, as well as the many headlines accrued by the notorious Mr. Flynt, Hustler's seemingly immortal clown prince. We hear about Flynt's conversion in 1978 to evangelical Christianity, under the auspices of Ruth Carter Stapleton, in 1977; he remained “born again” only briefly, later declaring himself an atheist. In the film, he says he has bipolar disorder. There is his marriage to his much-loved fourth wife, Althea, a former stripper who ran Hustler with an iron fist while Flynt was recovering from injuries suffered from an attempted assassination, and died in 1987 of AIDS. Flynt, partially paralyzed, has required a wheelchair since the 1978 shooting. He was in almost constant pain for years, which caused him to become addicted to painkillers; multiple surgeries finally eliminated his pain, but medications caused him to suffer a stroke, which has made his speech slurred. There were insane, coke-fueled years at the magazine, vividly described by former staffers, insane, wildly extravagant photo shoots, explosive editors who threw things at employees. There was Flynt's short-lived run for President. And there are many more astonishing episodes in the life of Flynt, some only glancingly touched on in this film.

The most interesting chapter of Flynt's life concerns his emergence as an unlikely First Amendment champion. His high-profile legal battles made him the subject of famous Constitutional law cases. One argument resulting from the Cincinnati prosecution reached the U.S. Supreme Court, and became the subject of the movie The People vs. Larry Flynt, starring Woody Harrelson. Another legal triumph was Hustler Magazine v. Falwell, in which Jerry Falwell sued Hustler for libel over a parody ad that described the evangelist as having lost his virginity to his mother in an outhouse. Though the page was clearly labeled “ad parody,” Falwell sued, and the Court held that public figures cannot recover damages for emotional distress based on parodies, an important Constitutional precedent that is still, as Flynt points out, taught in law schools today. (Interestingly, Falwell and Flynt later became friends.)

There have been several films, fiction and non-fiction, about Flynt, but BACK ISSUES provides a unique behind-the-scenes view of the stressful day-to-day workings at Hustler — not, save for the “pink” and the fake excrement, so different from other magazines. "It was a lot of fun and a lot of pressure," says Bill Nirenberg, who went on to do other things but, he says, "nothing as exciting."

Late in the film, the interviewees provide a wistful lament for the way things used to be, before the Internet made pornography so easily accessible, and people could still be shocked. “We were lucky,” says photographer Suze Randall, “to have taboos to break.” 4 out of 4 stars.
Posted by Pamela Zoslov at 2:01 PM