An interview with Michael Lee Nirenberg, director of 'Back Issues: The Hustler Magazine Story' 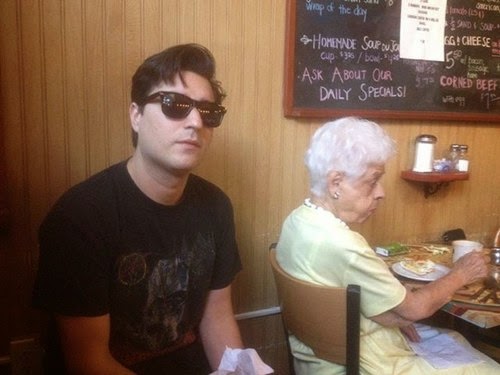 There have been films about Larry Flynt and Hustler magazine before, but filmmaker Michael Lee Nirenberg finds a different slant by going beyond the (admittedly entertaining) recollections of Flynt himself to let some of the other players in the Hustler story speak, including notably Nirenberg's dad and former Hustler art director Bill Nirenberg. The film is playing this weekend at the Cleveland International Film Festival, and because of that we had the opportunity to ask Michael some questions.

Pamela Zoslov: I just want to say I really enjoyed this film and its illuminating history of Larry Flynt and Hustler. You say in the film that you didn't know your dad, Bill Nirenberg, had worked for Hustler. How did you make that discovery, and was that your inspiration for making the documentary?
Michael Lee Nirenberg: Thanks, Pamela. I’m glad you enjoyed film. I always knew he worked for Hustler. In fact I told my entire second grade class. What I said in the film was that I didn’t know what a pornographer was and how problematic that could be. As for the second part of the question, I was on a panel at Anthology Film Archives here in NY with adult film director Joe Gallant and he mentioned it would make an interesting doc. What started as a small project filming my dad turned into 42 interviews and a full blown feature.

Bob Ignizio: The Larry Flynt/Hustler story has been told in film before, both in the well known Hollywood dramatization THE PEOPLE VS. LARRY FLYNT and in the documentary LARRY FLYNT: THE RIGHT TO BE LEFT ALONE. What do you think is the main thing that sets your take on the story apart?
MLN: Both films are from Larry’s point of view and don’t challenge it. I admire Larry, but he wasn’t always “present”. Nobody ever thought to interview the people who came up with the ideas and gave the magazine its tone and substance. No doubt Larry was the force behind it. however I had access to some great stories that have never been heard before. I’m sure some of it is news to him.

PZ: Did your view of Flynt and Hustler change during the making of the film? If so, how?
MLN: Not so much. I always liked it since I was a kid sneaking them out of my parent’s closet. If anything I can easily not look at a Hustler for a long, long time.

PZ: Larry Flynt became an unlikely First Amendment hero. What is your view of Flynt as a flag-bearer for free speech?
MLN: I really admire Larry’s guts. He’s done more for the first amendment than anyone I can think of. In a way it fell into his lap and he didn’t back down.

PZ: What most surprised you in researching and filming the documentary?
MLN: Some of the things I can’t put in the film that would be damaging to living people are surprising. What I can say is that I really like how they would fuck with people. Nancy Reagan’s real phone number in a sex ad. Hilarious.

BI: Is there any one pictorial or mock advertisement or whatever that your dad was primarily responsible for that you would consider your favorite, and why?
MLN: Its tough to say, because he had his hand in so many things. His cover designs are great. He went on to Cheri, Swank and Genesis later and they all had his touch. Perhaps only I notice it.

PZ: In the end credits, you have a dedication to your son, “without whom the film might not have come about.” Why is that?
MLN: When he was born in 2010 it gave me a sense of wanting him (and the world) to understand that his Grandfather was part of something that changed the world. His birth solidified my decision to go on this trip.