An interview with Filmmaker Beth Harrington, director of 'The Winding Stream' 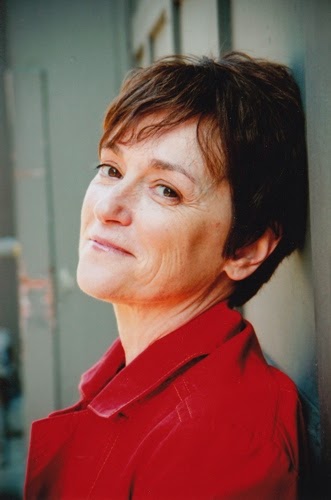 Beth Harrington's documentary THE WINDING STREAM: THE CARTERS, THE CASHES, AND THECOURSE OF COUNTRY MUSIC has been playing at film festivals across the country, including three screenings this past week as part of the 38th Cleveland International Film Festival. Harrington's previous work includes several programs for PBS and the excellent documentary about female rock & roll pioneers WELCOME TO THE CLUB: THE WOMEN OF ROCKABILLY which was nominated for a grammy. Beth was kind enough to answer a few questions for the Cleveland Movie Blog via email, and here's what she had to say.

Cleveland Movie Blog: How did you get interested in filmmaking and what films or filmmakers influenced you?

Beth Harrington: I didn't set out to be a filmmaker per se. I've always been interested in storytelling and art and music and media.  My Dad was an advertising executive and artist and singer. My mom was an art teacher.  As a kid I wrote quite a bit and loved music.  I was always searching for ways to make these things align in my life. As a teenager I was a volunteer at WBCN-Boston, one of the first progressive rock radio stations in the country. I went to college thinking I was going to be a DJ.  Later I fell in with some documentary film people while simultaneously singing and recording in a series of rock and roll bands.


CMB: Prior to directing you produced a number of shows for PBS. What did you like about working in that capacity, and what made you decide to move into directing?

BH: In the public TV work I did, producing WAS directing. It was all sort of intertwined. I still have a hard time thinking of these rolls as separate functions and I've really never "just" directed - since so much of making a documentary and directing a documentary involves getting to know people and places and working out the logistics of filming all that. I don't know what it would feel like to not produce. Even though, I have to admit, I find certain aspects of producing drudgery at times.


CMB: You sort of blur the lines between documentary and narrative film in your featurette 'The Blinking Madonna', but do you have any desire to make a full-on fictional film?

BH: I think I would enjoy that. There would be such freedom in telling actors what to do instead of waiting for people to do and say things that form a story! And "Blinking Madonna" certainly afforded me that opportunity and I loved it. I'd kind of thought I would have directed a feature by now. I'll have to get on that.


CMB: What was it about the Carter Family that interested you in them enough to make a movie?

BH: I like connecting the dots in stories. I knew that most people know Johnny Cash but that many know June Carter Cash, but I was pretty certain that the story of how those two connect to to the foundations of country/folk/Americana music was not well understood. So I wanted to lay that out for the viewer. Plus I just think it's a cool story of a family deeply immersed in music - from the early part of the last century to the present.

CMB: While the Carter Family certainly aren't unknown, they don't enjoy quite the same widespread recognition among the general public as other country pioneers like Hank Williams Sr., Johnny Cash, Patsy Cline, or even Jimmie Rodgers. Any idea why that should be the case, and was rectifying that situation part of what motivated you to make your movie?

BH: Yes, absolutely. I wanted  people to know them, as the great Texas musician Joe Ely says in the film, "just like you should know who the first president of the United States was."  I think the Carters weren't well known for a variety of reasons. One is that they didn't tour as much as a Jimmie Rodgers
because of the obligation both Sara and Maybelle felt to their children. Another was that the divorce of A.P. and Sara was pretty much the death knell for the act just as they were starting to get known on Border Radio. And of course, they were pioneers in their field and the business was very different then and publicity was different then.  There isn't even any film footage of the Carters.

CMB: Given that some of the participants have passed away since you interviewed them, do you sort of breathe a sigh of relief that you made the film when you did?

BH: Well, I did have a sense of urgency. June Carter Cash died when I was visiting with her cousins in Virginia. I never got to interview her. Johnny Cash passed away only three weeks after we interviewed him. Janette and Joe Carter are gone, as is Mike Seeger and historian Charles Wolfe. I was glad and honored to have interviewed all of them. And when I was having trouble finishing the film - because of funding issues - I did comfort myself with the idea that I culd probably just donate the footage to a great archive and someone - a scholar or researcher - would someday find this material useful.

CMB: I'm glad you didn't shy away from talking about how A. P. Carter more or less took credit for other people's songs. It's the one thing, as much as I appreciate how important the group was, that bothers me a bit. Do you feel it tarnishes the Carter legacy at all?

BH: I think it's complicated and tricky to view what A.P. did with contemporary eyes. What we know about intellectual property now, well, maybe someone doing that now would be judged harshly. But not many people were doing what he did back then and I don't think there was a general sense that he was going to get rich doing it (and in fact didn't get rich the way we think of it now in the music business). And what he created out of what he collected and copyrighted is of lasting value to us culturally. So I don't think it tarnishes their legacy at all. But I think it's a good discussion to have nowadays with so much up for grabs in that realm - sampling, creative commons, the posting of free content on the internet.

CMB: It's kind of a strange time for documentary film. On the one hand, PBS and streaming services like Netflix, which seem to have a strong commitment to nonfiction film, are making it easier for movies like yours to be seen by wide audiences than ever. On the flip side, except for a handful of high profile films every year, most documentaries don't get much of a theatrical run. How do you feel about that, and does the fact that you know, at least to some degree, that TV is where your film is most likely to be seen change the approach you take?
BH: I'm struggling with all of this, just like most creative people are. This film took me longer than any film I've ever made because the changes on how things get viewed meant that funding wasn't available up front and there isn't much on the back end now either.  Theatrical is pretty much gone. DVD is disappearing. Video on demand has promise but even that is changing as we speak. PBS shows films but doesn't pay a lot for them. It's hard out there. I might not have started this film if I knew what I know now.  But I also wasn't going to let it languish, unfinished. I'm stubborn like that.


CMB: How important are festivals like the Cleveland International Film Festival to the marketing and success of your films? Does a festival win translate to a better shot at wider theatrical release and/or a better TV deal?

BH: As with everything else, the role of festivals is changing, too. I think a film getting into a well-established and time-honored festival like Cleveland shows decision-makers that taste-makers and audiences appreciate your "product" (and yes, I hate using that word). I think lots of decision-makers in the industry need that indicator. So I think it certainly helps.


CMB: Your previous documentary WELCOME TO THE CLUB also dealt with forgotten musicians who deserved to be better known. Is that a theme you see yourself coming back to, or will your next film be something completely different?

BH: I love telling these kinds of stories. I have one in my back pocket about an all-female rock band that I'd like to make. But things will have to change somehow in funding for me to undertake another music documentary. They're just so expensive to make. But never say never, right?