[AFTERNOON OF A FAUN: TANAQUIL LE CLERCQ opens in Cleveland on Friday March 14th exclusively at the Capitol Theatre.] 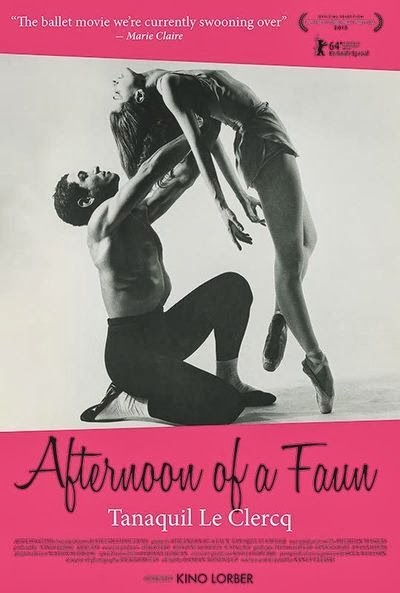 Nancy Biurski's documentary AFTERNOON OF A FAUN: TANAQUIL LE CLERCQ showcases the life of the extraordinary ballet dancer Tanaquil Le Clercq. Referred to as "Tanny" by friends and those that she danced with, she was one of the greatest ballet dancers to work with the great George Balanchine.

In addition to starring in Balanchine's ballets, she was his muse. The couple married and continued to work together as they toured countries performing some of the most exquisite dances around the world.

Tanny seemed to be on top of the world when an awful sickness fell upon her: she contracted the disabling disease, polio. Although Tanny survived, she lost the use of the muscles in her legs. The marvelously talented young woman was stripped of her abilities far too early in life and she was never able to dance again.

AFTERNOON OF A FAUN tells the story of Tanaquil's brilliant rise and tragic fall through pictures, classical music and interviews from those who worked with her closely.With most of the images being still photos and the ballet music rather dreary, the film may come off as a bit dull and slow-moving for those uninterested in the art of ballet.

The story itself is rather slow and a bit jumbled. Audiences may be expecting the film to solely revolve around Tanny's career as a ballerina. However, this is not the case. Far too much time is spent revisiting Tanny's love interest in not only Balanchine, but also in fellow choreographer Jerome Robbins. There is even a good amount of time spent justifying Balanchine leaving the disabled Tanny after years of marriage.

If one looks past the unnecessary addition of the love interests, there is a great story to be told. Tanny's life was ripped away from her; her passion, her talent, her rise to fame. Despite a few years of depression and recovery, she was able to maintain happiness in her life. Whether it was teaching ballet from her wheelchair or gaining the ability to take care of herself, Tanny persevered.

There is not much more to be said about the documentary as it is very simple with very little added depth. The story is there, but it doesn't seem to be displayed to audiences correctly and those not familiar with ballet will find it of little interest. 2 out of 4 stars.
Posted by Grace Snyder at 12:00 AM