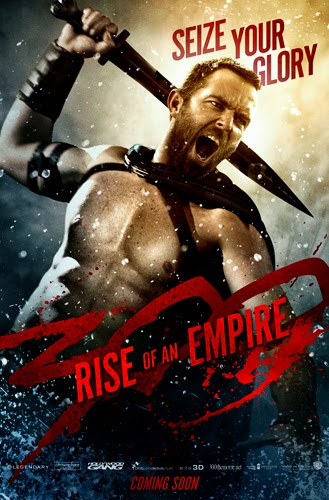 Taking place before, during, and after the events of 300, 300: RISE OF AN EMPIRE tells the tale of another small but determined band of warriors defending their homeland against overwhelming numbers. Only instead of King Leonidas and his Spartan soldiers holding the land-locked “Hot Gates” against Persian god-King Xerxes and his army, here we have a handful of Athenian warships commanded by Themistocles (Sullivan Stapleton) pitted against the massive Persian navy. Since Xerxes (Rodrigo Santoro) is occupied with the events we saw in 300 for most of RISE OF AN EMPIRE, he doesn't get a lot of screen time here. Instead he sends his right hand woman Artemesia (Eva Green) to deal with the Athenians in his stead.

Ridiculously outnumbered, Themistocles' only chance is to win battles using superior strategy. If he can hold out long enough perhaps the Greek city states, reluctant to go to war, will finally realize they have no choice but to band together and fight back against the Persians in the name of freedom and democracy. Artemesia, on the other hand, seems only interested in finding a man worthy of being her lover, allowing one general after another to set out on half baked attack plans that the Athenians easily triumph over.

Eventually Artemesia realizes that the only man worthy of her is Themistocles, so she invites him on board her ship in neutral waters. This leads to a ridiculous fight/sex scene in which the two enemies thrash about the cabin while engaged in coitus. Despite Artemesia's considerable charms and energy, Themistocles refuses to change sides, and the battle resumes. Only now, Artemesia is pissed enough to start taking things seriously. It seems inevitable that the Athenians will fall before the fury of a woman scorned.

Taken on strictly a surface level, 300: RISE OF AN EMPIRE is slick, mindless fun provided you don't need much in the way of plot or character development, and as long as gallons of CGI blood and gore don't bother you. Thematically, there's not much here, either. Just a glorification of war and violence. Every dismemberment and spray of blood is lovingly captured in slow motion for the audience to ooh and ah over, and if you catch the film in 3D the blood practically hits you in the face. But hey, it's all in the name of freedom and democracy and honor and stuff.

Yes, this is a big dumb action movie and we're supposed to just have fun with it and not think too deeply about what it means. I've certainly watched and enjoyed more than my share of films that glorify violence, and the fact that I didn't enjoy the action scenes in RISE has more to do with my preference for physical effects over CGI gore than any message the film may be sending. That, and the fact that the film feels like one long fight scene to the point that it simply becomes wearisome. Regardless, the message is in there, and as such it bears mentioning.

More troubling to me personally was the origin story given for Artemesia. Artemesia is herself Greek, but her parents were raped and killed by Greek soldiers. She was then sold into slavery and raped some more until eventually being rescued by a Persian emissary who took her back to his country. There, Artemesia proved herself to be a great warrior and strategist, eventually becoming chief adviser to the King.

I suppose this might have been intended to give some sort of tragic aspect to the character, but the way its played just comes off as distasteful. We're certainly never led to feel any sympathy towards her because, whatever her ordeal, she just shakes it off and becomes a sexually aggressive bad-ass and the main embodiment of evil in the film. Eva Green does a spectacular job evoking cartoonish villainy, and her performance is so over the top and fun that one may be willing to let it all slide, but the whole thing just left a bad taste in my mouth. And before you say, “well, that's history”, no, it isn't.


300 helmer Zack Snyder wrote and produced RISE, but this time around it's Noamm Murro in the director's chair. Not that you'd notice, as the look, style, and tone are pretty much the same as the original. The problem is, the novelty of the first film's visuals have faded considerably given how often they have been imitated and satirized, and there isn't enough that's fresh or original about the story to keep this from feeling like a pale imitation. It would be an exaggeration to say that 300: RISE OF AN EMPIRE is nothing more than 300 on the ocean, but not by much. 2 out of 4 stars.