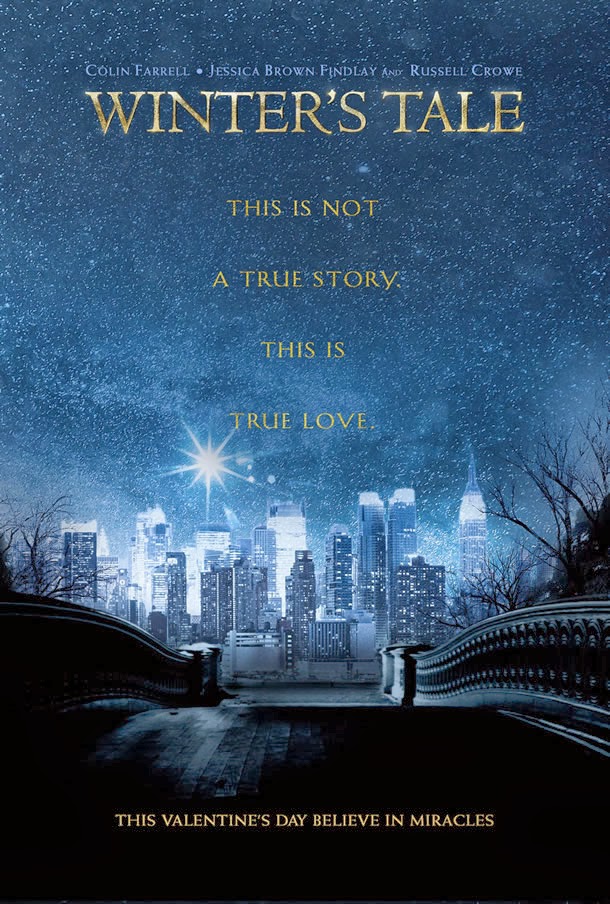 Although an Academy Award winner for his A BEAUTIFUL MIND screenplay, Akiva Goldsman has mainly written and produced mediocre to downright awful films more likely to win Razzies than Oscar's. Now he proves himself a true triple threat by not only writing and producing WINTER'S TALE, but directing it as well.

WINTER'S TALE takes place in some sort of slightly skewed fantasy version New York City, both in the 1900s and the present. An unseen female narrator informs us with much gravity that we're all connected, everyone has a miracle inside them, and friendship is magic. Okay, that last one is 'My Little Pony', but it's on a par with the rest of the metaphysical philosophy spouted by the film.

Our protagonist is Peter Lake (Colin Farrell), a skilled thief with a good heart who, when he was a baby, was tossed him in a toy boat by his parents so he could stay in New York City while they were deported. Great plan, mom and dad. Peter got to live in New York, alright, but he wound up being raised by Pearly Soames (Russell Crowe), a ruthless gang leader who also happens to be a demon. Peter doesn't want to work for his surrogate dad anymore, but as is often the case with demons, Pearly isn't the sort to let anyone out of his grasp. Luckily Peter finds a magical horse (who is apparently really a dog) able to fly him away from danger and lead him to the doorstep of the lovely Beverly Penn (Jessica Brown Findlay). Beverly is dying of consumption, which in the finest LOVE STORY tradition makes her all the more beautiful and desirable.

It's strongly implied that Peter is destined to use his miracle (remember, everyone has one) to save Beverly, something Soames hopes to prevent with the help of someone called “The Judge” (Will Smith). I don't want to spoil how this plays out, so let's just say we eventually encounter Peter in the present day where he is suffering from amnesia. The plot picks up from there, bringing in two new major characters in the form of newspaper food writer Virginia Gameley (Jennifer Connelly) and her daughter Abby (Ripley Sobo), who is dying of cancer.

Rife with cliches and forced sentimentality, WINTERS TALE feels like some hokey adolescent romantic fantasy brought to cinematic life. In reality the film is based on a highly regarded novel by Mark Helprin (which this reviewer has not read). So perhaps the fault lies not with the source material but with Goldsman's adaptation of it. It certainly wouldn't be the first work of literature he's butchered, as fans of Isaac Asimov's short story collection “I Robot” and Richard Matheson's novel 'I Am Legend' can attest.

But wherever the blame lies, taken strictly on its own terms WINTER'S TALE is a trite and convoluted film that tries way too hard to be the perfect Valentine's Day date movie. It labors under the mistaken and patronizing belief that such a goal is best accomplished by including plenty of action and adventure for the guys and plenty of romance for the ladies. Evidently the idea of just making a good movie didn't occur. 2 out of 4 stars.
Posted by Bob Ignizio at 12:01 AM