We Steal Secrets: The Story of Wikileaks (now on video)

[WE STEAL SECRETS: THE STORY OF WIKILEAKS is now available on home video.] 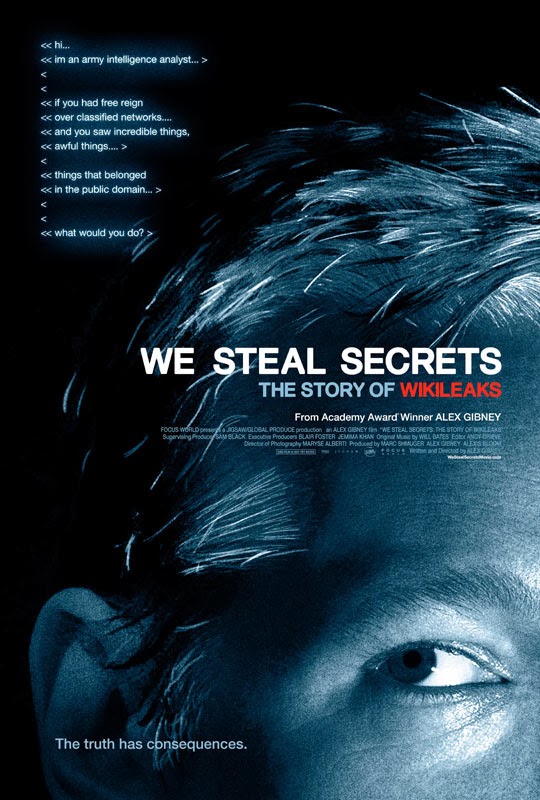 Right now, we're in the resurgence of abominable child-molestation accusations against Oscar candidate Woody Allen (who may well be innocent, but who is a filmmaker, which in my book is halfway towards being guilty - whatever the charges).

I'm amused that it mostly seems to be well-educated women who rise to Allen's defense...just as it was upscale feminists who slobber all over Bill Clinton. Makes one wonder who it was women ever slept with in the first place to get the right to vote... Oh, I remember, Warren G. Harding. Anyway, if Ariel Castro hadn't died in prison, he'd have the girls campaigning for him as well. Ladies love the bad boys, right, Justin Bieber?


What's my bitterness got to do with the worthy documentary WE STEAL SECRETS? I'll try to get to that, through the miracle of rambling, circumbendibus writing. Remember THE FIFTH ESTATE, the dramatization of Julian Assange, Bradley Manning and the Wikileaks affair, exposing dangerous government secrets and lies? Not many other filmgoers did, the travails of Katniss Everdeen and Bilbo Baggins being far more relevant to their lives (and on more screens, let's face it).

But, in the docu-feature world, name-brand documentarian Alex Gibney told the Assange/Wikileaks affair in nonfiction form in WE STEAL SECRETS: THE STORY OF WIKILEAKS, which got a Focus Features/Universal Pictures release that actually got to auditoriums, for a while, in 2013. Here it was released at the Cedar Lee, and it probably drew a crowd so small the Obama NSA spies keep records of their names and addresses on a 360K five-inch floppy. Sorry, a little old-time computer humor, there. I liked following the hacker scene, back when things were dial-up.

WE STEAL SECRETS does open with a flashback to those old days, when an insidious computer "worm" virus called Wanked was evidently launched at NASA, deliberately, by a bunch of old-school hackers in Melbourne, Australia. It is only circumstantial that later world-famous Julian Assange, an "ethical hacker," was one of the cyber-conspirators, but the movie makes the most of it.

Scriptwriter-director Gibney's narrative picks up years later, as Wikileaks, Assange's website promising complete anonymity to whistleblowers and informants in high places, goes live. First the site exposed misdeeds in the Icelandic banking community that causes economic turmoil in that tiny nation (how did I miss this story in the news? Guess everything about Iceland escapes my notice if Fridrik Thor Fridriksson doesn't make a movie about it). Then Wikileaks intelligence of corruption and abuse among Mideast regimes fueled public rage that sparked the "Arab Spring" protests.

WE STEAL SECRETS is only half about Assange, really. The other protagonist is Bradley Manning, the gender-confused computer enthusiast (finding in the online world suitable forums for his cross-dressing) who would somehow luck into a position with the US Army - one in which he could vent his horror and discontent at being billeted among a bunch of trigger-happy rednecks and snipers by spilling harmful Iraq- and Afghanistan-occupation military secrets to Wikileaks.

The documentary makes the point that a lot of Manning's goriest scoops actually circulated in and outside the military (gun-camera footage being file-shared like proud deer-season footage). I confess, I somehow fell behind in my atrocity-video watching, so I never had heard of "Collateral Murder," an especially hyped Wikileaks production showing civilians and Reuters reporters mown down by US gunfire as American soldiers chatter (yes, they really talk like the bad-movie dialogue in BATTLESHIP) about `lighting up' the targets. Scary stuff. Not recommended viewing for you zombies with Chinese-made Support-the-Troops magnets on the oil-guzzlers you drive.

Of course, these horrors (most of which, for those keeping score, surfaced during the Obama regime) were also covered in major news outlets. But it was on Wikileaks and Assange that the wrath of the Establishment fell, with blowhard like Bill O'Reilly earning their thug-patriot cred by calling for no less than Assange's execution/assassination. Had Mr. O'Reilly asked the same fate for Assange's declared media partners, such as the editors of The Guardian newspaper, the Fox News lineup would be rather different right now.

But when lynch-mob justice did try to catch up with Julian Assange, it was from a different source: two Eurotramp girls filed what amounted to rape charges against him in Sweden. One appears onscreen here, so heavily disguised in makeup she looked like, well, Bradley Manning in tranny persona. And as much as the Swedish case (which sent Assange seeking political refuge around the world) looks like a classic CIA smear, Gibney finds that, yes, Julian Assange is a bit reckless and full of himself, in a virtual rock-star kind of way. Assange has fathered enough illegitimate children to get him drafted into the NBA, his slimy dealings with women right up there with Roman Polanski and Woody Allen (see, told you I would get to Woody Allen, eventually).

His champions here ask that viewers please step back and consider what Wikileaks means and the international corruption it revealed, quite apart from the slightly dubious moral character of its figurehead. Of course, detractors can and have criticized WE STEAL SECRETS as hardly fair and balanced, as it relies heavily on players in the Wikileaks saga who have been the most willing to talk (often to peddle their own memoirs). An aloof Assange, meanwhile, offered an interview with the filmmakers only in exchange for $1 million, which they naturally refused. Either he sabotages himself, or he doesn't know much about the cut-rate world of nonfiction cinema.

Even so, Gibney's accounting of this complicated, not-quite-concluded story is dynamic, transfixing and carrying the heft of a John LeCarre novel, and the cast of colorful characters is right up there with, well, Woody Allen's exes. Probably another guy who won't be sharing a set with Bill O'Reilly either, but you can never count out what Fox does for ratings. (3 1/4 out of 4 stars)