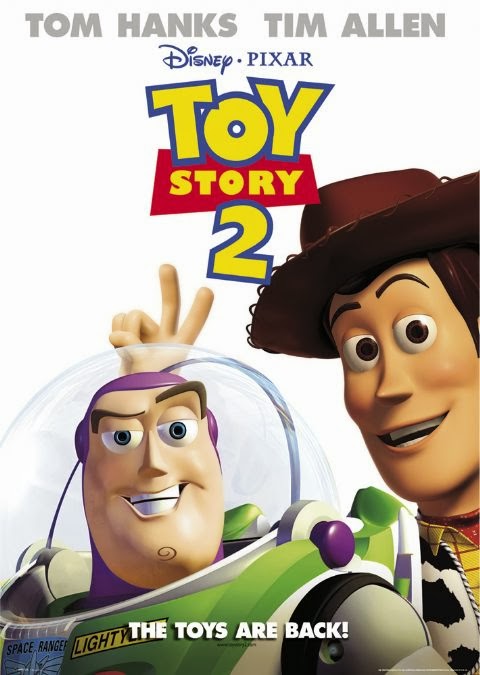 Someday, if and when entertainment historians contemplate how technology made human actors largely obsolete (and not a moment too soon), the TOY STORY movies will get their due. With TOY STORY 2, the sequel to the 1995 original sensation, Pixar's computer-generated characters based on household toys display more personality, charisma, emotion and finesse than their flesh-and-blood counterparts in most live-action Hollywood productions.

Of course, it's an unfair comparison. The digital thespians get consistently better scripts.


It's at such a sale that Woody gets snatched eagerly by Big Al (Wayne Knight), a greedy toy tycoon and collector who knows something that Woody doesn't. The slightly tattered cowboy is part of a now-prized playset tied into a long-cancelled Howdy Doody-style TV puppet show. An intact Cowboy Woody is the final ingredient Big Al needs to sell the entire assortment to a Japanese toy museum.

While Buzz Lightyear and the other toys launch a haphazard rescue mission, Woody faces the toughest choice of his quasi-life: a grim future as an unappreciated cast-off from beloved Andy's toy chest, or guaranteed immortality in a kiddie museum.

Despite the stacked-deck portrayal of Big Al as a loathsome buffoon (Pixar's silicon-imaged toys are delightful; their humans are all a bit creepy, in my view), there's actual drama in this existential dilemma. "I'm sorry, honey, but toy's don't last forever," says Andy's mom, as Woody's eyes widen in horror. Not even the much-ballyhooed Japanese animated import PRINCESS MONONOKE, in theaters around the same time, contained moments that hit home so hard for viewers of all ages.

Home was where the heart was in the first TOY STORY, where the action seldom left two adjacent suburban households. Like Disney's earlier sleeper HONEY, I SHRUNK THE KIDS, the movie was able to find pure magic in everyday settings. TOY STORY 2 takes the toys out of their native environment for extended periods, and this could have turned into another BABE: PIG IN THE CITY, where much joy was lost once its hero left the farm. Fortunately, Pixar's creations hold their own in the outside world - and there has never been a better explanation for where all those annoying Cleveland traffic cones and barrels are coming from.

The only serious flaw is a divergent subplot about Buzz Lightyear facing his origins and a mortal enemy. It's not a bad idea; in fact it deserves a feature of its own. Here the stuff just gets in the way, and then wraps up with a STAR WARS gag that was lame when Mike Myers tried it in his AUSTIN POWERS sequel. Oh, and an army of Barbie dolls just can't match the memory of their nightmare mutant counterparts in Joe Dante's DreamWorks live-action toy story-fantasy SMALL SOLDIERS.

Needless to say, Disney's marketeers cashed in heavily on marketing ties for TOY STORY 2, with merchandise sales To Infinity and Beyond. I didn't mind this time; they earned it. (3 1/2 out of 4 stars)