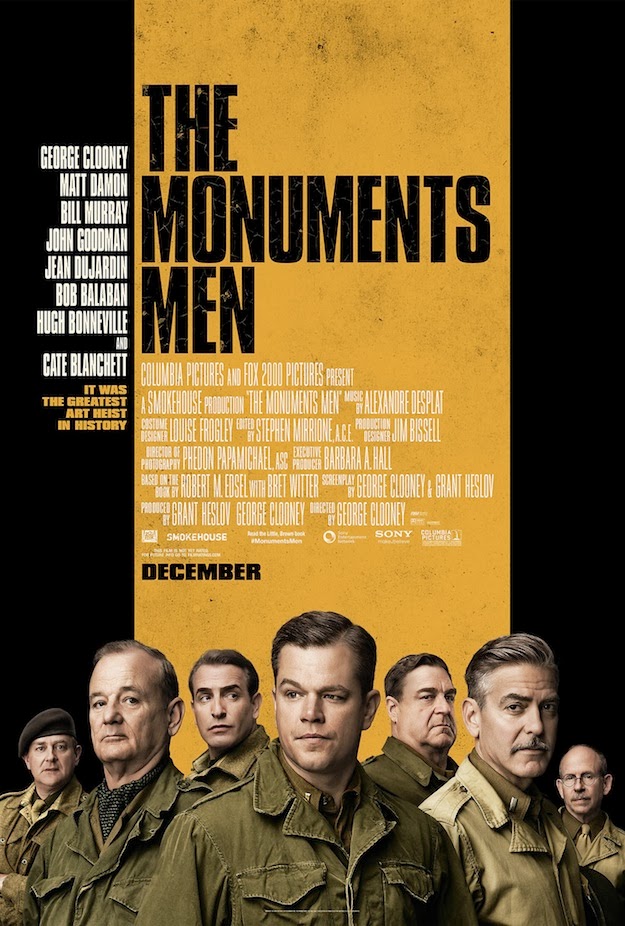 With its dramatic real-life subject matter and stellar cast, you'd think THE MONUMENTS MEN, the new movie directed by George Clooney, would be more, well, monumental. It's a comedy-drama about the Allied mission to rescue the art treasures of Europe from their methodical plunder by the Nazis. Clooney stars with Matt Damon, John Goodman, Bill Murray, Bob Balaban, Hugh Bonneville and Jean Dujardin as members of the special platoon of curators, museum directors and art historians who undertake the dangerous job.

All that star power works against the movie's plausibility, making it feel more like OCEANS 11 in Army drag than a realistic history. Clooney, whose directorial efforts have been variable (ranging from GOOD NIGHT AND GOOD LUCK to LEATHERHEADS), seems to have trouble settling on the right tone, so the movie lurches uneasily from M*A*S*H/Hogan's Heroes barracks comedy to mawkishness as two members of the platoon are killed. (The two who perish are played by the less famous of the bunch, so their deaths are preordained.)

The movie is based on Robert M. Edsel's book The Monuments Men: Allied Heroes, Nazi Thieves and the Greatest Treasure Hunt in History. Clooney plays Frank Stokes, a character based on George L. Stout, the art conservationist and museum director who was one of the first recruited for the U.S. Army's Monuments, Fine Arts, and Archives section. In 1943, Stokes assembles his platoon, including James Rorimer (Damon), who would later become director of the Metropolitan Museum of Art; Sgt. Richard Campbell (Murray); Sgt. Walter Garfield (Goodman); Lt. Jean-Claude Claremont (Dujardin); Pvt. Preston Savitz (Balaban); and Major Donald Jeffries (Hugh Bonneville). There are some amusing scenes as these aging veterans have to adjust to the rigors of being back in uniform. Garfield is alarmed that the young soldiers are shooting real bullets in training exercises; Savitz asks eagerly whether they'll get to kill anyone.

Stokes defines the purpose of the mission: “What we're fighting for is our culture and our way of life.” Preserving the culture, he says — “making sure that the statue of David is still standing and the Mona Lisa still smiling” — is vital and worth risking lives. Tell that to Don Rumsfeld, whose response to the looting of antiquities in Iraq in 2003 was a shrugging “Stuff happens.”

The platoon pushes on to various remote cities and mines where the stolen art treasures may have been secreted for the purpose of Hitler's planned “Führer Museum.” They are racing against time, as the Nazis plan to destroy the artworks as part of their Götterdamerüng as the Reich falls. We are given a taste of the horror that represents as we watch a framed museum masterpiece consumed by flames. The platoon is not only fighting the Nazi thieves but also the approaching Russians, whose “Trophy Brigade” is plundering German art treasures (some of which they still have).

One of Rorimer's tasks is to get the cooperation of Rose Valland (Cate Blanchett, deploying a French accent that sounded a little German to my ears). Valland was a French art historian and member of the Resistance who secretly recorded details of the Nazi plundering during the German Occupation, when she was overseer of the Jeu de Paume Museum. There are moments of tense drama as a Nazi officer menacingly questions Valland, whose brother has been shot while trying to prevent the shipment of art to Germany. There are also some amusing scenes involving Rorimer's lamentable attempts to speak French.

One member of the platoon, sent to Bruges, Belgium to rescue a priceless Madonna statue, is sacrificed in the effort. The script actually has his fellow soldier say “Hell of a thing....hell of a thing.” Another soldier dies for the mistake of stopping his Jeep to smoke a cigarette.

The film is episodic, playing like a series of blackout scenes rather than a flowing narrative, and the comic elements are listless and a little out of place. It may be that no one knows how to do this sort of thing anymore, the elegant blending of war comedy and drama found in movies like THE 49TH PARALLEL and STALAG 17.

THE MONUMENTS MEN is patchily entertaining and has some good things to say about the importance of art, though the same subject was was thoroughly covered by the 2006 documentary The Rape of Europa. However, that documentary, unlike this movie, does not feature a surprising cameo by Clooney's charming 80-year-old dad, Nick Clooney, a journalist who at one time was a popular TV host in Cincinnati and Columbus. 2 1/2 out of 4 stars.