[THE END OF TIME screens Thursday February 13th and 16th at 8:35 pm at the Cleveland Cinematheque.] 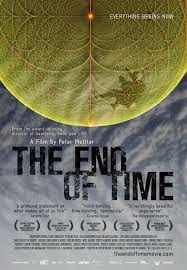 The Cleveland Movie Blog observes with respect the passing of the legendary Shirley Temple Black, the former child actress who was once the biggest star in Hollywood - arguably the whole world.

Shirley Temple was lucky to have had her illustrious heyday during the Great Depression. Because, if all our other child superstars are anything to go by, could you imagine how badly Shirley Temple might have turned out...had she worked in the movie industry of today? Especially for Disney? Ugh.

She'd be all grown up and "twerking," in the world's first secret internet sex tape shot especially in Real3D v.2.0 (a new process illegally developed by James Cameron's delinquent kids). She'd be listed in chemistry textbooks for being found addicted to substances new to the Periodic Table of the Elements. She'd be facing deportation to the International Space Station after breaking disturbing-the-peace laws in every sovereign nation. She'd be having petitions signed against her by Justin Bieber, Amanda Bynes, Lindsay Lohan and (via Ouija board) Emperor Caligula of Imperial Rome. All agreeing that adult Shirley's antics are way outta line.

Yes, the icon's passing does make one think of the present day - and extrapolate into our grim future. Allow me to dare and speculate when the 21st century's own most notorious fallen child idol, Miley Cyrus, finally goes to her own eternal rest after a lifetime of decadence...

I picture a deceased Miley lying in state, her emaciated body wasted by long years of vice, drugs and sex. The eyes sunken in skull-lined sockets in a deeply creased face. Her skeletal limbs wrapped in gray, parchment-like skin. Patches of sparse, thin, white hair on her bony scalp... Don't worry, this is still a long time off. When Miss Cyrus is, like, age 27 or even 28.

(And the mourners filing past her coffin will say, "At least Miley was always a class act. Not like the new breed of child stars we have now. They're really out of control...")

Point is, time is a very subjective kind of thing. That's the message, in part, of Peter Mettler's new nonfiction feature THE END OF TIME. This is one of those impressionistic filmic essays, very unconventional and non-bound by structural elements as it explores, well, whatever. Usually I'm pretty intrigued by this semi-experimental type of documentary, in the way so many of us were transfixed by KOYANISQAATSI. I just get carried away by the wash of images and audio.

But this THE END OF TIME left me rather cold a lot of the, er, time. After a while I sort of got annoyed with the sense I was watching a science docu from which one scarcely learns ANY science. Meaning big thumbs-up from school boards across Ohio, at least.

THE END OF TIME begins with stock science-footage of historic high-altitude parachute jump in 1960, during which, according to the aerospace guy who did it, time seemed to stand still. We then go to (without any real intro or elaboration) to the underground CERN complex, for a walk-around the incredible support technology for the giant particle-accelerator ring in which physicists study basic bits of the universe and try to comprehend the Big Bang (and, hence, goes back into time, sort of). Then to Hawaiian islands, for scenes of molten lava spewing forth from an active volcano and straightaway solidifying into bits of the rocky island that have been here for eons. A lone homeowner in a community that was wiped out by years of lava flow continues to persevere here, and he says that time sure seems to run at a different pace when one is so isolated, amidst the apocalyptic eruption-scapes. Then onto Detroit, Michigan, where a ruined, deserted city is in a state of vast, slow decay, as its own time appears to have run out.

THE END OF TIME makes one indeed contemplate time, and while it's a cheap shot indeed, someone's gotta say it (and Mettler, who previously did the similarly unconventional think-piece MANUFACTURED LANDSCAPES, may even be after this reaction): like, man, when is this thing going to be over!? At 114 minutes it's on the leisurely side for a nonfiction film, let alone a basically plotless marathon of contemplation and imagery.

Art-house intellectuals quite adore this, as offbeat and refreshingly non-formulaic. Indeed it is. But take it from me (and I was just as surprised as you), that watching lava dry and watching paint dry can be very much the same thing. Moreover, I couldn't help but think the film brazenly borrows motifs and visuals from previous documentaries such as THE CITY DARK, DETROPIA, the Ron Fricke/Mark Magidson collaborations, a whole mini-genre of photo exhibits detailing the decomposition of Detroit. And, of course, Werner Herzog's short subject LE SOUFRIERE, famously about a mountain-dweller in Central America refusing to evacuate despite a volcano eruption. A meanie critic (like, one who makes fun of Shirley Temple) could say this film commits the double sin of not just being boring but blatantly derivative.

So does it make me a Philistine that I wasn’t into END OF TIME more? Like the geeks who would complain that there’s no mention of Doctor Who or the Batman villain who’s most time-oriented, the Clock King? I guess the fact that I even know there is a Clock King is pretty damning all in itself. In my feeble defense, I did find grokk some parts. How the high-tech circular plates and fittings of advanced physics research equipment resemble the religious mandalas of Buddhist shrines. How all astronomy essentially looks backwards in time. How Detroit is in worse shape than Cleveland…

No kidding. The Michigan part of Mr. Mettler’s journey through space/time takes us to the Detroit Electronic Music Festival, which is apparently one of the few signs of life in the Motor City now. I guess a DJ there has some observations to make about time (though for the life of me I can’t remember what they were). But it got me to thinking, oh man, when your post-industrial city is taken over by “video artists” and music festivals constantly, forget it - you’re done. That just means the whole metropolis is so dead, deserted and empty-storefront-festooned, that whack-job performers can rent whole streets out dirt-cheap to stage their happenings.

And thus it doesn’t bode well, to my way of thinking, that Cleveland’s got, like five or six of these regular festivals throughout the year. Now look who’s running out of time.

R.I.P. Shirley Temple, hopefully tap-dancing in heaven with Bill "Bojangles" Robinson. Thanks for getting us through the last Depression. For this one, it’s pretty much HOBBIT sequels and Grand Theft Auto V.

[Reviewer epilogue: As Bob Ignizio will attest, I was horribly past-deadline late in posting this review. So, regarding my lukewarm opinion on this flick, you can take into consideration my own unhappy relationship with time.] (2 1/2 out of 4 stars)
Posted by Charles Cassady Jr. at 5:21 PM