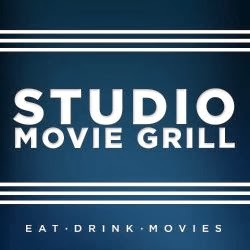 Studio Movie Grill Arena Grand (“SMG”), opened its doors last month with a ‘film cutting’ by Mayor Michael B. Coleman and SMG’s Owner and CEO Brian Schultz, and a very successful canned food drive, which raised 3,166 pounds of food for the Mid-Ohio Foodbank.

“We appreciate the efforts of SMG Arena Grand to help put food on the tables of our hungry neighbors here in central and eastern Ohio,” said Matt Habash, president and CEO of Mid-Ohio Foodbank.

· Brews-N-Views – Retro favorites from the action, comedy and sports genres play the first Wednesday of each month at 7:30 p.m. ALIEN opens the series on Wednesday, February 5 hosted by 99.7 WRKZ, The Blitz. Buckets of Brews will be available for $24.

· Girls’ Night Out – Enjoy your favorite ‘chick flick’ the second Wednesday of each month at 7:30 p.m. Hosted by local TV and radio personality Shawn Ireland, the series begins on Wednesday, February 12 with NOTTING HILL. As an added bonus, SMG is currently offering $5 Sobieski Vodka Cosmos on Wednesday nights.

· Special Needs Screenings – To accommodate children with special needs, these screenings will have the lights turned up, sound turned down, and will allow kids to talk, dance and sing as desired on the select Saturdays of every month. These films are free for children with special needs, as well as their siblings, with matinee pricing for general attendees. THE LEGO MOVIE, rated PG, will play Saturday, February 15 at 11:00 a.m. The series will be held in association with Nationwide Children’s Hospital (Center for Autism Spectrum Disorders) and OCALI.

· Family Rewind – These screenings showcase beloved childhood films perfect for all ages on the third Wednesday of each month. This month’s timeless classic is THE NEVERENDING STORY on Wednesday, February 19 at 7:00 p.m. Tickets only $2

· SMG Toons – Fun for the whole family! SMG Toons provides the opportunity for the entire family to enjoy a series of popular cartoons every Saturday and Sunday at 11:00 a.m. CARE BEARS: A BELLY BADGE FOR WONDERHEART is this month’s feature.

· Special screenings of GENERATION IRON are scheduled during the Arnold Sports Festival (shown at 4:30 p.m., 7:30 p.m. and 10:30 p.m. on February 28, March 1 and 2). This new documentary “examines the professional sport of bodybuilding today and gives the audience front row access to the lives of the stars of today’s international bodybuilding arena.”

· SMG will also host several other screening series that feature documentaries, concerts, advance screenings, independent films, film series, Game Day (local and national sports) and original programming! Sign up for the e-blast for more information on the website at https://www.studiomoviegrill.com and/or become a Facebook fan at https://www.facebook.com/ArenaGrand.

All patrons who park in the garage adjacent to the Arena Grand on 175 West Nationwide Boulevard can present their ticket for validation to receive $1 parking for each four-hour visit. This offer is valid every day.

Multiple SMG locations have been crowned the “Best Place to Take a Date”, making SMG Arena Grand the perfect destination for Valentine’s Day! Guests can enjoy the 2 for $25 Combo Menu allowing couples to choose one appetizer and two entrees as well as receive 25% off SMG’s signature bottles of wine.

Food and drink specials are offered daily, including margaritas on Mondays, Tito’s highballs on Tuesdays, endless pizza every Wednesday and Sunday, free kid’s meals with an adult entrée on Thursdays, and discounts off bottles of wine on Fridays and Saturdays. Five percent of purchases from the SMG Chefs for Children special menu will be donated to non-profit organizations serving children with special needs.

SMG Arena Grand is Studio Movie Grill’s fifteenth location and the first in Ohio. The SMG brand is growing nationally with locations in Indiana, Arizona, Georgia, Illinois, North Carolina as well as its home state of Texas, where it is headquartered and has eight locations. For more information, please visit www.studiomoviegrill.com.

Committed toward creating hunger-free and healthier communities, Mid-Ohio Foodbank works with 550 partner agencies in 20 central and eastern counties in Ohio. Last year, the Foodbank distributed more than 50 million pounds of food, enough to provide over 107,000 meals per day.

To volunteer, donate and/or advocate, visit midohiofoodbank.org
Posted by Bob Ignizio at 12:00 AM