[THE GREAT BEAUTY opens in Cleveland on Friday February 21st exclusively at the Capitol Theatre.] 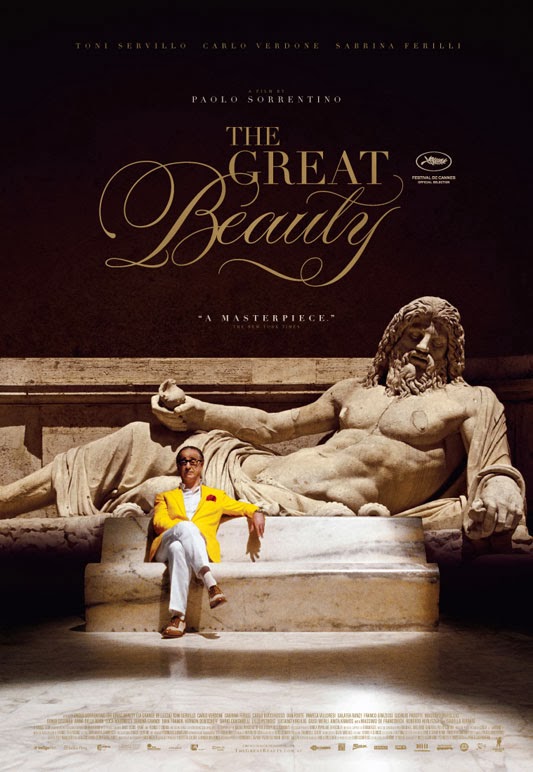 If Marcello Mastroianni’s paparazzi journalist from LA DOLCE VITA was still alive and kicking--and grew up to look like an Italian Joe Biden--he’d probably be Jep Gambardella (Biden doppelganger Toni Servillo), the semi-jaundiced protagonist of Paolo (2008 Cannes Grand Jury Prize winner IL DIVO) Sorrentino’s glorious THE GREAT BEAUTY. Along with Matteo Garrone (GOMORRAH), Sorrentino is one of the leading lights of the new Italian cinema. Best Foreign Film Oscar nominee BEAUTY could be his most accomplished work to date. It deserves to earn Sorrentino the U.S. arthouse following that eluded him with previous movies like 2012’s wonderful THIS MUST BE THE PLACE which fell victim to one of the Weinstein Company’s typical hit-and-run releases.

Impressionistic in the best tradition of Federico Fellini, Sorrentino creates a vivid, throbbing, frequently surreal portrait of contemporary Rome the same way Fellini did 50-plus years ago. (Sorrentino has cited LA DOLCE VITA and FELLINI’S ROMA as key influences in the making of BEAUTY.) And Servillo’s Jep is endowed with the same streak of romantic cynicism/fatalism that made Mastroianni’s characters in DOLCE VITA and 8 1/2 so iconic to previous generations.

There’s also a soupcon of (Marcel) Proust in the way that Jep catalogues the minutiae of quotidian life, present and (mostly) past. “What’s wrong with feeling nostalgic? It’s the only distraction left for those who’ve no faith in the future,” Jep opines at one point in the movie. In taking an inventory of his life and times, Jep--vis-a-vis Proust’s Charles Swann--searches for his elusive Madeleine. “Remembrance of Things Past” indeed.

Jep has been living on the success of his first and only novel, “The Human Apparatus,” published 40 years earlier and hailed by critics as a masterpiece. Although the odd, increasingly infrequent journalism job (just barely) pays the bills, Jep’s early fame insures him a standing invitation to the city’s most exclusive parties. Like many self-absorbed intellectuals, he also dwells on the past--particularly the grand amour he lost once upon a time. When he learns of his lost love’s recent death (her widower breaks the news to him), Jep’s already precarious existence goes into an emotional tailspin.

THE GREAT BEAUTY opens with Jep celebrating his 65th birthday. Sorrentino--and Jep-- spend the rest of the film explaining how he got there, what it all means and whether he still has any joie de vivre left in his rusty arsenal. Rediscovering his love of the city he claimed as his own as a young man--a city he’s grown steadily disenchanted with over the years--might hold the key.

Leisurely paced and densely novelistic in texture, Sorrentino’s magnum opus is funny, touching and ultimately quite profound in what it has to say about the measure of one man or any man’s life. Jep, unforgettably embodied by the twinkly-eyed, craggy-faced Servillo, is one of the great movie characters of recent vintage. He deserves to become as emblematic and revered a symbol of 21st century arthouse cinema as Mastroianni’s Fellini archetypes were to the 1960’s. 4 out of 4 stars.