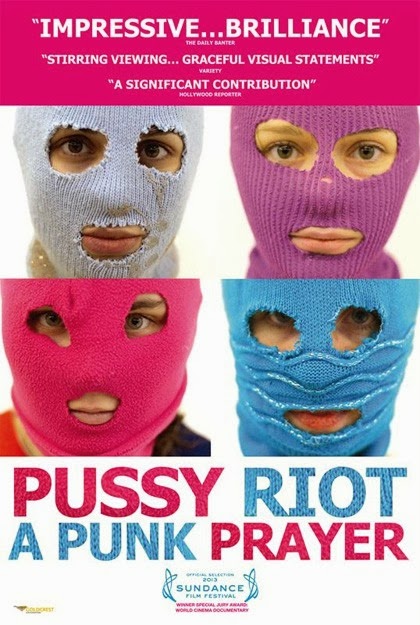 Even in the most tolerant of western democracies, if a group of people were to storm into a church wearing balaclavas and start doing a punk rock performance art piece, chances are there would be some repercussions: an arrest, a fine, some sort of light sentence like public service. Protesting outside the accepted avenues can be effective, but it comes with a price, and protesters generally understand and accept this. Getting sentenced to two years in a penal colony, however, seems a little harsh. Nonetheless, that's what happened to 3 members of the Russian protest group Pussy Riot.

For those who have only heard the barest details of the case, like this reviewer, PUSSY RIOT: A PUNK PRAYER gives a good overview of the various issues and persons involved. It does this primarily through use of previously aired footage of the group, and through interviews with friends, family, and adversaries. In this way, one gets a pretty good idea of what Pussy Riot was trying to say with their protest (objecting to the ways in which the Orthodox Church has become intertwined with Vladimir Putin's government), as well as the somewhat different interpretation many in the church took away (that the protest was directed at their beliefs, something which is very much a sore spot in a country that not so long ago had torn down the very church where the protests took place, and in which religious believers were often persecuted by the Communist state).

The three women arrested remind one of sixties radicals in America. They're serious about their cause, but often unsophisticated in the ways they pursue it, and naïve about the costs. Obviously they wanted their protest to get attention, but they clearly got more than they bargained for. Regardless, the women stay strong throughout their trial, trying to explain the nuances of what they were trying to do to a Russian justice system that has no interest in hearing their side of the story.

One wishes the filmmakers had been able to interview the members of Pussy Riot themselves. One could also argue that perhaps the film should have waited a little bit longer to see the story through to it's conclusion, or at least included a postscript telling what happened once all the members were finally released. There also appears to have been some internal drama within the group involving the boyfriend of one member which perhaps should have been included. Still, what's here is probably enough to give most viewers a fair idea what the controversy was all about and how it played out. The film was on the short list for this year's “Best Documentary Feature Film” Oscar but didn't make the final cut. While I did like PUSSY RIOT: A PUNK PRAYER, I have to say it was the right call not to include it in the nominees. 3 out of 4 stars.
Posted by Bob Ignizio at 12:00 AM