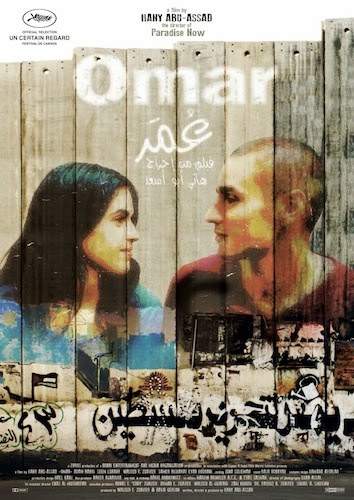 Omar (Adam Bakri) is a young man in love in Palestine. The object of his affections, Nadia, is the sister of his best friend Tarek. Not knowing how his friend would feel about this, Omar keeps his meetings with his love a secret, waiting for the right time to ask permission to wed the girl. But concerns about familial acceptance are by no means the greatest obstacle to Omar's love.


In order to see Nadia, Omar must hop over the Israeli West Bank separation wall. Getting over isn't the hard part, though. It's avoiding the patrols on either side.

This and other aspects of the Israeli occupation take their toll, both physical and psychological, on Omar and his friends. Tarek in particular is determined to fight back, and along with Omar and another friend, Amjad (Samer Bisharat), he sets out to do just that. So late one night, Omar steals a car and, acting on Tarek's plan, the three young men creep through the woods until they are within sight of an Israeli guard post. Amjad, in what amounts to an initiation into the resistance, shoots a guard.

Later, Israeli forces come after the three and manage to capture Omar. Under interrogation, his feelings for Nadia are used to make him give up the shooter. If he cooperates, he will be a traitor, and forever under the threat of being used by his oppressors again, lest they reveal his betrayal. If he says nothing, he will be face a stiff sentence for his part in the violence, making a life with Nadia impossible. Omar seemingly opts for the first option, but isn't entirely honest with his captors. We're not sure what he will ultimately do, but as paranoia mounts and other betrayals are reveals, one thing is certain: no matter what Omar does, he's screwed.

OMAR is unapologetically told from a Palestinian point of view in which the Israeli's are the oppressors. If you have a problem with exploring that viewpoint, then this is not the movie for you. If you're a little more flexible, then you can see that regardless of what side of the issue you might be on, for a young Palestinian like Omar, this is his reality. One can talk in abstract terms about where the borders should be, and whether the wall Israel has built is justified or not (according to international law, it's not), but on the personal level, it's not difficult to put oneself in Omar's shoes and see the impossibility of the choices available to him. 4 out of 4 stars.
Posted by Bob Ignizio at 12:00 AM