My Brother The Devil (now on video)

[MY BROTHER THE DEVIL is now available on home video.] 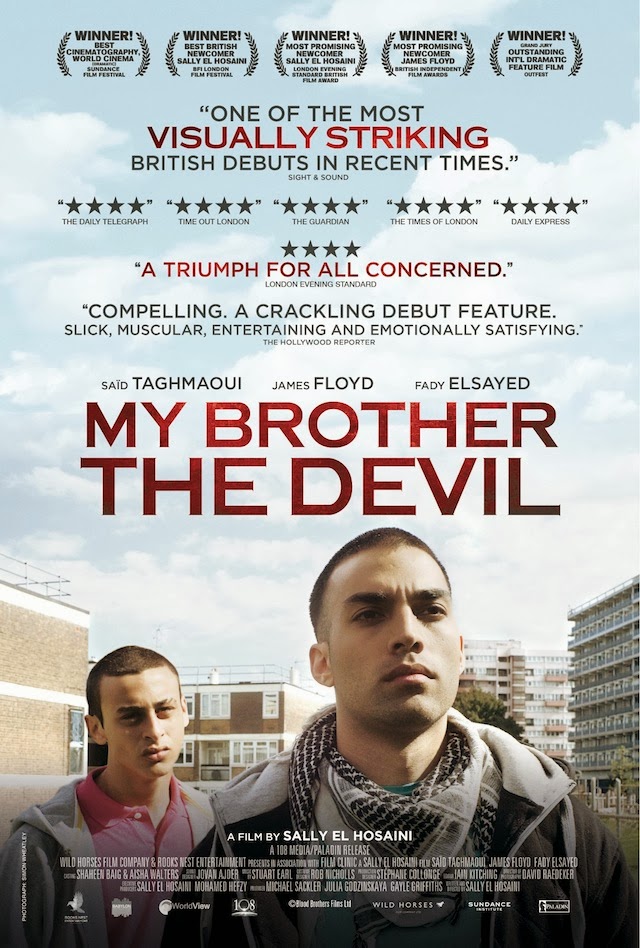 Don’t let the two-line plot summaries of Sally El Hosaini’s debut film MY BROTHER THE DEVIL dissuade you from watching. I get it… A young inner-city gang member scrabbling to support his working-class family while futilely trying to keep his street-bound little bro away from the lifestyle. You’ve seen it before.

By the time we meet Rashid (James Floyd), a second-generation Egyptian immigrant living in east London tenement housing with his parents and younger brother, Mo (Fady Elsayed), he’s already a mid-level dealer for a gang called DMG (Drugs, Money, Guns… hey, they ain’t called bangers cuz they're subtle). With his loyalties torn between the gang and his family, Rash is reluctant when fellow DMGers recruit Mo as a dope runner, but begrudgingly submits. Everything goes horribly wrong during a showdown with a rival gang – a sequence that occurs refreshingly early on in the film.

It’s the ensuing 80 minutes that place MY BROTHER a cut above the forty-chugging, bass-thumping, bullet-riddled superficiality of other pop cultural portrayals of urban life, as Hosaini persistently explores not just the competing external influences tugging at the impoverished youth, but also the internal volatility of the maturing - and competing - ethnic, spiritual and sexual identities that roil within them.

Shaken by the eruption of gang violence, Rash lucks into a job with one of his former buyers, Sayyid (AMERICAN HUSTLE’s Saïd Taghmaoui), a photographer and fellow Muslim who urges him to reconnect with this faith and reassess his identity. Mo, meanwhile, continues on with DMG, who are none too pleased by Rash’s abrupt departure.

Discussing the art of photography, Sayyid tells Rash that it’s all about where you “put the frame,” a point he drives home by showing that one of his gallery pieces - a close-up of a man and a woman embracing - was cropped from a longer shot of police arresting the man. Like many images in the film, it’s both stirringly effective and a little heavy-handed.

More importantly, though, it perfectly captures the visual spirit of Hosaini’s direction, which marries the gritty realism of fellow UK verite filmmakers, like Ken Loach and Andrea Arnold, with the polished composition and deft camera moves of an American studio production. She uses the camera to recontextualize urban characters within their surroundings in the hope of capturing, in a series of still photographs set in motion, the essence of their humanity.

While this should be the goal of all character-driven storytelling, it’s rare to see it realized so earnestly and skillfully, certainly by a first-time director. It's also what makes the events of BROTHER’s final hour so unexpected and compelling – the story is shaped as much by the reckless fear and passion of Rash and Mo as it is by the dictates of contemporary screenwriting. In short, there are as many surprising revelations as there are predictable outcomes.

But then, the same could be said of real life.

In one of MY BROTHER THE DEVIL’s most joyful and subdued scenes, Mo’s friend is waving a fluorescing sparkler through air, the blinding magnesium embers raining down as the thick beat of a hip-hop track rattles the night. The music abruptly halts as the sparkler dies, plunging the frame into silent dark.

Watching the end of the film, I thought for a moment that the resolution was a bit too pat… maybe even a bit too happy. But then I thought back to the above moment, and to several scenes of brutal violence in the film. Hosaini is plenty willing to acknowledge how quickly life can be extinguished – it just seems she’d rather focus on how brightly it can burn. (3 out of 4 Stars)
Posted by Matt Finley at 12:01 AM