[LIKE FATHER, LIKE SON opens in Cleveland on Friday February 14th exclusively at the Cedar Lee Theatre.] 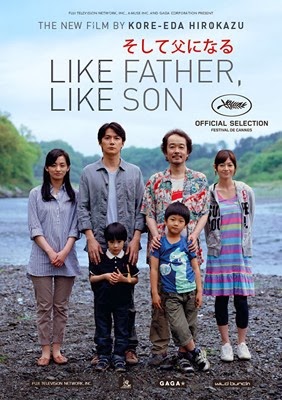 At one time or another, especially during the hell of adolescence, nearly everyone imagines they were accidentally (or was it deliberately?) switched at birth. While the other infant grew up to live a grand, privileged life, you were cruelly, unfairly stuck with impostor parents who didn’t understand you because, well, how could they?

The whole “switched-at-birth” template has been used as the basis of countless soapy Lifetime movies, but nobody has really done this tantalizing premise justice until now. Hirokazu Kore-eda’s LIKE FATHER, LIKE SON, winner of the Jury Prize at last year’s Cannes Film Festival, replaces cheap sentimentality and low-rent melodrama with formal rigor, compassion and a clear-eyed insight into familial dynamics.

It was 2004’s NOBODY KNOWS that turned me into a Kore-eda fan. (I wasn’t crazy about his overpraised 1999 arthouse sleeper AFTER LIFE.) Based on a true story about four young children--the oldest was 12-years-old--abandoned by their mother in a Tokyo apartment and left to fend for themselves, NOBODY was a humanist masterpiece that revealed Kore-eda as an heir-apparent to the late Francois Truffaut. Like Truffaut (SMALL CHANGE) and Steven Spielberg (E.T.: THE EXTRA-TERRESTRIAL), Kore-eda is that rare filmmaker who never forgot what it was like to be a kid. Chronicling the joys and occasional terrors of childhood seemed to be his great, natural subject. In subsequent gems like I WISH and STILL WALKING, Kore-eda continued his examination of family life and the damage myopic parents can sometimes do without even realizing it.

The two families at the center of LIKE FATHER couldn’t be more different. Ryota (Masaharu Fukuyama) and Midorino (Machiko Ono) are high-strung yuppies passing their workaholic ethos onto their only child Keita (Keita Ninomiya). The lower middle-class Yukari (Yoko Maki) and Yudai (Lily Franky) have a considerably more laid back approach to both parenting and life in general. (If this was a Hollywood movie, they’d probably be ex-hippies.) Ryuesi (Shogen Hwang), their bright-eyed eldest child, is as boisterous and fun-loving as Keita is solemn and withdrawn.

When the hospital drops the bombshell--an emotionally unstable nurse was the culprit--the repercussions are seismic for the parents as well as the two boys. Do they swap kids and just hope for the best? Or would it be better to take things more slowly--e.g., the occasional weekend “visit” for parents and sons to get better acquainted? (Ryota tells Keita to think of his overnight play dates as “a mission for you to get stronger and grow up.”)

It’s a frankly impossible situation, one that requires the wisdom (and refereeing skills) of King Solomon. Like the characters themselves, we have no idea how any of this is going to turn out. In his own deliberate, contemplative way, Kore-eda--a true master of purposeful indirection--makes this dual family trauma the stuff of an old-fashioned nail-biter.

LIKE FATHER, LIKE SON ultimately boils down to that age-old “nurture versus nature” argument. Is parenthood strictly a matter of genetics? Or is it the amount of time a parent spends with a child during their formative years that matters most?

As good as the performances are by the adult actors (singer-songwriter Fukuyama is especially good), the film is stolen by Ninomiya and Hwang’s wonderfully unaffected, naturalistic turns. There’s not a single false moment from either youngster, or Kore-eda for that matter. You don’t need to be a parent to love this quietly devastating heartbreaker of a movie, just human. 4 out of 4 stars.