[IN SECRET opens in Cleveland on Friday February 21st exclusively at the Cedar Lee Theatre.] 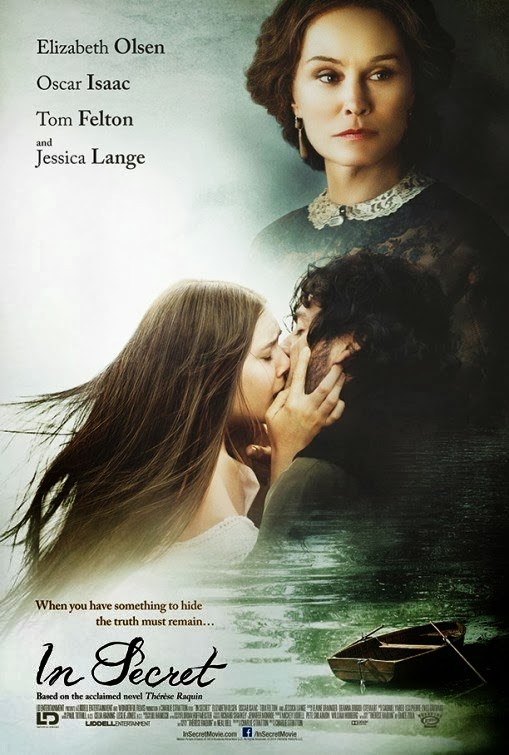 Although set in late 1800s France, it would be fairly easy to rework IN SECRET (based on the novel Thérèse Raquin by Emille Zola) for contemporary times with just a little tweaking. Granted, people these days aren't likely to wind up in arranged marriages to their first cousins, but aside from small details like that the basic story is timeless: A pretty young woman stuck in a loveless marriage to an unpleasant schlub finds solace in the arms of the far more attractive friend of her husband. Inevitably the lovers plot do away with the man standing in the way of their happiness, but as they learn, murder seldom has a happy ending.

IN SECRET begins in almost Dickensian fashion as Therese (Elizabeth Olsen) is sent to live with her Aunt, the Madame Raquin (Jessica Lange) and sickly cousin Camille (Tom Felton) in their gloomy, joyless home. Even sunny outdoor scenes have a gray cast to them, and the future looms even darker for Therese when she learns that she is to be married off to her Camille.

After the wedding, the family moves to Paris where Camille has secured a job and a dwelling where Therese and Madame set up shop in a parlor even gloomier than their previous abode. But then one evening a ray of light comes into Therese's world in the form of Laurent (Oscar Isaac), and old family friend Camille brings home one night after learning they work at the same office.

Larent is an artist with a rough manner, a 19th century “bad boy” if ever there was one, and Therese barely hesitates before jumping headlong into an affair with him. For a time the two are happy, but when it becomes more difficult to arrange their surreptitious liaisons, the lovers begin thinking up more drastic ways to be together. And to be honest, it's kind of hard not to be on their side, at least a little bit.

Felton's Camille is just as insufferable as his Draco Malfoy in the HARRY POTTER films, albeit in a more whiny and less overtly evil manner. And then there's the Madame always lurking about like a vindictive spectre. She could just as easily be one of the villainous yet self righteous characters Lange plays on American Horror Story. So when Therese and Laurent resolve to murder Camille and make it look like an accident, we may not condone their act, but we can understand it

While there is some aspect of the cat and mouse game most thrillers of this sort turn into after the crime has been committed, what IN SECRET is mainly concerned with is the psychological and emotional impact of the killing on Therese and Laurent. The bright new future the couple hoped for seems doomed to turn into one filled with misery and horror instead as guilt and fear consume them, destroying their passion and love for each other.

Olsen runs quite the emotional gamut as Therese, starting out as the poor put upon victim, transforming into an enraptured lover, showing ambivalence about such a permanent solution to the problem of Camille, and then descending into paranoia and despair. Isaac's character doesn't get to experience quite the same range, but he does a good job playing a charismatic scoundrel whose downfall is falling in love.

Actor turned director Charlie Stratton has only helmed a few TV episodes prior to this, but he comes across as a strong and assured filmmaker with his debut feature. He has a firm vision for how he wants his film to look and feel, and sticks with it even if it might be a bit too grim for some. 3 out of 4 stars.
Posted by Bob Ignizio at 12:01 AM