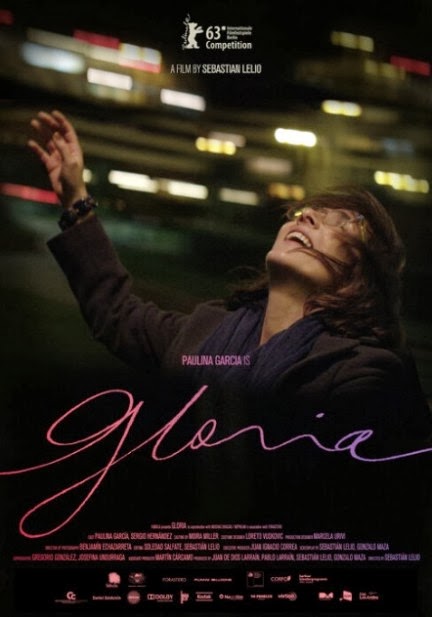 Gloria, the eponymous fiftyish divorcée who is the subject of GLORIA, is a rare thing in the movies — a free-spirited older woman confident in her sexuality. And the film, which was Chile's entry in the Academy Awards this year, is unabashed, and unusually explicit, in its portrayal of sex between older people.


The film is less plot-driven than a character study, in which the camera rarely leaves the face of Gloria (Pauline Garcia), an attractive Santiago woman whose oversized glasses confer a strange resemblance to Dustin Hoffman's Tootsie. Ten years divorced, Gloria has two adult children and a baby grandson. She has a lust for life, as well as sex, and is game for anything new, whether it's bungee jumping or paintball battles. She loves music and dancing, singing along to pop songs on her car radio and attending dances at a singles' club, where one night she meets Rodolfo (Sergio Hernandez ). There's an immediate attraction, and they begin a passionate relationship.

Unfortunately, Rodolfo, who is recently divorced, hasn't been able to untie himself from his ridiculously dependent adult daughters. He is constantly fielding their phone calls and rushing to their aid. Although Rodolfo professes his love and passion for Gloria, he has a disturbing habit of walking out, once during a dinner with Gloria's ex-husband, son and daughter, and again during a vacation at a casino resort.


Gloria's life in her apartment is plagued by the demented ravings of her disturbed upstairs neighbor and the intrusion of his ghastly hairless cat, which keeps entering her apartment (how the cat gets in is never explained). One night, the crazy neighbor drops a packet of marijuana outside her door, and pretty soon Gloria is regularly smoking joints. We accompany Gloria in her daily activities: working at her job, driving her daughter to the airport, visiting the eye doctor, who tells her she has glaucoma. None of these quotidian activities has any apparent narrative significance, except to say, “This is Gloria.”

Ms. Garcia is an appealing heroine, but director and co-screenwriter Sebastian Lelio relies too much on her charisma to carry the film. There are some warm and amusing scenes, but the script reveals little about Gloria's motivations; long dialogue-free stretches require the viewer to fill in the blanks. Why, for example, after henpecked Rodolfo has walked out on her family dinner, does Gloria agree to date him again? Garcia's expressive, naturalistic acting, which gives the film what charm it has, is deserving of a sturdier vehicle. 2 3/4 out of 4 stars.
Posted by Pamela Zoslov at 12:00 AM