It's Valentine's - for my money, the only holiday that truly deserves a slasher-movie franchise. No kidding, why the hell do homosexuals want the right to get married? I thought their suicide rate was excessively high as it is.

It's also the week that Cleveland's own, venerable SCENE Magazine, for which I once wrote, back when they had more page space, puts together a cheeky annual "lust" issue, in which Clevelanders recount their erotic/romantic adventures (in other words, lie).

I think I finally figured why SCENE does this schlocky tradition. It often gives an excuse to hire some glamour models for the cover and interiors. And thus constitutes the one time a year that the editors get to meet a pretty girl in the actual magazine offices (the ones in the phone-sex ads in the back are stock images from out of town, I would guess, given the Pacific Ocean and Miami Gold Coast in the photo backgrounds). Couldn't get that fringe benefit without a "lust" issue, right?

Here's how I imagine the encounter goes:

MODEL: Hey, did you just touch my boob?!

EDITOR: Sorry, I, uh, thought I saw a bedbug. Had to brush it off before it laid eggs in your (BEGINS STUTTERING) w-w-warm s-s-s-oft wom-m-m-anish b-b-b-bosom flesh-h-h-h. Downtown Cleveland's infested with them, you know. Bedbugs, I mean.

MODEL: You ain't one of them writers, are you? 'Cause they're all gross geeks. And gay, I bet. I'd scream my head off if one laid a finger on me.

EDITOR: No, no, I'm not a journalist in any form! Heck no!

MODEL: Then whad'ya doing here in this newspaper place?

EDITOR: I'm a...drug dealer. That's right! I sell drugs to all the downtown offices. Drugs and concert tickets. And sportscars!

MODEL: OMFG! You are the dream man I've waited for all my life! Take me now! Now on this desk! Impregnate me so's I can go on Teen Mom!

EDITOR: (THINKS TO SELF) Thank you, Cleveland alternative media and annual "lust" issue!


...As you can tell, when it comes to Valentine's Day, after certain life experiences, I am not a fan.


So, what is my recommended romantic viewing for you and your sweetheart this sacred holiday? Something like, oh, the Italian "mondo" movie (that exists only in my mind), WOMEN BEING TORTURED AND EXECUTED AROUND THE WORLD, perhaps? 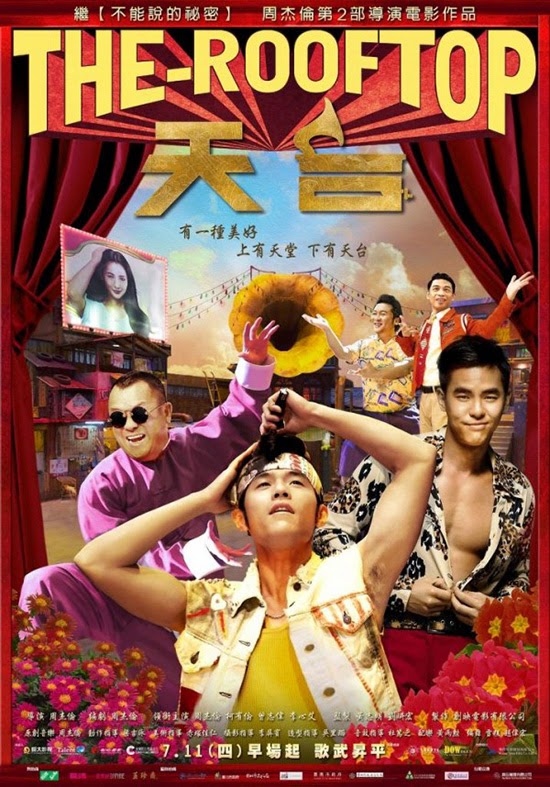 Surprisingly not. The romantic novelty feature that melted even my cynicism, softened even my scars, slightly, was THE ROOFTOP, a Chinese action-comedy-musical-romance. Which I understand is indeed something one does not see every day.

Here dwell a bunch of benign ne'er-do-wells living on Rooftop, the city's high-rise poor quarter (dominated by a giant, full-functioning gramophone). Wax (Chou) is a friendly street-fighter type among these slackers and bowling enthusiasts (most of whom are named after food), and it's thanks in part to his muscle that the gang land a lucrative gig collecting "rent" for the gangster-like Central Housing Authority.

Wax has a secret crush on Starling (Hsin Ai Lee), an aristocratic beauty currently a ubiquitous ad model. Starling happens to in the process of being groomed for movie stardom, and while collecting "rent," Wax stumbles across Starling's film shoot. His impromptu kung fu gets him cast as the stunt double for Starling's nasty leading man. Furthermore, Starling's career is being secretly guided by crooked types connected to the Housing Authority. Can love blossom between the hooligan and the high-born maiden?

True, the A to B plot and characters don't exactly break any fresh ground - except I understand it's almost unknown for home-soil Asian stars to break out into song and dance regularly like this. But as pure date-movie crowd-pleaser, THE ROOFTOP is one wildly entertaining, eye-filling diversion. Elements of Cantonese chopsocky potboilers, Indian "Bollywood" epics (a good comparison, I think) and MGM Technicolor spectacle, all agreeably stir-fry together under young Mr. Chou's firm hand. It seems he's been making his own movies for a while, now, and working on THE GREEN HORNET filled out his own education on how to stage a blockbuster. Why THE ROOFTOP isn't better known in this country I cannot say.

I tell you, the Chinese own the 21st century. Maybe I can blame them somehow for Valentine's Day.

In the meantime, however, for those of you also planning to spend February 14 ROOFTOP-less, dwelling in the agony of your own heartbreak, loneliness and regret, I give you a clip of what WOMEN BEING TORTURED AND EXECUTED AROUND THE WORLD might have looked like (it's actually Lois Lane in peril from an old Superman cartoon, but feel free to mentally paste a portrait of your ex)...