Cleveland schlocks! At SchlockFest in the Flats, March 1 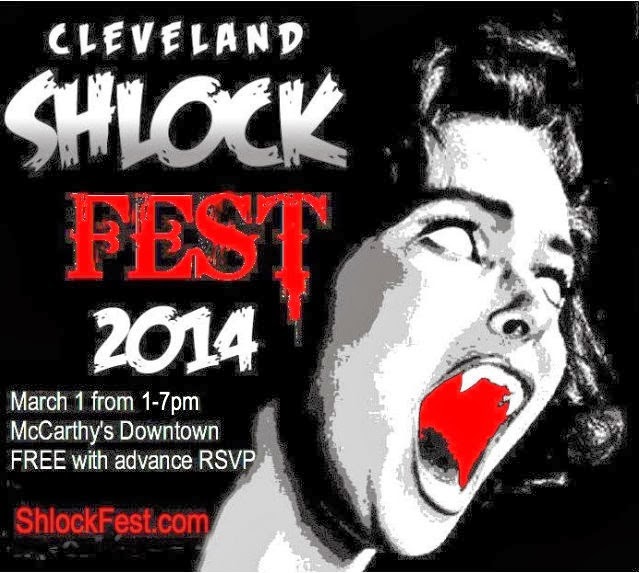 Ever since LeBron James left, the only thing significant about Cleveland, we can all agree, are a new series of local-interest expos/conventions bravely launched by upstart Land of Cleve Productions. The group put on the first-ever CleveCon 2014 earlier this year, hosting in a variety of guests from realms of NE Ohio music, sports, literature and popular culture.

Scheduled over the next several months are specialty 'cons,' all held at McCarthy's Alehouse in the Flats. These bid to bring Cleveland waterfront bar-crawlers of 2014 eye-to-bloodshot eye with local mystery writers and Whovians (at SherlockCon), local music acts and collectors (TuneCon), local authors in all genres (BookCon), local comics (Cleveland ComicCon), etc. But if one must choose one con to attend that just about sums up area culture, before Land of Cleve becomes so successful the organization relocates to South Beach, San Jose or Baltimore (such has happened before, let's face it), the place to be is SchlockFest, on Saturday, March 1, from 2:30 p.m. to 7 p.m.

This is a celebration of, well, schlock: exploitation cinema, regional-TV late-nite horror hosts, DIY backyard filmmaking, cut-rate sci-fi and whatever else comes to mind whenone thinks of Ghoulardi, the Ghoul, Superhost, Big Chuck and his partners, or other immortals of the Cleveland media landscape. Just think, if LeBron had stayed home and watched those shows like the rest of us did, instead of practicing hoops and developing the mad skillz that have made him the Greatest Pro Athlete in the World, he might still be living around here today. Of course, he'd probably be a pale, skinny, utter unknown, either jobless or earning minimum wage - but he'd still be here. So do not underestimate the power of schlock.

The day will include screenings of grassroots productions and cult classics, memorabilia vendors, a horror-host panel, live cable/internet TV tapings, and a movie shoot for THE SCAVENGERS, described asa "Stan Leee" spoof-in-progress about a team-up of superheroes and spies saving "Cleveburgh" from painful sports losses.

Admission to SchlockFest is $5 at the door, with discounts and even free admissions available if one RSVPs in timely fashion via the website www.landofcleve.net. McCarthy's
is on the West Bank of the Flats, at 1231 Main Avenue.