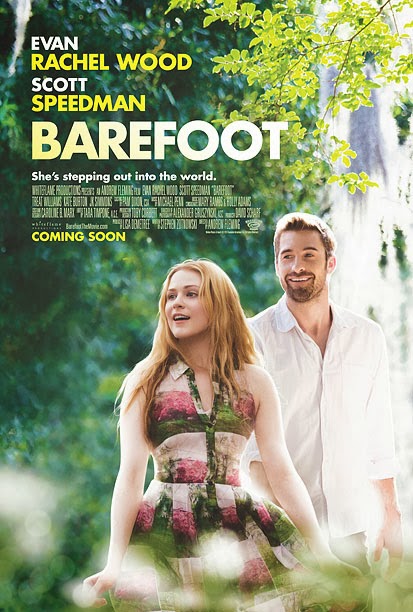 Here we have yet another example of the “manic pixie dream girl” movie. To save you the trouble of looking it up on TV Tropes.com or Wikipediea, the MPDG movie is one in which a vivacious, childlike woman with no inner life or goals of her own teaches a tough, cynical, but good at heart guy important life lessons about how to live, love and be a better person.

In BAREFOOT the guy is Jay (Scott Speedman), the black sheep of a wealthy family. A janitor at a mental health facility, Jay is currently on parole and on the run from a loan shark. While on the job he meets Daisy (Evan Rachel Wood), a new patient who has led an extremely sheltered life thanks to her controlling mother. Mom has recently passed away leaving Daisy in a state of shock, but even at her best Daisy can barely function in the real world. In classic MPDG fashion she acts more like a child than the adult woman she is. And, you guessed it, she tends to traipse around sans footwear.

Looking for a way to pay his debts, Jay takes the suggestion of one of his co-workers to attend his brother's wedding. The theory is, Dad will be in such good spirits that tensions will subside and checks will be written. The problem is, Jay has lied to his parents to make his life sound better, even inventing a fake nurse girlfriend for himself. Now his parents expect him to bring this nonexistent woman as his date for the wedding.

As luck would have it, though, Jay crosses paths with Daisy just as she is trying to escape from the mental hospital. You can see where this is going, right? And probably quicker than Jay, who first stops at his favorite strip club, Daisy in tow, to see if one of the girls there will take the wedding escort gig. Really, it's just an excuse for some tired fish out of water hijinks as Daisy tries to grasp the whole strip club concept. It also sets up future awkward situations by having Jay steal a bunch of stripper clothes for Daisy to wear while they stay with his rich family.

Daisy initially wins over Jay's parents, but inevitably things go south and the deception is exposed. After that, the unlikely couple embarks on a road trip back home, experiencing the usual rom com ups and downs and misunderstandings along the way. Any resemblance to any actual relationship in the history of human beings is purely coincidental.

On a technical level the filmmaking is fine. Andrew Fleming (DICK, THE CRAFT) is a reliable work for hire director who at least makes sure the actors hit their marks, everything looks good, and the plot moves along at a reasonable pace. The cast is solid, too, doing their best to make annoyingly written stock characters come to life. The main problem lies with the screenplay, credited to Stephen Zotnowski and based on his story of the same name (previously adapted as a 2005 German film of the same name). One has to imagine the script was written with the intent of being cute and quirky rather than idiotic and grating, but hey, things don't always go as planned. 2 out of 4 stars.
Posted by Bob Ignizio at 12:01 AM