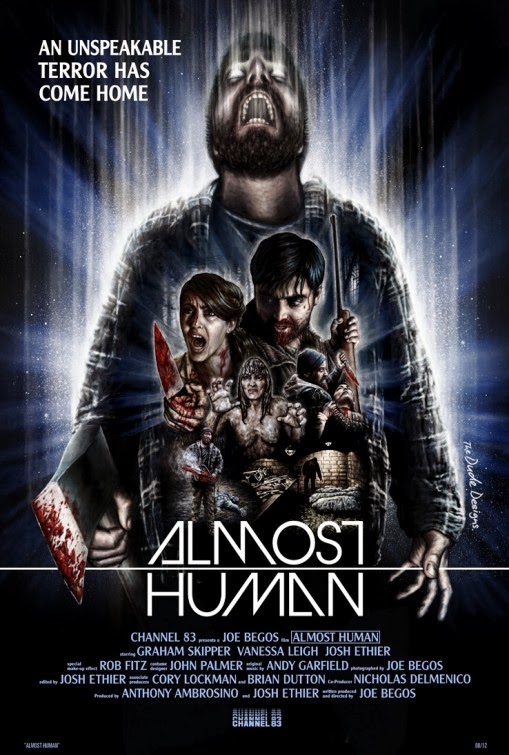 Although the basic plot of ALMOST HUMAN borrows major elements from INVASION OF THE BODY SNATCHERS, THE HIDDEN, SLITHER, and other films in which alien invaders take over or make over human beings, what the film really reminds me of are the low budget sci-fi/horror films of the late Don Dohler (NIGHTBEAST, THE ALIEN FACTOR, etc.). Dohler was a Maryland based filmmaker who, despite limited resources, always made an effort to produce genre films that were as good as he was capable of making. That's definitely the spirit in which writer/producer/director Joe Begos seems to be working in ALMOST HUMAN, and for that alone I have to give him some respect.

The film begins in 1987 when Mark (Josh Ethier) was abducted by aliens. Mark's girlfriend Jen (Vanessa Leigh) and his friend Seth (Graham Skipper) were both present while this took place, but Seth was the only one who actually saw what happened. Jen doesn't buy the alien story, and even goes so far as to tell the police she things Seth is responsible. Seth is eventually cleared, but his life never really gets back to normal.

Two years later, Seth is starting to have strange dreams which he interprets as premonitions that Mark will be returning soon. He tries to warn Jen, but even though she doesn't blame Seth for Mark's disappearance anymore, she still thinks he's looney tunes with all the space alien talk. As it turns out, though, Seth is correct. Mark has returned. Or at least something that looks like Mark, talks like Mark, and seems to have Mark's memories. The difference is, this Mark is considerably more homicidal. As the body count rises, Seth realizes it's up to him to stop his former friend's bloody rampage.

By low budget genre film standards ALMOST HUMAN is pretty solid. The actors seem to have some experience, the dialogue mostly sounds like words actual human beings would utter, the camerawork and editing are competent, and the film manages to be fun without being campy, offering up plenty of action, gore, and weird alien appendages.

That's all well and good and admirable, but not quite enough to overcome some of the film's shortcomings. Begos doesn't do much to freshen up his overly familiar plot, and despite clocking in at a mere 80 minutes the film still drags in spots. Still, it's no worse than any number of late seventies/early eighties drive-in flicks that genre fans of my generation have fond memories of, and if that's the kind of thing you're looking for, you'll probably get a kick out of this. 2 1/2 out of 4 stars.
Posted by Bob Ignizio at 12:23 AM