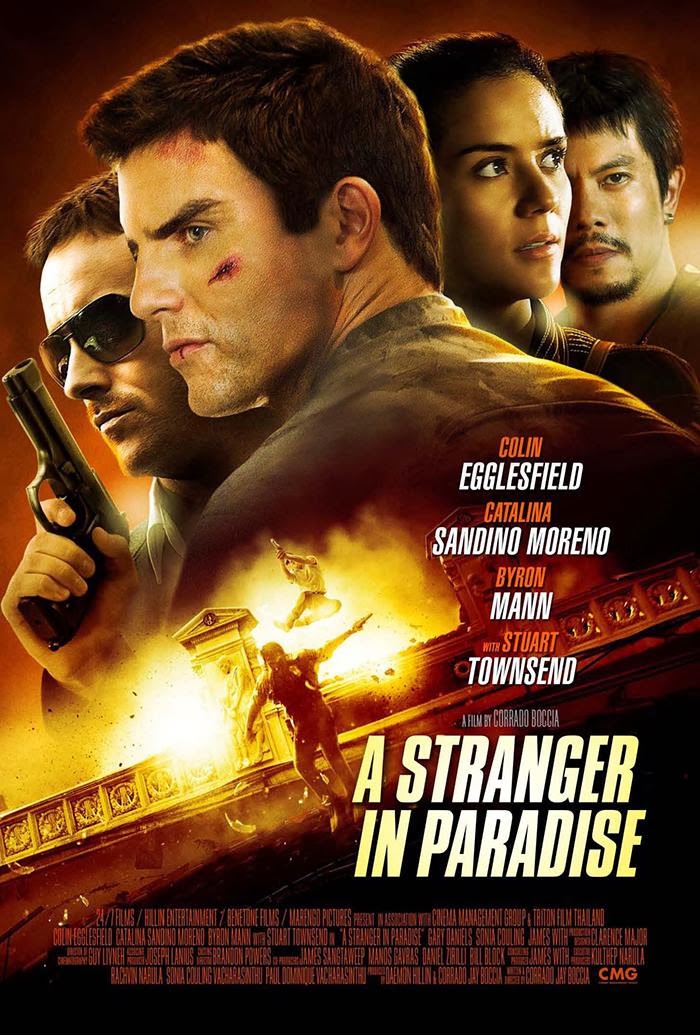 Shot entirely in Thailand, A STRANGER IN PARADISE is a dramatic thriller set against a backdrop of organized crime and vibrant nightlife. The plot has investment banker Josh (Colin Egglesfield) being sent to Bangkok on a forced vacation by his boss, a former classmate of his brother Paul (Stuart Townsend).

Paul runs a nightclub that caters to some of the shadier characters in town. He considers himself to be immune from any trouble, seeing his club as neutral territory. That doesn't matter much to Lek (Byron Mann), a gang member who shows up at the club trying to shake Paul down.

When Josh arrives in Thailand he brings with him an old high school yearbook given to him by his boss as a present for Paul. Unbeknownst to the two brothers, the book contains codes detailing the location of various illicit funds. Surprised to find his brother has arrived so soon, Paul sends his female bodyguard Jules (Catalina Sandino Moreno) to pick his brother up at the airport, while his other retainer Derek (Gary Daniels) explains to Lek that it isn't polite to threaten people in their own business establishments.

From this point on, various factions including Lek's gang, corrupt members of the Thai police force, and a couple of American justice department officials are all chasing after Josh and Paul trying to get their hands on the yearbook and the codes it contains. In theory, much action should ensue, but that proves not to be the case. Although it's a fairly solid production by low budget movie standards (evidently it was made for around $3,000,000), STRANGER never quite comes to life.

Given the level of material director/co-writer Corrado Boccia is working with here, a little more in the way of action would have gone a long way to compensate for the formulaic plot. Shoot an extra car chase, add in a fight or two, maybe redo the scene where Josh sleeps with two attractive prostitutes so that we actually see a little bit of sex and nudity, and you'd have a serviceable “B” movie. In other words, there's nothing wrong with A STRANGER IN PARADISE that Roger Corman couldn't have fixed. But as it stands, the first two thirds of the film are largely bereft of action, and the brief and unimaginatively staged chases, fights, and shootings we do get feel perfunctory at best.

One gets the impression Boccia was trying for something more than just another low budget quickie with STRANGER. One can admire the ambition, but the result is a film that reaches beyond its grasp. It wants to be one of those movies with twists and turns where the lead character thinks his way out of trouble, maybe something along the lines of THE USUAL SUSPECTS given the “flashbacks from a police interrogation room” structure of the plot. The problem is, the script just isn't good enough or clever enough to succeed on that level. Not only is the plot fairly run of the mill, so are the characters who populate it. Moreno and Townsend at least have enough presence to hold our attention, but Egglesfield makes for a woefully bland protagonist.

STRANGER might work okay as a movie you discover on the shelf of your neighborhood video store (or nearest Red Box), or while browsing the titles on whatever streaming service you happen to use. Under those circumstances it might not only meet but exceed the usual expectations for low budget action fare. But this movie is being given a limited theatrical release, and it just isn't good enough to compete on the same level as the Hollywood fare showing on the other screens at the multiplex. Boccia is a competent filmmaker – this is no THE ROOM or FATEFUL FINDINGS. But in trying to keep his film somewhat classy and more focused on drama than action, it's like he's trying to beat the major studios at their own game. That's kind of like bringing a knife to a gunfight. 2 out of 4 stars.
Posted by Bob Ignizio at 12:00 AM