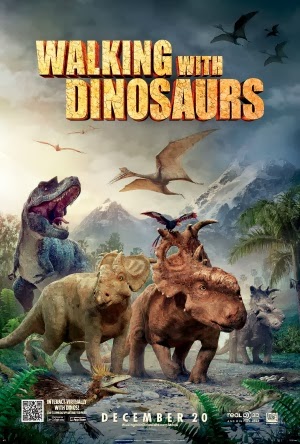 We were supposed to catch WALKING WITH DINOSAURS a couple weeks back, but an electronic throttle control problem with our Jeep conspired with a Saturday morning snowstorm to prevent our trek to the Richmond screening.  My son and I were finally able to catch a weekend matinee at Crocker while his sister checked out another title with her friends.  By the time this review posts, chances are WALKING will have vanished from theatres, not unlike the mass disappearance of the big lizards all those epochs ago.

Produced in part by BBC Earth (who created a similarly-titled documentary miniseries back in 1999) WALKING is the computer-animated tale of three dinos and their winged companion / mouthpiece struggling to survive over 70 million years ago in the wilderness that would become Alaska.

Our protagonists are three Pachyrhinosaurs, which—according to one of the onscreen info-graphics shown whenever a new species enters the fray—means “thick-nosed lizard.”  Physically, these beasties resemble the more familiar Triceratops, what with their low, squat bodies and armored frills surrounding their bony noggins.  We follow the life cycle of the unoriginally-named Patchy (voiced by Justin Long), his brother, Scowler (Skyler Stone), and up-for-grabs love interest Juniper (Tiya Sircar) from egg to adulthood as seasons come and go.

Patchy is the runt of a litter born to a watchful mama and protective papa, Bullduster.  He’s a cute little guy, but even his smothering parents can’t protect the curious cub from a hungry Troodon (a bird-like dino), whose toothy beak leaves Patchy with a wind-whistling hole in his frill.  It’s just the first of many scrapes he encounters while maturing in an unforgiving wilderness where each step is charged with fight-or-flight consequences.

Patchy learns fast about the wonders and perils of the big world around him as he ventures further from the nest.  The sibling rivalry between him and Scowler worsens after one parent succumbs to a ferocious carnivore and another goes missing in a forest fire.  Patchy takes comfort in the companionship of a plucky female named Juniper—but the strong, aggressive Scowler nearly poisons the romance as their herd migrates south for the winter.

Their story unfolds (not unlike the wings of the spindly, Pterodactyl-like Quetzalcoatlus) as related by goofy bird-lizard Alex (John Leguizamo) to a lethargic modern day human teen (Charlie Rowe) who’d rather play with his i-Thing than accompany his little sister and their paleontologist uncle (DREDD’s Karl Urban) to a dig—where he (gasp!) might learn something.  The discovery of an apparently enchanted Gorgosaur tooth prompts Alex’s prehistoric retrospective, with the bonds between the Pachys designed to stimulate kids’ interest in all things Paleolithic and Mesozoic.  The rooster-like version of “old” Alex serves both as Patchy’s conscious and our Greek chorus.  He also provides a little comic relief.

We’ve learned a lot about dinos in recent years, so the writers have added a lot of creatures toddlers haven’t seen before, especially bipedal critters with close physiological ties to today’s birds.  We meet the feathery Chirostenotes and small, hen-like Hesperonychus.  The marsupial rodent Alphadon looks and behaves like a skittish badger.  The principal villains—the flesh-eating Gorgos—are faster, ¾ scale T-Rexes.

But Patchy’s biggest enemy is himself.  He realizes Scowler boasts some distinct evolutionary advantages, but it takes a long time for our guy to assert himself.  Patchy begrudgingly surrenders herd leadership to his brother after Scowler head-butts the elder Major from the competition, but he doesn’t challenge his stubborn, overconfident sibling until he’s lost his girl and Scowler leaves him for dead.

Animal Logic’s computer-crafted feathers, scales, and eyes are a wonder to behold, but the nifty visuals wear thin halfway through.  There are just too many Cretaceous clichés and scenarios recycled from superior kid flick THE LAND BEFORE TIME, with dashes of drama borrowed from classic chaos caper JURASSIC PARK and Disney’s THE LION KING.  Leguizamo does his best to inject a few laughs, occasionally succeeding (the Gorgos’ tiny arms are cause for cracking up, and when Leguizamo loses it, so do we).  Alex informs us that Quetzals had no known predators, but then one of them swoops too low and is promptly snatched from the air by a hungry Gorgo.

Symbiosis is explained in a manner younger audiences can grasp.  We also learn the difference between herbivores, carnivores, and omnivores.  The ever-spinning circle of life is on full display here, but don’t worry, moms, there’s hardly any bloodshed.

I like some of the songs used in the film, even if their timing and appropriateness here will waft over kids’ heads.  Barry White’s “I’m Gonna Love You Just a Little More” plays as Patchy pines for Juniper, and Fleetwood Mac’s percussive, thumping “Tusk” accompanies a sequence wherein he and Juniper tag along with a pack of squat, elephantine dinos after becoming separated from their own herd.

We’re sure Nightingale and company meant well, but WALKING WITH DINOSAURS is anemic on all fronts, playing off like a PBS nature documentary that’s been dumbed-down (and sprinkled with poop jokes) to maintain kids’ interest.  But just because you’ve managed to not completely bore today’s ADHD youngsters doesn’t mean you’ve successfully engaged, enlightened, or moved them.

It’s worth renting at the Redbox for the little ones; my son liked it well enough.  But Little Foot and the gang did the same thing better a quarter-century ago.  2 out of 4 stars.