[THIS IS MARTIN BONNER screens Wednesday January 15th at 7:00 pm at the Cleveland Museum of Art.] 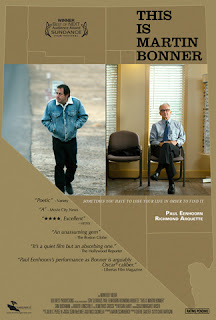 THIS IS MARTIN BONNER follows its titular character (Paul Eenhorn) as he starts a new job helping prisoners readjust to society when their sentences are up. Martin is doing a good bit of readjusting himself. Recently divorced, he lost his job as business manager for a church after going through a crisis of faith. He's had to file bankruptcy, and eventually had to move from Maryland to Reno, Nevada for his current job after two years of fruitless searching.

Martin's first client is Travis (Richmond Arquette), who hopes to get his life back on track and reconnect with his daughter after serving a 12 year sentence. Although Martin is merely supposed to drop Travis off with his assigned mentor, the devoutly religious Steve (Robert Longstreet), something clicks in the short time the two ride together. When Travis needs advice on some personal matters, he feels more comfortable talking to Martin. The two men slowly start to form a genuine friendship, sensing in each other kindred spirits. However, an act of deception by Travis threatens to undermine that friendship.

Writer/director Chad Hartigan may be telling a fairly simple story, but he and his cinematographer Sean McElwee make sure it remains visually interesting throughout. When it's not focused on the weathered countenances of its two leads, McElwee's camera captures nice little details of a Reno that looks very much lived in.The film ends a bit abruptly without resolving every issue in its protagonists' lives, but that feels about right.


Like its protagonist, there's nothing outwardly flashy about THIS IS MARTIN BONNER. It's just a quiet little character piece, but one with considerable emotional depth and authenticity. For some, it will seem as if nothing much happens in this movie. There's no romance, no fights or chases; just a couple of dudes hanging out and helping each other deal with their problems. Not every plot element is fully resolved by the time the film reaches its fairly abrupt ending, but that feels right. This is a film less concerned with plot than with getting inside its characters and seeing how they connect and affect each other, and how because of that they're in a different place mentally at the end of the movie than they were at the beginning. 3 out of 4 stars.
Posted by Bob Ignizio at 3:20 PM