The Square (January 17th and 18th at the Cleveland Cinematheque)

[THE SQAURE screens Friday January 17th at 9:25 pm and Saturday January 18th at 7:40 pm at the Cleveland Cinematheque.] 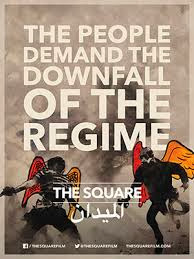 I've mentioned often (usually at end-of-the-year/best-of roundups) that I've tended to abandon mass-audience corporate cinema in favor of documentaries. Unlike nine-tenths of what dumb paranormal-teen book-series adaptations or blockbuster superhero franchises are opening at the multiplex this weekend, one can actually learn something from documentaries. And, thus, become an instant, insufferable expert.

For example, I saw a camel-caravan of documentaries about Egypt, from FAROUK: LAST OF THE PHAROAHS (1970) to UMM KULTHUM: A VOICE LIKE EGYPT (1996) to WE ARE EGYPT (2012). It's made me something of an overnight authority on Egyptian affairs. You want to know something? Of all the crises to afflict that ancient and fascinating nation, rampaging resurrected mummies really haven't been a major issue. You'd never know that from Hollywood.

That's the glory of documentaries, making one a Mr. Know-It-All on everything. I bet I could fake my way into a college lecture gig on Egypt right now - or at least I could if I were a young blonde cutie. Then again, I could get most any gig I asked for if I were a young blonde cutie, even in this deathbed Cleveland economy. Just had a lively discussion on that theme with a male co-worker during one of my minimum-wage jobs.


The interesting thing about the new Egypt-centric documentary THE SQUARE is that, well, yes, it's tightly focused (no prologue showing how things came to this stage) on the recent political upheavals in the capital city of Cairo, the nonfiction narrative could just as well be a timeless portrait of how would-be reformers and idealistic revolutionaries fall out over time and wind up enemies, erstwhile comrades now at each other's throats. So it was in Czarist Russia, so it was in Marie Antoinette's France, and so it is with this particular fading flower of the "Arab Spring."

The title refers to Tahrir Square, a Cairo promenade that's become a symbolic stronghold for dissidents and protesters against the longstanding military regime of the repressive Mubarak government. In early 2011 we meet a coalition of pro-democracy forces from across the country's ethnic, political and religious spectrum, all coming together (and, in what would be emblematic of the Arab Spring, united through online social media) in single-minded determination to get Mubarak to step down and the military to allow fair and free elections at last.

A trio of key protestors are followed closely by director Jehane Noujaim. Ahmed (no last name given; it's not unreasonable for dissidents to be tortured and killed) is something of a propaganda painter and college student. Khalid Abdalla, on the other hand, is widely known, as an actor who appeared in THE KITE RUNNER. He's well-spoken and good looking, and at no point does anyone question whether being in the forefront of Tahrir Square protests is just good career exposure (it only occurs to me because I'm American and cannot account otherwise how so many of our Left Coast thespians and entertainers come out of the woodwork for photo opps for Obama or global warming). Magdy Ashour is a Muslim, allied to the Muslim Brotherhood party, but risking his safety along with all the others to build a better Egypt.

Bowing to overwhelming public pressure, Hosni Mubarak steps down in 2011, but the military is still firmly in charge, dispersing strikes and protestors around the square. When elections finally are held, they go the way of Magdy's Muslim Brotherhood. And, guess what? Secular Egyptians in the democracy movement harbor just as much unease and distrust at the pro-Islamic political party as many of us here.

The other activists soon accuse the Muslim Brotherhood of "selling out," stealing the election and being in cahoots with military authorities. Demonstrations in Tahrir Square (when they're allowed to take place at all) now turn against MB leader Mohamed Morsi, who is soon perceived as even worse than Hosni Mubarak. Magdy, meanwhile, supports Morsi. And thus does the onetime fellowship of the rebels disintegrate before our eyes.

At mid-point, with street violence and attacks continuing, Ahmed walks the streets reciting a soliloquy that you citizens out there in every country should memorize: "Enough of this. All the politicians are failures. The Muslim Brothers, the Salafis, the Socialists, the Liberals, they're all failures!"

I would like to request that Jehane Noujaim do an insert right there with me saying, "I'm Charles Cassady Jr., and I approve this message." From what I've read, she truly risked her life to get footage during the riots, so what I ask really shouldn't considered too much.

Much as it's a sidebar that would violate the filmmaker's cinema verite style, I do wish viewers of THE SQUARE had the background to know what I knew, (because WE ARE EGYPT told me so), specifically insofar as Mubarak's military government deliberately permitted the Muslims, alone over about two dozen other opposition parties, to gain a few rare seats in the Egyptian Parliament from time to time. It was a foxy move that allowed Cairo to shake down Washington D.C. and Barack Obama for continuing support and foreign-aid dollars. The message was basically, see what happened? If our government falls, the Islamic radicals will take over. Funny-sad thing is, that turned out to be fairly accurate - although partisans like Magdy Ashour would say the Muslim Brotherhood was a popularly supported party that won power fair and square. Well, about as fair and square as things can get, in present-day Egypt.

From time to time it's been observed that of all the major revolutions in world history, the American Revolution is virtually alone in not resulting straightaway in a bloodbath purge among the victors, one faction of the victors turning against and massacring another as their vast differences surface. Though some revisionists claim that's exactly what went down in the Civil War...no, I don't buy it. Keep that in mind, and watching THE SQUARE may make you prouder to be American than LONE SURVIVOR. And afterwards, read up on the infamously decadent King Farouk and what came after his overthrow by Nassar. Egyptians probably wish their problems were as simple as rampaging resurrected mummies. (3 out of 4 stars)