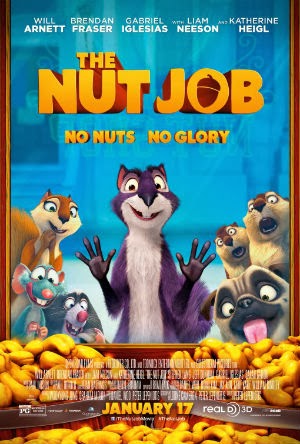 I’m one of those people who always hated working in groups in classrooms and at the office.  Even in grad school I found myself surrounded by lazy ne’er-do-wells who wouldn’t carry their weight, but would happily take co-credit for my labor.  I still prefer autonomy.  But even mavericks and lone wolves need a helping hand (or paw) every once in a while.  Sometimes we might have to spread the wealth or forgo credit entirely in order to benefit greater numbers or even just to keep our own moral compasses aligned.

A disenfranchised squirrel learns this hard the hard way in Toonbox Entertainment’s THE NUT JOB, whose title alludes to the rogue protagonist’s mental state as well as the similarly complicated heists perpetrated in crime movies THE ITALIAN JOB and THE BANK JOB.

Fiercely independent squirrel Surly (voiced by Will Arnett) is content looking for his own food in Oakton’s rustic town square.  No ordinary forager, the imaginative schemer concocts elaborate devices a la MISSION IMPOSSIBLE to access seemingly out-of-reach foodstuffs.  Accompanied by silent but devoted rat sidekick Buddy (Eric Bauza), Surly hoards his acorn acquisitions without much thought to the other hungry animals in Liberty Park.  He’s got a selfish streak, and he’s already on the outs with park leader Raccoon (Liam Neeson), who rations meals to the more cooperative members of his creature commune.

Surly is banished from the park when his attempt to plunder a visiting vendor car of roasted goodies results in the fiery destruction of Raccoon’s prized oak tree and all the food stored within.  Blame for the incendiary accident truly lies at the feet of the dashing-but-dense squirrel Grayson (Brendan Fraser), but Raccoon and his furry friends just can’t believe the park “hero” might be responsible for such a mess.

The mid-Autumn mishap comes at a bad time.  Raccoon solemnly informs the rodent residents that they haven’t enough food to last the Winter.  He dispatches Grayson and female squirrel Andie (Katherine Heigl) into town to identify alternate food sources—but neither is prepared for the myriad perils of the city.

Adapting to urban life (after dodging traffic and escaping a trio of mangy rats), exiled Surly discovers that the troublesome vendor cart originated from a newly-opened nut shop, whose bounty of peanuts promises a lifetime of fancy feasting.  Surly determines to rob the joint, faithful Buddy still at his side.

The cashew cache is real, but the store itself is actually a hideout for freshly-paroled career criminal King (Stephen Lang), who plans on knocking over Oakton’s nearby bank.  The crew-cut thug developed a fear of rats in prison, so he’s laid mousetraps everywhere and tasked his girlfriend’s pug, Precious (Maya Rudolph), with pest control.   Human henchman Fingers (James Rankin) and silent assassin Lucky (Scott Yaphe) make it that much harder for Surly to get in and out undetected.

Grayson and Andie eventually catch up with Surly and get hip to his plan.  Andie—who has a soft spot for the renegade rodent—tries convincing him to share with all the Liberty Park critters if his heist is successful.  Life may be for the taking, she reasons, but it’s also for the sharing.  And who knows?  Raccoon just might pardon his past transgressions.

A couple groundhogs and mole are sent to help with the OCEANS ELEVEN-like operation, but the timing of the humans’ own theft leaves Surly and the gang in the lurch.  The park animals are caught up in a high-speed car chase with cops and robbers, and the hair-raising climax sends them rocketing off bridges and plummeting over waterfalls.  A double-agent emerges from the chaos, while other supposedly-altruistic characters are revealed to have ulterior motives.  Meanwhile, a poker-faced cardinal tries thwarting Surly’s efforts.  Conveyor belts, coal chutes, and hoses enliven the action, and a dog whistle becomes an unlikely talisman that tips the odds in favor of anyone possessing it.

We were pleasantly surprised by THE NUT JOB.  The cartoon caper does borrow a bit from prior animated adventures like OVER THE HEDGE, BARNYARD, and MADAGASCAR.  For example, an obnoxious human girl reminded us of the dentist’s niece in FINDING NEMO, and Buddy’s resemblance to RATATOUILLE’s Remy is uncanny.  But Canadian director Peter Lepeniodis—who worked as an animator on CASPER and TOY STORY 2—does a great job expanding his own 2005 short SURLY SQUIRREL into a worthwhile full-length film that’ll dazzle kids even while imparting little life lessons on friendship, loyalty, and generosity.  The parallels between animals and people (and their respective robberies) are clever, the quirky personalities amusing, and the dynamics between the bullheaded extroverts and their quiet, compliant sidekicks is fascinating.

Real heroes usually don’t call attention to themselves, and bona fide friends will invariably reciprocate one’s kindness and trust.  We all know that the jocks, divas, and so-called brainiacs we tolerated in high school often lacked substance and true star-power in areas that truly mattered.  But even today we take for granted that fringe dwellers, oddballs, and “losers” might be the ones who turn the tide.

As for Liam Neeson…we could go on and on about how much we enjoy everything this guy does—even if it’s just in the voice department.  But to expound on his role as Raccoon would risk spoiling the character.  Suffice to say, it’s a riot hearing Neeson give breath to phrases like “backstabbing vermin” and seemingly inane dialogue like “Give me the shiny!” 2 ½ out of 4 stars.