The Lifeguard (now on video) 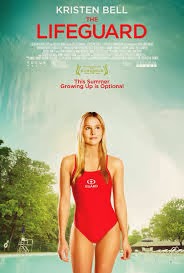 I must confess to be having a sort of Hollywood-blonde fatigue, of longstanding. Sorry, these pretty women all look kind of generic to me, and they merge together in my consciousness. Even their names kind of blur: Kate Hudson, Kate Bosworth, Kristin Bell, Kristin Chenoweth, Katherine Heigl, Kaley Cuocco, Claire Coffee, Radha Mitchell, Margot Robbie, Michelle Williams, Elizabeth Banks, Julianne Hough, whoever the girl was in WARM BODIES... I know one of them is the daughter of Goldie Hawn, one was the lover of Heath Ledger, and one got famous on The Big Bang Theory. Or is that all the same blonde? Who cares? None of them would talk to me in any real-world circumstance, unless they mistook me for a Weinstein brother somehow.

So to behold Kristin Bell in a Baywatch-y swimsuit on the cover of THE LIFEGUARD, one is wont to assume this is yet another forgettable romp, maybe a horndog-teen comedy, in the style of recent cinema des blondes as BRIDE WARS and 27 DRESSES.

Baywatch swimsuit aside, THE LIFEGUARD, written and directed by a woman, Liz Garcia, is a decent enough indie dramedy in the manner of indie dramedies that are…decent enough. Sundance-worthy, in a slow year, and certainly Cleveland International Film Festival worthy – especially if there are pleadings on bent knee for any remote chance of Kristin Bell showing up, and could she please bring husband Dax Shepard to Cleveland, too? We’ll give you both LeBron’s old Key to the City if only you would consent to walk amongst us and pretend to like it.

Bell plays Leigh, a 29-year-old reporter for the Associated Press in NYC. After covering a particularly troubling story AND learning her lover is engaged to another woman, Leigh quits the job and goes back to her hometown in rural Connecticut.

(Nice going, by the way; it would take me something like three lifetimes of newsroom experience, a mountain of cocaine for bribe purposes, and positive references from Ed Murrow, Walter Cronkite and Ernie Pyle to get an employment interview myself at AP – and even then, just for the lowly Cleveland bureau. But a good-looking twentysomething girl, who probably had everything handed to her on a silver platter, she’d impulsively throw such an amazing career away, just like that. I’d have been more offended by that plot detail, had I not actually witnessed such things myself, first-hand).

Moving back in with her rather surprised parents, the onetime ace journalist seeks to avoid her looming 30s by backsliding into what resembles a second adolescence. For subsistence she takes a menial summer job as lifeguard at the community pool. She reconnects with her high-school pal Mel (Mamie Gummer), now a local school administrator somewhat unwilling herself to grow up and start having children with her blandly good-natured husband (filmmaker Garcia cast her own actor-spouse in the part, and gives him some rather unglamorous male-nudity scenes).

Leigh and Mel start hanging out with some mutual acquaintances from pool and from school, discontented teen boys seeking distraction from dysfunctional backgrounds and a community they hate with pot and liquor. Having the two attractive, worldly, older women around changes the slacker guys’ group dynamic, and when Leigh starts sleeping with one of the youths the results are scandalous and shattering. THE LIFEGUARD is kind of billed as a comedy. If this is supposed to be funny I’d hate to see Garcia get tragic on us all.

The storyline’s mopecore melodramatics may be questionable, but the feature also has some of the messiness and arbitrary whiplashes of real life. As a modest little cautionary piece on the dangers of trying to turn back the clock and start (or not start) again, I found THE LIFEGUARD on par with 2013’s overpraised MUD, so those of you left rapt by the latter, check out the former. The acting is tops throughout, and it’s nice watching Bell do material with a fair gravitas, her zero-fat-body in a red swimsuit no less.

Kristin could just as easily be the blonde in a more conventional blockbuster, you know, the one who yells lines like “The reactor’s gonna blow!” or “We’ve got to do something! Superpower-Man’s energy reserves are down to ten percent capacity!” So not all blondes are alike, they’re just cast that way. (2 3/4 out of 4 stars)