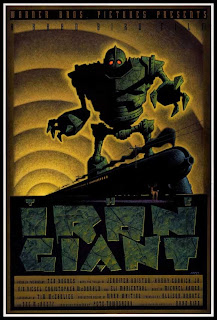 When THE IRON GIANT made its debut in 1999, I worked for a newspaper then, a real one, complete with paychecks. Kind of hard to imagine now… Anyway, I published a rather lukewarm (or luke-cold) opinion of the Warner Brothers cartoon, which was a big rollout for the studio’s amped-up animation division. Then I sat back and watched as every other critic in the country declared the family flick a masterpiece beyond words.

I did feel rather sheepish and lonely in my minority stand, until meager ticket sales ensued. And mighty Warner Brothers got less than…giant…results in their big bid to be an animation powerhouse. Could the American people have shared my cynicism? Or were we all too vulgar and spoiled by the likes of Marvel Comic's Iron Man to appreciate the finer qualities of this robot-monster fable?

The visually-stirring cartoon feature, really more aimed at small fry (despite the PG rating), follows the formulaic boy-and-his-friendly-but-misunderstood-thing science fiction theme. Without too much
variation you could plug in King Kong, Frankenstein's monster, or E.T. Or in this case, a mammoth humanoid robot from space that crashes to Earth off the coast of Maine one night in 1958.

Hiding out in the forest, and occasionally chomping on any pieces of metal it finds, the Iron Giant is befriended and taught to speak by a little boy named Hogarth Hughes, only son of a working war widow. Like any kid, Hogarth brings stray animals home as pets, and the mighty but docile Iron Giant makes the best one yet.

In all movies of this type there seem to be two basic conflicts 1. How to hide your amazing creature from mom (the voice of Jennifer Aniston, by the way), and 2. how to throw off the spying, meanie authority figure who suspects.  In THE IRON GIANT it's a trenchcoated McCarthy-era operative who rents a room in the Hughes home and wants to call the US military in at the first sign of an oversized rivet.

Never fear, you KNOW (or at least I did) that the hulking Giant will redeem himself in the end, even with a last-minute revelation of his origin that's truly an epic burst of virtuoso cartoonery (somebody at Warners has been watching some Japanese anime, by the looks of it), a nice little topping on an already kewl-looking production that mixes classical animation artwork and CGI with finesse.

But the fact is, if it were done as live-action THE IRON GIANT would look as rusty as it is - a second-hand premise lovingly painted over, with a superior vocal cast (dig Harry Connick Jr. as a beatnik junk sculptor, maaaaaan). The retro-1958 setting allows for some seriously outdated propagandizing against the Bomb, a Cold War moral truer to the period than a lot of the dialogue and attitudes (interesting, even in 1999, to see a cartoon that teaches the youth of America to hate and fear their government).

More surprisingly, the film lacks those lame-o musical numbers that taint just about every non-Disney inkstravaganza (and hurt some Disney ones as well). That it doesn't need the looming robot to clomp around in a Broadway song-and-dance is a nice sign of filmmaker Brad Birds' faith in the material.

Still, as a footnote, consider this: musician Pete Townsend produced. Yes, THE Pete Townsend. Townsend has always been a big fan of the storybook The Iron Man, by UK poet Ted Hughes, on which this feature is (very, very loosely) based, and Townsend even did a concept album/stage show inspired by the same material. Too bad his tunes are AWOL.

My 1999 opinion stands. A Pete Townsend soundtrack is just what this likeable but tame giant needs - to rock out.
Posted by Charles Cassady Jr. at 1:01 AM