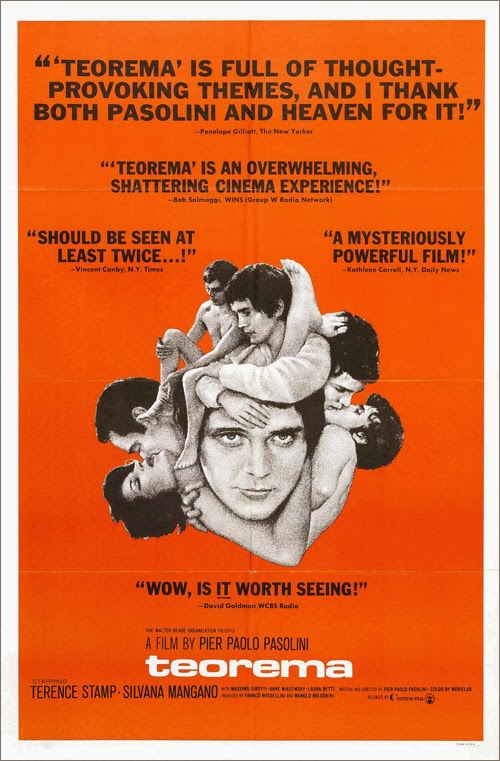 The premise of TEOREMA is that a bourgeois family have their lives disrupted and their values challenged when a mysterious stranger (Terrence Stamp) shows up at their home. Before we get to that, though, the film opens with a reporter questioning a factory worker about his boss, who has apparently just given the factory to the workers. Questions are raised as to how this fits in with revolutionary ideology, and whether there is anything a bourgeoisie like the factory owner can ever do for his workers that would be acceptable.

The film then switches to faux silent movie style as a mailman announces the imminent arrival of a visitor (Terrence Stamp) at the home of an upper middle class family. This is followed by a series of vignettes in which the stranger proceeds to have sex with everyone in the family, including the maid, although all of the action takes place off-screen, so who knows. Regardless, everyone gains some sort of insight into their personal lives and the emptiness of their value systems through contact with the stranger. Once the stranger leaves, the family is forced to confront these issues on their own, some coping better than others, in the film's final section. Every so often, what little there is in the way of a linear narrative gets interrupted by scenes of a smoking, rocky wasteland.

As willfully opaque and affected as the film is, it's not hard to get the message. Director Pier Paolo Pasolini was a communist and a homosexual, and these aspects of his personal life understandably inform his work. Even if you watched TEOREMA without that knowledge in advance, it would be fairly obvioius that the film is a a critique of middle class values and sexual repression. That the film is critical of these things is not the problem; it's that it's so self important and dull about it.

TEOREMA was considered quite shocking by some religious groups on its release in 1968, supposedly for its sexual content, and certainly the communist politics it espouses would not have been popular in all quarters. Aside from one brief flash of female breasts, however, the sexual aspects seem incredibly chaste by today's standards, while the revolutionary politics seem dated and banal.

There's still some pleasure to be taken from Stamp's mostly dialogue-free performance and some of the visuals, and it almost goes without saying that the Ennio Morricone soundtrack is splendid. But TEOREMA is a film wholly of its time, one that feels like the sort of thing that would have been almost obligatory for college student in the late sixties. One can certainly see and appreciate how, in the context of its times, it would have been a bold and groundbreaking film. It just isn't likely to resonate with most contemporary viewers. 2 ½ out of 4 stars.
Posted by Bob Ignizio at 12:29 AM