*Thanks to Grace Snyder for this guest review. The film screened at the Cleveland Cinematheque this past weekend, and Grace was there to see it.

Grace is a student at Kent State student who does her own blog 'Let's Get Critical' which she describes as, "reviews of films from an untrained college student with hopes of becoming a film critic." 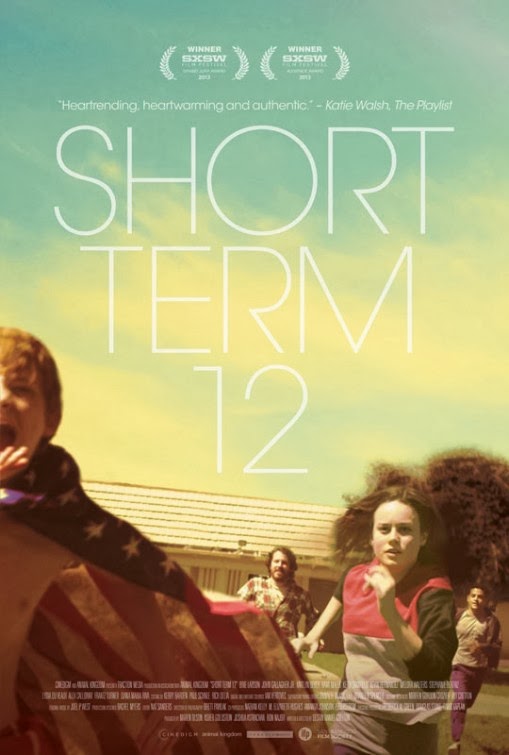 Directed and written by Destin Cretton, SHORT TERM 12 is a feature film expanding on the 2008 short of the same name. The film, based on Cretton's real-life experiences working at a foster home, follows Grace (Brie Larson), the supervisor of a foster home full of underprivileged, abandoned, and abused children. SHORT TERM 12 opens with Grace and boyfriend Mason (John Gallagher Jr.) teaching a new staff member the ropes of the group home. The most important of these being that as staff members they are not parents or therapists; their job is simply to keep them safe. Grace seems to contradict this almost immediately, as it is evident that she has a true passion for helping these kids. However, Grace's passion does not seem to follow through in her own life. She remains emotionally and physically distant from the desperate-to-understand Mason. Despite his efforts, Mason is not able to break into Grace's mind which seems to be deeply troubled for reasons unknown to anyone but herself.

Grace's need to keep her emotions in check change when she meets Jayden (Kaitlyn Dever), a physically and emotionally abusive teenager who comes to live at the foster care center. Grace makes it her mission to understand what Jayden is going through. Through temper tantrums, self-harm, and even an escape from the center, Grace breaks the rule that she preached herself. Grace not only exudes a maternal instinct but listens to and interprets Jayden's cries for help. It becomes obvious that Grace sees a younger version of herself in Jayden and it may be just what she needed to face her own demons.
SHORT TERM 12 is an emotional roller coaster. It takes viewers through the very real ups and downs of living a life "not knowing what a normal life's like" as heard in a rap by one of the oldest at the center, Marcus (Keith Stanfield). There are no frills or any amount of superficiality in this film. The lows consist of heartbreaking moments of abuse and self-injury while the highs evoke genuine love and care between the staff and children and between the children themselves. Adding to the genuine and raw feeling of the film is a brilliant performance by Brie Larson, who is natural and powerful as the tormented Grace, putting her own problems aside in order to help others. It is her realization that she must confront her own past before she can live life happily that ends up driving the sometimes-jumbled plot of the film. Larson's presence mixed with a touching performance by Gallagher and an extraordinary young cast of foster children makes for a sincerely moving film.

Despite the positives, SHORT TERM 12 is missing a strong central plot line throughout and this takes away from the overall quality. The focus does not reveal itself until halfway through the film and leaves a few too many questions to be answered about subplots and supporting characters. SHORT TERM 12 may have missed awards season nominations, but it is not to be ignored. Neither should Brie Larson, who has been nominated by multiple Film Critic Association's for her outstanding performance. It is clear in a performance such as this that she will have a very bright future. 3 out of 4 stars.
Posted by Bob Ignizio at 1:03 AM